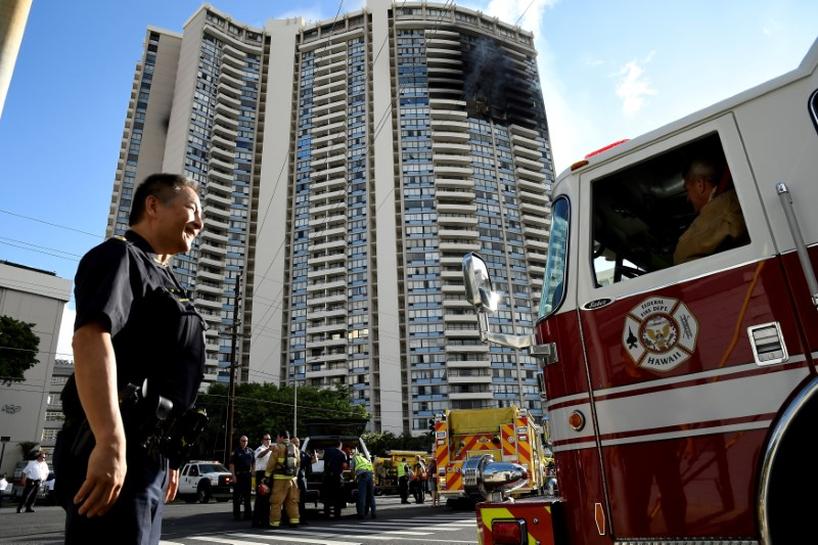 (Reuters) – Honolulu fire officials on Saturday were hoping to determine the cause of a blaze that tore through three upper floors of a 36-story residential tower in Hawaii’s capital, killing at least three people.

The conflagration, which broke out on Friday afternoon and took firefighters about four hours to extinguish, sent debris raining down from the Marco Polo tower onto an oceanfront tourist district, forcing the closure of a major road and sending thick, black smoke billowing over the city.

It also highlighted the absence of sprinkler systems in some older buildings. These became mandatory in Honolulu high-rises in 1974. The Marco Polo, which has 586 units, opened three years earlier.

“Without a doubt if there was sprinklers in this apartment, the fire would be contained to the unit of origin,” Honolulu Fire Chief Manuel Neves told reporters. It took more than 100 firefighters to control the blaze.

The blaze erupted a month to the day after the tragedy at Grenfell Tower, the London high-rise where at least 80 people died in a fire in an older building also unequipped with sprinklers.

Investigators believe the Marco Polo fire broke out on the 26th floor of the building, Honolulu Fire Department spokesman David Jenkins said, adding that investigators hoped to begin nailing down the cause quickly.

Paramedics help a resident of the Marco Polo apartment building after a fire broke out in it in Honolulu, Hawaii, July 14, 2017.Hugh Gentry

During the four-hour battle, firefighters sprayed water on the flames from nearby balconies and hallways while guiding residents out of harm’s way, Jenkins said. The blaze, which destroyed a dozen condominium units and forced the closure of three floors, erupted high above the reach of fire engine ladders, he said.

Firefighters have since gone through rubble-filled condominiums several times to look for any victims beyond the three people confirmed killed, Jenkins said.

The Honolulu Advertiser newspaper reported that most floors of the building were reopened on Saturday afternoon, with residents allowed to return to check for damage and stay in their units if conditions permitted. Several fire-damaged floors remained closed.

Medics treated a dozen people at the site of the fire and five were transported to hospitals in serious condition, Jenkins said. One of those, a firefighter, has since been released after receiving treatment for heat exhaustion.

The victims who died included a mother and her adult son, according to local media. Jenkins declined to identify them.

Witnesses described harrowing moments after the fire broke out on Friday afternoon.

“I looked down. I could see the billowing smoke coming up,” resident Ron Chiarottino said. “I heard three women’s voices screaming, pleading, moaning, ‘Please help me, please’ – continuous screaming for five or 10 minutes, and then I didn’t hear any more.”