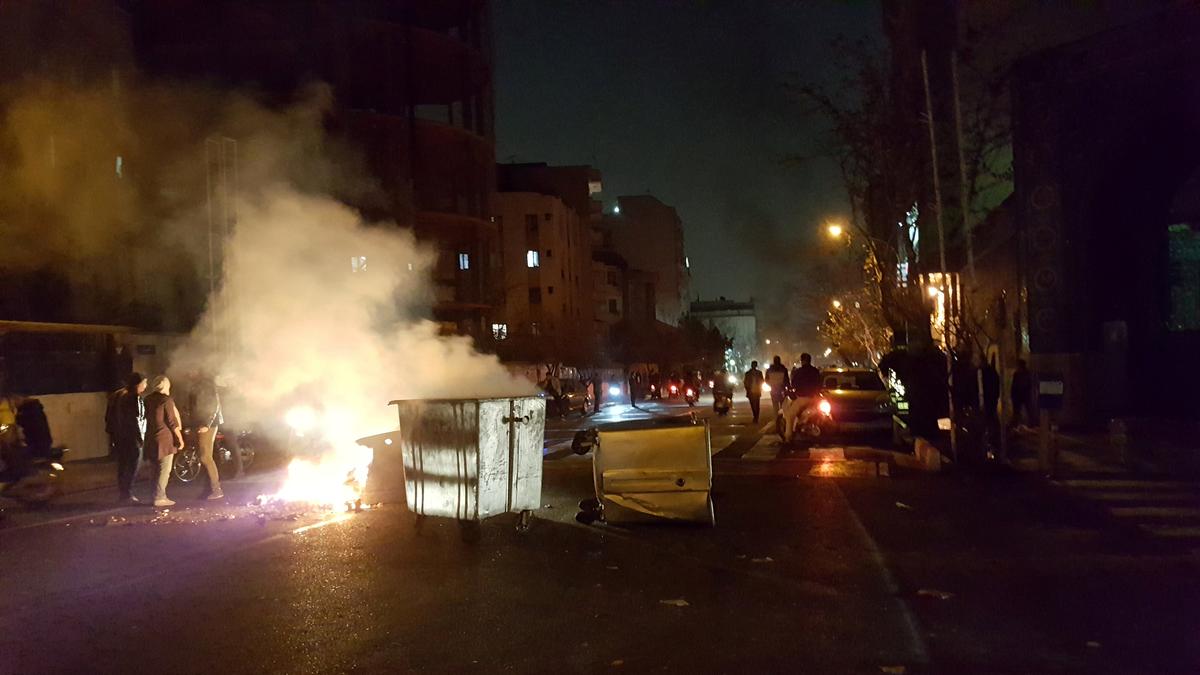 LONDON (Reuters) – Iran warned of a crackdown on Sunday against demonstrators who pose one of the biggest challenges to the government and clerical leadership since a revolution in 1979.

Tens of thousands of Iranians have protested across the country since Thursday against the Islamic Republic’s unelected clerical elite and Iranian foreign policy in the region. They have also chanted slogans in support of political prisoners.

Demonstrators initially vented their anger over economic hardships and alleged corruption but they have also begun to call on Supreme Leader Ayatollah Ali Khamenei to step down.

There were no sign of protests on Sunday and the government said it would temporarily restrict access to the Telegram and Instagram messaging apps, state television quoted an informed source as saying.

The demonstrators also shouted: “Long live Reza Shah”. Such calls are evidence of an unprecedented level of anger and break a taboo. The king ruled Iran from 1925 to 1941 and his Pahlavi dynasty was overthrown in a revolution in 1979 by Ayatollah Ruhollah Khomeini, the Islamic Republic’s first leader.

The protests are the biggest since unrest in 2009 that followed the disputed re-election of then-President Mahmoud Ahmadinejad.

They are particularly troublesome for the government of President Hassan Rouhani because he was elected on a promise to guarantee rights to freedom of expression and assembly.

Rouhani’s main achievement is a deal in 2015 with world powers that curbed Iran’s nuclear program in return for a lifting of most international sanctions. But it is yet to bring the economic benefits the government promised.

“Those who damage public property, violate law and order and create unrest are responsible for their actions and should pay the price,” state media quoted Interior Minister Abdolreza Rahmani Fazli as saying.

Ali Asghar Naserbakht, deputy governor of Tehran province, was quoted as saying by Tasnim news agency that some protesters had been arrested on Saturday.

Protesters defied the police and Revolutionary Guards who have used violence to crush previous unrest. The demonstrations could be more worrying for authorities because they seem spontaneous and lack a clear leader.

People protest near the university of Tehran, Iran December 30, 2017 in this picture obtained from social media. REUTERS.

No political party has urged Iranians to take to the streets and opposition leaders who galvanized Iranians during 2009 are under house arrest. In addition, the range of slogans suggests discontent across social classes with government policies.

Iran has a dual system of clerical and republican rule, in which each faction vies for control. The supreme leader rules for life and is commander-in-chief of the armed forces. He also appoints the head of the judiciary and, in all, has more power over foreign and economic policy than the elected president.

In apparent response to the protests, the government backed down on plans to raise fuel prices, promised to increase cash handouts to the poor and create more jobs in coming years.

“We predict that at least 830,000 jobs will be created in the new year,” government spokesman Mohammad Baqer Nobakht said on state television on Saturday night. He gave no details. Around 3.2 million Iranians are jobless.

Iranians also expressed anger over their country’s costly interventions in Syria and Iraq where it is engaged in a proxy war for influence against regional rival Saudi Arabia.

Videos on social media showed protesters in the city of Shiraz tearing down a banner of Qassem Soleimani, the powerful head of the Quds Force, the branch of the Iranian Revolutionary Guards’ that overseas operations in Iraq, Syria and elsewhere.

The United States condemned the scores of arrests of protesters reported by Iranian media.

President Donald Trump tweeted: “The people are finally getting wise as to how their money and wealth is being stolen and squandered on terrorism. Looks like they will not take it any longer. The USA is watching very closely for human rights violations!”

Trump refused in October to certify that Tehran is complying with its 2015 nuclear deal and said he might terminate the agreement. He also detailed a more aggressive approach to Iran over its nuclear and ballistic missile programs and its support for militant groups in the Middle East.

Canada said it was encouraged by the protests. The country suspended diplomatic relations with Iran in 2012 and called Tehran the biggest threat to global security.

Iranian foreign ministry spokesman Bahram Qasemi was quoted as saying by state media that “Canada’s intervention in Iranian affairs is a violation of international conventions”.

Protesters have attacked banks and government buildings and burned police vehicles. Two demonstrators were shot dead in the western town of Dorud on Saturday night. The deputy governor of Lorestan province blamed foreign agents for the deaths.

“No shots were fired by the police and security forces. We have found evidence of enemies of the revolution, Takfiri groups and foreign agents in this clash,” Habibollah Khojastehpour said on state television. Takfiri is a term for extreme Sunni militants such as Islamic State.

Ahmad Khatami, a hardline cleric who leads Friday prayers in the capital Tehran, called for capital punishment for those chanting slogans against the values of the Islamic Republic.