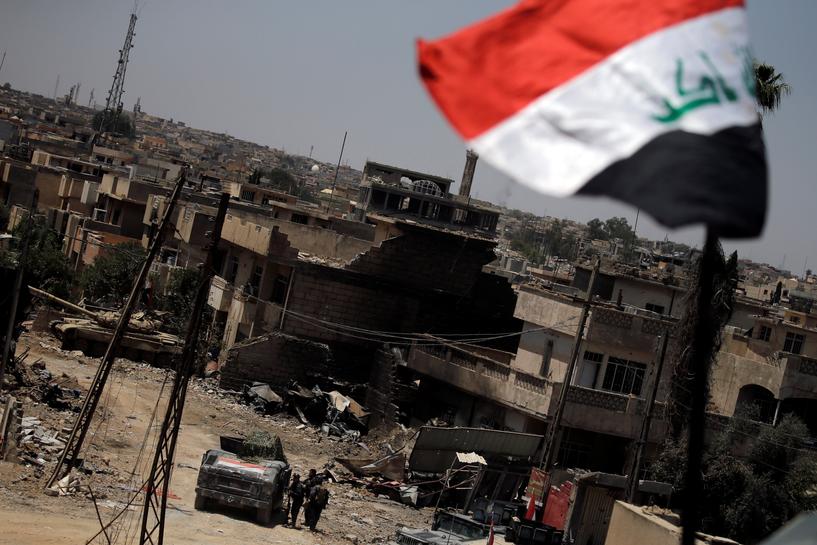 BAGHDAD Shi’ite paramilitaries have captured the Iraqi town of Baaj from Islamic State, further shrinking the northern region under jihadist control as part of a U.S.-backed campaign to retake the city of Mosul, the Iraqi military said on Sunday.

Eight months into the Mosul offensive, Islamic State (IS) militants have been dislodged from all of the city except an enclave along the western bank of the Tigris river.

IS’s grip on the Iraqi side of the northern region along the border with Syria, a desert area where Iraqi and U.S. sources believe IS leader Abu Bakr al-Baghdadi is hiding, has been ebbing as forces fighting on the side of Iraq’s government have advanced.

The Iraqi air force provided cover for the thrust into Baaj of the Shi’ite paramilitaries known as Popular Mobilisation, said a statement from the Iraqi joint operations command.

Popular Mobilisation is steered by neighbouring Shi’ite regional power Iran, an adversary of the United States, but is playing a part in the campaign to defeat Islamic State, an enemy of both, in Mosul and the surrounding province of Nineveh.

While reporting nominally to Iraq’s Shi’ite-led government, Popular Mobilisation has Iranian military advisers, one of whom died last month fighting near Baaj.

Securing border territory between Iraq and Syria is important for Iran to reopen a land route to supply Syrian President Bashar al-Assad’s army with weapons in his protracted war with rebels and militants.

A statement published by Popular Mobilisation announcing the capture of Baaj came from Abu Mahdi al-Muhandis, a prominent leader of the paramilitary with longstanding ties to Iran.

Iran has helped to train and organise thousands of Shi’ite militiamen from Iraq, Afghanistan and Pakistan in Syria’s war. Fighters from Lebanon’s Shi’ite Hezbollah are also working closely with Iranian military commanders in Syria.

Islamic State is still in control of a desert stretch alongside the border south of Baaj, including the crossing of al-Qaim which connects its territory in Iraq and Syria.

U.S. and Iraqi officials believe IS leader al-Baghdadi has left operational commanders behind with diehard followers to fight on in Mosul and is now focusing on his own survival.

The fall of Mosul would, in effect, mark the end of the Iraqi half of the self-styled caliphate declared in 2014 by Baghdadi from the pulpit of one of its old mosques.

But it would still control two smaller Iraqi urban centers: Tal Afar, a city populated by ethnic Turkmen west of Mosul, and Hawija, a pocket between Mosul and Baghdad, the Iraqi capital 400 kms (250 miles )to the south.

In Syria, Kurdish forces backed by U.S.-air strikes are besieging Islamic State forces in the city of Raqqa, the militants’ de facto capital in that country.

For F&B outlets, COVID-19 is a wake-up call. Here are seven changes they can make
Chief Justice grants investigation into Parti Liyani’s complaint of misconduct against prosecutors
South Korea urges people to get flu shots, trust its steps on health
Vietnam Facebook User Arrested For ‘Sharing State Secrets’ in Posts Criticizing Government
Commentary: No worker is untrainable. Employers have to step up to help