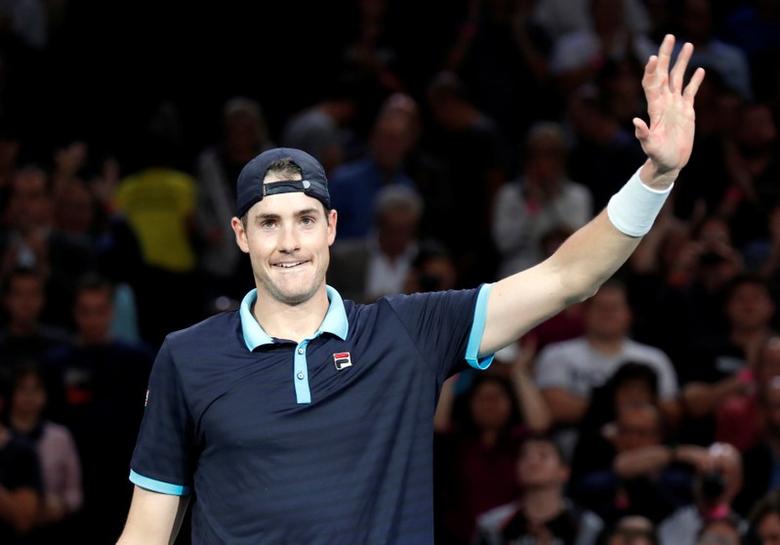 PARIS (Reuters) – John Isner pushed on toward a Tour finals spot on Friday when he made it through to the semi-finals of the Paris Masters with a 6-4 6-7(5) 6-4 win against Argentine Juan Martin Del Potro as the tournament was hit by the withdrawal of Rafa Nadal.

The American, last year’s runner-up, needs to win the tournament if he is to clinch the final berth in the season-ending event at the O2 in London from Nov. 12-19.

Del Potro would have claimed it if he had won, but the ninth seeded Isner was more consistent as he set up a meeting with Serbian qualifier Filip Krajinovic, who advanced after world number one Nadal withdrew injured.

Nadal told a news conference that he was suffering from a right knee problem, leaving his participation in the season-ending Tour finals in the balance and robbing fans in Paris of the tournament’s prime attraction.

The home support had something to cheer, however, when wildcard Julien Benneteau defeated third seed Marin Cilic of Croatia 7-6(5) 7-5 to advance to the last four.

He will face either American Jack Sock or Spain’s Fernando Verdasco.

While the top seeds have been paying the price of a demanding season, Isner has looked fresh and despite allowing Del Potro to level for one-set all with a double fault on set point, the American was a cut above his opponent.

“I definitely wasn’t preparing to play Rafa (in the following round), today, it was all about Del Potro,” he said.

”You would think Rafa, if he took the court would be the favorite in that match. But I think it just goes to show how physical tennis is, especially with someone like Rafa who’s played a lot this year. I don’t know what’s going through his head, but I can’t control that.

“So whether I was playing Rafa or Filip tomorrow, it’s going to be a pretty similar game plan for me. So that’s what I‘m focusing on.”

Benneteau was also the fresher player when he faced Cilic and played the important points far better than his opponent.

Cilic double faulted to hand the opening set to Benneteau and the Frenchman played the closing stages of the second perfectly, wrapping up the match with a superb forehand winner down the line on the Croatian’s serve.