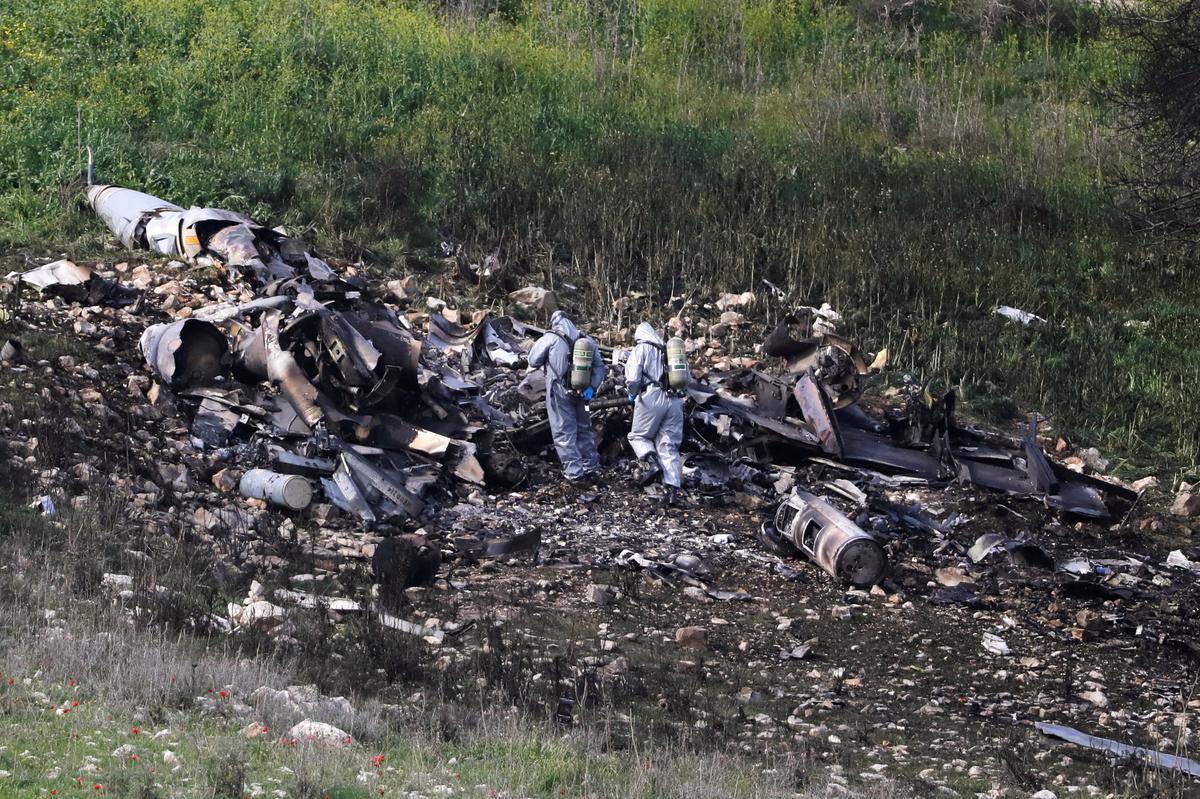 JERUSALEM/BEIRUT (Reuters) – Anti-aircraft fire downed an Israeli warplane returning from a bombing raid on Iran-backed positions in Syria on Saturday in the most serious confrontations yet between Israel and Iranian-backed forces based across the border.

The F-16, one of at least eight Israeli planes despatched in response to what Israel said was an Iranian drone’s incursion into its airspace earlier in the day, was hit by a Syrian anti-aircraft missile and crashed in northern Israel, an Israeli official told Reuters.

Both pilots ejected and were injured, one critically.

Israel then launched a second and more intensive air raid, hitting what it said were 12 Iranian and Syrian targets in Syria, including Syrian air defense systems.

Lebanon’s Iran-backed Hezbollah group said the downing of the plane marked the “start of a new strategic phase” that would limit Israel’s ability to enter Syrian airspace.

Iran’s involvement in Syria in support of President Bashar al-Assad in a nearly 7-year-old civil war – including the deployment of Iran-backed forces near the Israeli-occupied Golan Heights – has alarmed Israel, which has said it would counter any threat.

But Israel and Syria signaled they were not seeking wider conflict, even as Prime Minister Benjamin Netanyahu rushed to military headquarters in Tel Aviv and the pro-Assad alliance pledged a strong response to any Israeli “terrorist action”.

“Israel seeks peace but we will continue to defend ourselves steadfastly against any attack against us or any attempt by Iran to establish itself against us in Syria,” Netanyahu said in a televised statement.

Russia, whose forces began intervening on behalf of Assad in 2015, expressed its concern and urged both sides to exercise restraint and avoid escalation.

Netanyahu said he had spoken by telephone with Russian President Vladimir Putin and that they agreed Israel-Russia military coordination in regard to Syria would continue.

Putin told Netanyahu in the phone call that there was a need to avoid any steps that would lead to a new confrontation in the region, Interfax news agency reported.

A Western diplomat in the region said: “My impression is that it seems to be contained at this point. I don’t think anybody wants to escalate further.”

Saturday’s chain of events began at 4:30 a.m. (0230 GMT) when an Israeli Apache helicopter shot down an Iranian drone over the northern town of Beit Shean, the Israeli military said.

The drone had been sighted taking off from a base in Syria, and was intercepted after it crossed into Israeli territory, spokesman Lieutenant Colonel Jonathan Conricus said.

Israeli planes then struck an Iranian installation in Syria from which, the Israeli military said, the unmanned aircraft had been operated.

The Israeli military released grainy black and white footage of what it said was the drone’s control vehicle in Syria being destroyed.

The F-16 crashed on its return from the mission, coming down in an empty field near Harduf, east of Haifa.

”We heard a big explosion and then sirens. We didn’t know what was happening, we heard helicopters and planes in the air,” said Yosi Sherer, 51, who was staying at a hostel in Beit Shean.

The area was quiet by mid-afternoon.

Conricus said missile remnants were found near the crash site. “We don’t know yet if it’s an SA-5 or SA-17, but it’s a Syrian anti-aircraft missile,” he said.

Israel then launched a second bombing raid in Syria.

The pro-Assad military alliance said Israel had attacked a drone base in central Syria but denied any of its drones had entered Israeli airspace. Iran rejected the Israeli version of events as “ridiculous”.

David Ivry, a former Israeli Air Force chief, told Reuters he believed it was the first time an Israeli F-16 was brought down since Israel began using the jets in the 1980s.

Netanyahu, visiting the Golan on Tuesday, peered across the border into Syria and in public remarks warned Israel’s enemies not to test its resolve.

An official in the pro-Assad alliance said after the downing of the F-16 that a “message” had been delivered to Israel. But he added: “I do not believe matters will develop to a regional war.”

The Israeli military said it did not seek escalation, calling its action a defensive response to an Iranian act of aggression.

“The tough part is how to continue to walk a tightrope, where neither side wants an all-out war, but no one wants to be the one who absorbed the blow and didn’t respond appropriately,” Uzi Rabi, director of the Moshe Dayan Center for Middle Eastern and African Studies at Tel Aviv University, told Israel’s Channel 11 television.

“Israel is our closest security partner in the region and we fully support Israel’s inherent right to defend itself against threats to its territory and its people,” Pentagon spokesman Adrian Rankine-Galloway said.

“We share the concerns of many throughout the region that Iran’s destabilizing activities … threaten international peace and security, and we seek greater international resolve in countering Iran’s malign activities,” Rankine-Galloway said.

U.S. Secretary of State Rex Tillerson is expected to visit the region in the coming week to discuss Syria and other issues, and is scheduled to visit Jordan, Turkey, Lebanon and other countries. Netanyahu said he and Tillerson discussed the flare-up on Saturday.

Tensions also have spiked across the frontier between Israel and Lebanon over Israeli plans for a border wall, and Lebanese plans to exploit an offshore energy block partly located in disputed waters.

Hezbollah and Israel last fought a major conflict in 2006.

In Gaza, the armed wing of the Islamist group Hamas declared full alert among its fighters because of the escalation of violence in northern Israel.

Israel captured the Golan Heights from Syria in the 1967 war and has occupied it since, annexing the territory in 1981 in a move not recognized internationally.

There has been an uneasy standoff since a ceasefire that followed a war in 1973, with United Nations observer forces manning a buffer zone between the two armies.

In November, Israel said it had shot down a Syrian reconnaissance drone over the demilitarized zone, and on Feb. 8 shots were fired from Syrian territory at an Israeli drone, hitting a house in Majdal Shams, in Israeli-occupied Golan.

More than 11,900 bookings made with SingapoRediscovers vouchers on first day of redemption
Tiger’s severed head seized during Thai zoo raid
1,075 new COVID-19 cases and 11 deaths in Malaysia
Chinese lunar probe on way back to Earth
China vows to beef up ‘weather modification’ capabilities