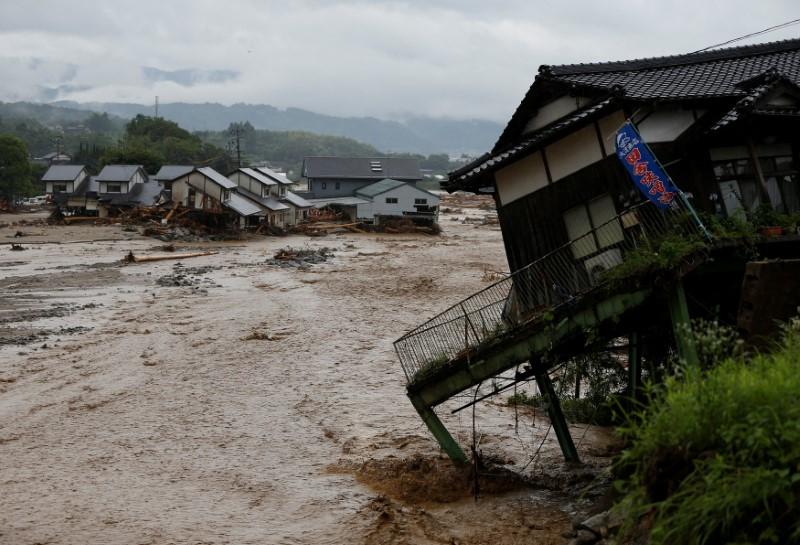 ASAKURA, Japan, July 7 Thousands of Japanese rescuers dug through twisted wood and mud on Friday in the wake of freak rains that killed six people and forced nearly 80,000 from their homes, with more rain falling amid warnings of further landslides.

Parts of Fukuoka, on the southwestern island of Kyushu, were hit by 593 mm (23 inches) of rain in the 48 hours to 9:00 a.m. Friday, well over the rainfall of a usual July, the meteorological agency said.

Heavy rain continued to fall, shifting to the northern part of Kyushu, although emergency rain warnings had been lifted.

Six people had died and at least 22 could not be reached, officials said. Just under 80,000 people were ordered to evacuate, down from more than 400,000 at the peak of the rains, with tens of thousands more advised to leave their homes.

“At first, it wasn’t raining that much,” said Sumie Umeyo, a resident of Asakura.

“But they spoke of record-breaking rain and it started raining heavily, then they began closing the roads. We looked outside and the roads were like rivers,” Umeyo said.

Around 12,300 soldiers, policemen and firemen waded through mud and climbed over piles of splintered wood to reach several hundred people cut off by landslides. Large boulders and uprooted trees littered the landscape.

Fukuoka and neighboring Oita, the hardest hit by the rain, are both largely rural prefectures but rivers were also rising in the city of Kitakyushu, which has a population of some 950,000 and issued evacuation orders for several districts.

The rain was caused by a low pressure area over the Pacific that fed warm, moist air into Japan’s seasonal rainy front.