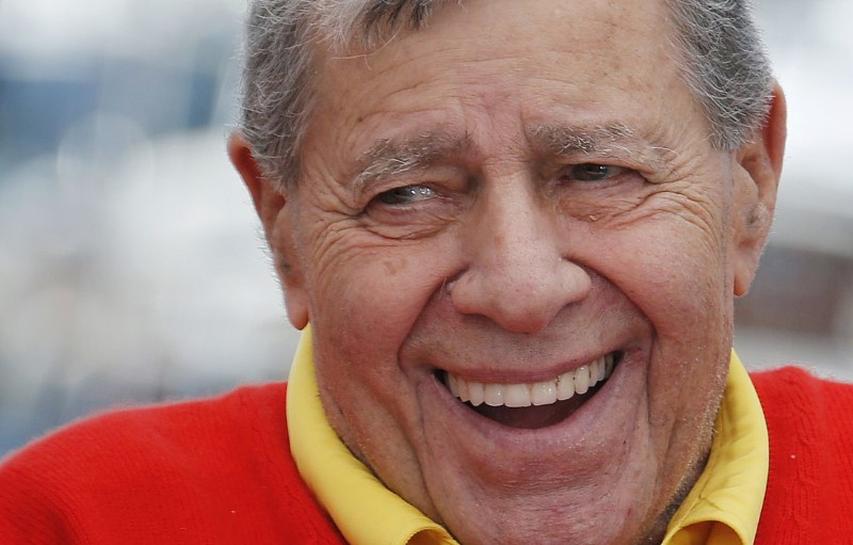 LOS ANGELES (Reuters) – Jerry Lewis, the high prince of low-brow comedy on stage and in movies as well as a fund-raising powerhouse with his annual Labor Day telethon, died on Sunday at the age of 91, his family said.

Lewis died of natural causes at his home in Las Vegas with his family by his side on Sunday morning, his family said in statement.

He had been hospitalized for about five weeks beginning in early June for a urinary tract infection, keeping him from traveling to Toronto to appear in a film, his spokeswoman, Candi Cazau, told Reuters by telephone.

Lewis, who rose to fame as goofy foil to suave partner Dean Martin and was a comic icon in France.

He once summed up his career by saying “I’ve had great success being a total idiot” and said the key was maintaining a certain child-like quality.

“I look at the world through a child’s eyes because I’m 9,” he told Reuters in a November 2002 interview. “I stayed that way. I made a career out of it. It’s a wonderful place to be.”

Jim Carrey, an actor whose style owed a heavy debt to Jerry Lewis, paid tribute to the comedian soon after news of his death.

“That fool was no dummy,” Carrey wrote. “Jerry Lewis was an undeniable genius an unfathomable blessing, comedy’s absolute! I am because he was!”

Lewis was 87 when his last movie, “Max Rose,” came out in 2013, playing a jazz pianist who questions his marriage after learning his wife of 65 years may have been unfaithful.

The son of vaudeville entertainers, Lewis became a star in the early 1950s as Martin’s comic sidekick in nightclubs, on television and in 16 movies. At their height, they set off the kind of fan hysteria that once surrounded Frank Sinatra and the Beatles.

Their decade-long partnership ended with a bitter split and Lewis went on to star in his own film comedies.

Lewis’ movie persona, like the character he created in the act with Martin, varied little from film to film. He was zany and manic, forever squealing, grimacing and flailing his way through situations beyond his control.

He starred in more than 45 films in a career spanning five decades. His cross-eyed antics often drew scorn from critics but he was for a time a box-office hit who commanded one of the biggest salaries in Hollywood.

Long after his celebrity faded at home, Lewis was wildly popular in France, where he was hailed as “le Roi du Crazy” (the king of crazy) and inducted into the Legion of Honor, France’s highest award, in 1984. He received a similar honor in 2006.

He explained his popularity in France, by saying: “The French are very visually oriented even though they are cerebral. They enjoy what they see and laugh. Then, later, they ask why.”

FILE PHOTO – Cast member Jerry Lewis poses during a photocall for the film “Max Rose” at the 66th Cannes Film Festival in Cannes May 23, 2013.Regis Duvignau

Lewis acknowledged that he elicited either love or hate from audiences — and little in between.

“When Jerry Lewis is funny on screen, I swear to God I laugh louder than anyone,” he said. “… When he’s not, he’s the worst there is.”

He first teamed with the debonair Martin in 1946 while they were performing in an Atlantic City, New Jersey, nightclub — Martin as a singer and Lewis as a comic.

Their largely improvised act, with Lewis making wild comic forays into the audience, was an immediate hit. Their 1950 movie debut, “My Friend Irma,” was followed by “My Friend Irma Goes West” the next year.

Their relationship soured, however, and by the time they made their last movie together, “Hollywood or Bust,” they reportedly were not speaking. They parted after a 1956 nightclub show, 10 years to the day after they first teamed.

The split reportedly stemmed from personality conflicts and Lewis’ interest in producing and directing movies. Others attributed it to Lewis’ ego and need for control, as well as a desire for approval from the often-remote Martin.

They reunited in 1976 when Sinatra brought Martin onstage during the muscular dystrophy telethon and they remained friends until Martin’s 1995 death.

Since Martin died, “not a day has passed that Jerry did not think of Dean,” Cazau told Reuters.

In 1960, Lewis made his movie directorial debut with “The Bellboy” and starred in the storybook parody “Cinderfella.” Three years later, he starred in his most popular movie, the self-directed “Nutty Professor,” playing a nerdy academic who makes a potion that turns him into the obnoxiously hip Buddy Love.

Lewis became closely associated with his annual Labor Day telethon to benefit children with muscular dystrophy. He first started doing telethons for the Muscular Dystrophy Association in 1952 before retiring from the job in 2011.

His publicist, Cazau, said that from their inception in 1966 his Labor Day telethons had raised $2.45 billion over some 45 years.

Cazau also said Lewis had been planning to make onstage appearances over the next few months, in New York, and in Las Vegas next year. “He was not a quitter,” she said.

Producers of a remake of the 1970s comedy “Animal House,” were planning to come to Las Vegas for a day so Lewis could have a role in that film, she said.

Lewis had a movie revival in 1983, winning acclaim as an arrogant talk show host kidnapped by an obsessed fan in “The King of Comedy.” He scored another late-career triumph with his 1995 Broadway debut in a revival of “Damn Yankees” and appeared in the film “Funn Bones” that same year.

Lewis was beset for years by numerous ailments, including heart attacks, an inflammatory lung disorder and chronic back pain caused by pratfalls earlier in his career.

Lewis had homes in Las Vegas and San Diego. He had six sons with singer Patti Palmer, including Gary of the rock group Gary Lewis and the Playboys. After a divorce, Lewis married SanDee Pitnick in 1983, with whom he adopted a daughter.

HDB apologises for allocating ‘poorly maintained’ rental flat to single mother
Beijing Revises ‘Correct’ Version of Party History Ahead of Centenary
Cambodia uses wedding halls for COVID-19 patients as cases hit a daily record
Hong Kong to Fire 129 Civil Servants Who Refused to Pledge Allegiance
Surviving recession: I was laid off twice within months. Now I help others like me find jobs