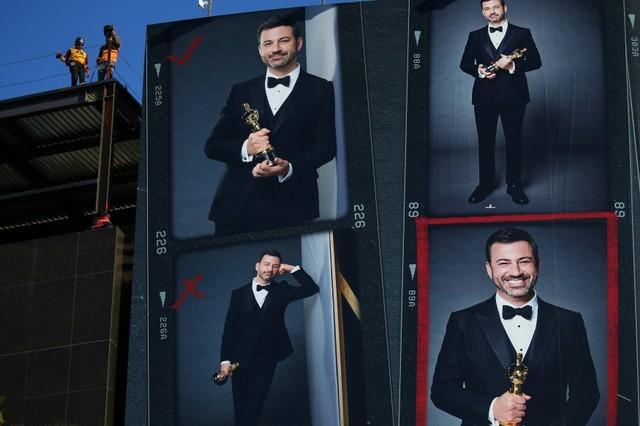 LOS ANGELES (Reuters) – Jimmy Kimmel is in therapy. Last year’s Oscar best picture blunder is giving the Academy Awards host nightmares – or so goes one of the comedian’s video promotions for Sunday’s ceremony.

But the 2017 backstage envelope mix-up that saw the top prize in the movie industry briefly being awarded to“La La Land” rather than actual winner“Moonlight” may pale in relation to the task facing Kimmel when he returns as Oscar master of ceremonies for a second year.

Kimmel must navigate the #MeToo sexual misconduct scandal that has rocked Hollywood in front of a live audience of A-list celebrities, many of whom say they are victims, as well as millions watching at home.

He is also expected to throw in jokes about U.S. President Donald Trump, last year’s best picture flub, the biggest pop culture moments of the past year, and the movies and performances up for the highest honors in show business.

“This year, the casting couch is the target of Hollywood. That’s going to be the theme of the night, from the jokes told by Jimmy Kimmel to the winners who are announced,” said Tom O’Neil, founder of awards website GoldDerby.com

“He can’t avoid the subject of #MeToo and he must treat it with delicacy and sensitivity while at the same time being fearless and lampooning it. So he has a very difficult role,” O’Neil said.

Kimmel, 50, has said little about his plans and is ambiguous about whether he will address the elephant in the room.

“This show is not about reliving people’s sexual assaults,” Kimmel told ABC News earlier this week.“It’s an awards show for people who have been dreaming about maybe winning an Oscar for their whole lives.”

In January Kimmel told reporters that he was“sure that it (the misconduct scandal) will be part of the subject matter of the show.”

Kimmel, known for his genial but deadpan delivery, got high marks as last year’s Academy Awards host when then-newly elected Trump and his policies became a running gag.

Since then, spurred by a heart condition affecting his newborn son, he has adopted a sharper edge on his television talk show“Jimmy Kimmel Live!” where he has attacked Republican efforts to scuttle former President Barack Obama’s healthcare reforms.

He has said he does not intend to use the Oscars“as a platform for healthcare.”

Tim Gray, awards editor at Hollywood trade publication Variety, said it would“look very weird” if Kimmel does not address #MeToo, which has been the number one topic in Hollywood for five months, on the night the movie industry celebrates itself.

“It is a balancing act. You, hopefully, have some observations that people haven’t thought about, which is not easy, but you don’t want to hit people with a sledgehammer,” Gray said.

Nevertheless, Gray said, Kimmel is the right man for the job.

“I think Jimmy Kimmel is really smart and really funny. I think he’ll be fine,” he said.