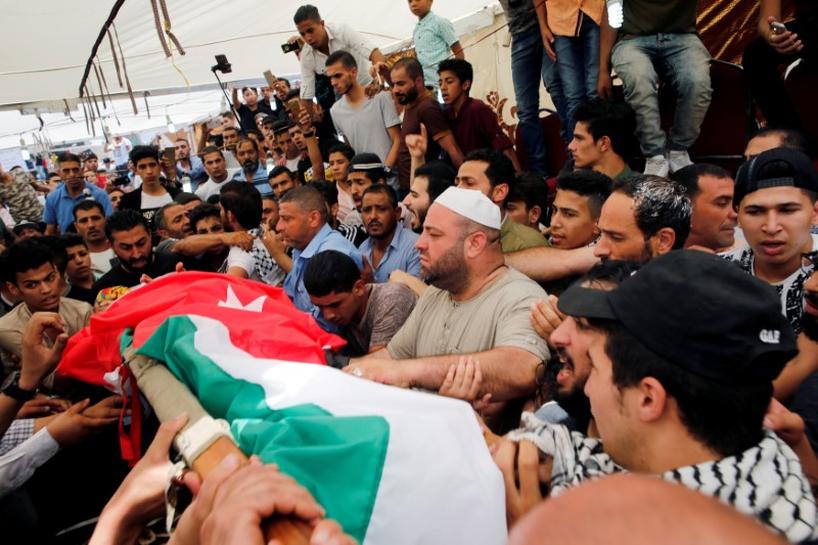 AMMAN (Reuters) – Several thousand Jordanians urged their government on Tuesday to close the Israeli Embassy in Amman and scrap an unpopular peace treaty during the funeral of a young Jordanian shot dead by an Israeli security guard in the embassy.

Dozens of demonstrators chanted “No to an Israeli Embassy or ambassador on Jordanian land!”, and called for a jihad – or holy war – as they carried the coffin of Mohammad Jawawdah, 16, to his burial place in a cemetery in the capital.

Jordanian police said on Monday that Jawawdah, who worked in a furniture firm, had got into a brawl with the Israeli security guard after entering the fortress-like compound of the embassy on Sunday to deliver an order.

They said the Israeli security guard had fired on Jawawdah after the young man attacked him, but did not confirm Israel’s account that he had used a screwdriver to stab the guard in what Israeli officials described as a “terrorist attack”.

Israel said the security officer had acted in self-defense when he shot Jawawdah while his father said the young teenager had no militant links.

The staff of Israel’s Embassy in Jordan, including the security guard involved in the shooting incident, returned to Israel from Amman on Monday.

Responding to public anger that the security guard was able to leave Jordan, Foreign Minister Ayman Safadi said the Israeli had been protected by diplomatic immunity, but he vowed to “get justice” for the victims of what he called a “criminal attack”.

“The government had insisted that the person who committed the crime should not leave”, Safadi said, adding that the Israeli security guard left the country only after the authorities got his testimony to pursue a legal case against him.

“The government acted in a way to ensure the rights of Jordanian citizens,” Safadi said denying any secret deal that allowed his departure.

The father of Mohammad Jawawdah speaks at his funeral in Amman, Jordan July 25, 2017.Muhammad Hamed

The main political opposition, the Muslim Brotherhood, blasted the authorities for handing over the security guard in what it said was an affront to national sovereignty.

“The Jordanian people were shocked by the death of two Jordanians in cold blood and instead of the government doing its duty toward its citizens, we were appalled by its protection of the killer and returning him without punishment,” the mainstream Islamist group said in a statement

Israeli media showed a smiling Netanyahu embracing the security guard after meeting him on Tuesday. He said his government had a “commitment to get you out, that was never a question”.

“You represent the state of Israel and Israel doesn’t forget that for a moment”, Netanyahu added.

Jordan’s peace accord with Israel, the second to be concluded with Israel by an Arab country after Egypt, is unpopular with many Jordanians, many of whom are of Palestinian origin.

Israeli-Jordanian tensions have escalated since Israel installed metal detectors at entry points to the Al-Aqsa mosque compound in Jerusalem’s Old City after two police guards were shot dead by gunmen there on July 14.

The kingdom has seen an outpouring of public anger against Israel in recent days over the Al-Aqsa situation, with thousands of Jordanians demonstrating last Friday against Israel in protests in Amman and in cities and refugee camps across Jordan.

Israel removed the metal detectors on Tuesday in favor of CCTV cameras, hoping to calm days of bloodshed, but Palestinians said the modified security measures were still unacceptable.