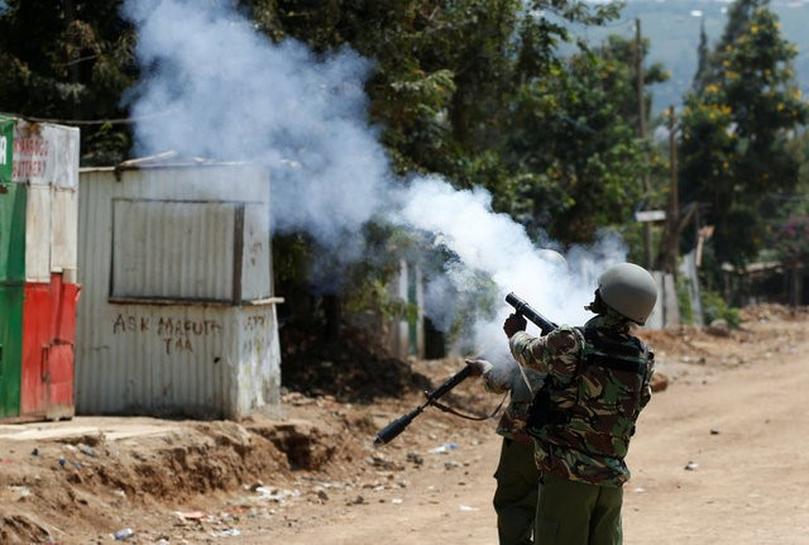 Speaking at a news conference, Odinga urged his supporters to remain calm, but added: “I don’t control the people”. His deputy Kalonzo Musyoka also called for calm but said the opposition might call for unspecified “action” at a later date.

Police fired teargas shortly after Odinga spoke at a group of 100 of his supporters in the western city of Kisumu, which is his stronghold. The unarmed men, who had been chanting “No Raila, no peace,” scattered.

As of 0300 GMT, the election commission website put Kenyatta ahead by 55.1 percent of votes counted to 44 percent for Odinga – a margin of nearly 1.4 million ballots with more than 80 percent of polling stations reported.

The commission later told a news briefing that “all is well”.

Kenyatta, a 55-year-old businessman seeking a second five-year term, had held such a lead since the start of counting after Tuesday’s peaceful vote, the culmination of a hard-fought contest between the heads of Kenya’s two political dynasties.

But Odinga, a 72-year-old former political prisoner and self-described leftist, rejected the results as “fictitious” and “fake”, lashing out in a late night news conference at which he said his party’s own tally put him ahead.

Philippine economy shrinks 4.2% in first quarter
Maldives steps up hunt for suspects after bomb attack on ex-president
PM Lee Hsien Loong and other ministers speak out against racism after alleged attack
Malaysia’s 1MDB, ex-unit seek recovery of US$23 billion in assets
Amid opposition, Japan PM says he has ‘never put Olympics first’