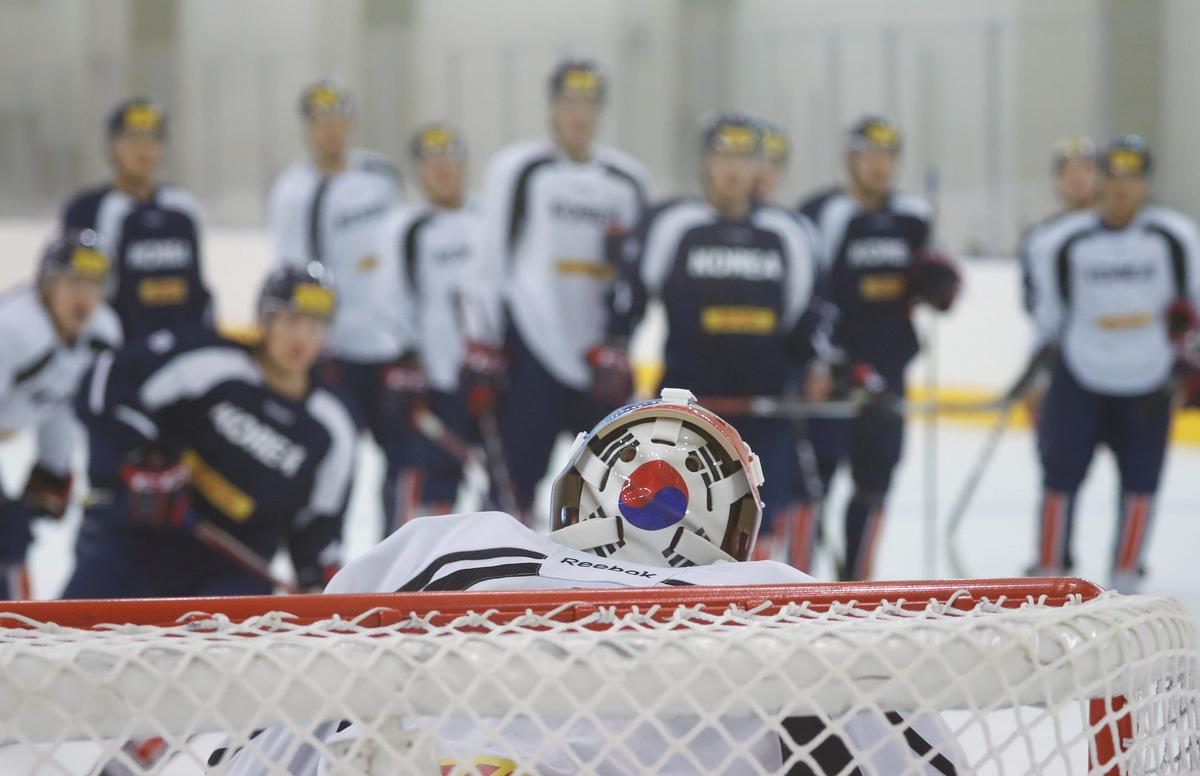 SEOUL (Reuters) – The two Koreas will field a combined women’s ice hockey team and march together under one flag at next month’s Winter Olympics in the South, Seoul said on Wednesday, after a new round of talks amid a thaw in cross-border ties.

North and South Korea have been talking since last week – for the first time in more than two years – about the Olympics, offering a respite from a months-long standoff over Pyongyang’s nuclear and missile programs, although Japan urged caution over the North’s “charm offensive”.

The two Koreas will compete as a unified team in the Olympics for the first time, though they have joined forces at other international sports events before.

North Korea will send a delegation of more than 400, including 230 cheerleaders, 140 artists and 30 Taekwondo players for a demonstration, a joint press statement released by Seoul’s Unification Ministry said, adding the precise number of athletes will be hammered out after discussions with the IOC scheduled for later this week.

Prior to the Games, the sides will carry out joint training for skiers at the North’s Masik Pass resort and a cultural event at the Mount Kumgang resort, for which Seoul officials plan to visit the sites next week.

“Under the circumstances where inter-Korean (relations) are extremely strained, in fact just some 20 days ago we weren’t expecting North Korea would participate in the Olympics”, said Chun Hae-sung, the South’s chief negotiator and vice unification minister.

“It would have a significant meaning if the South and North show reconciliation and unity, for example through a joint march”.

The North Korean delegation will begin arriving in South Korea on Jan. 25, according to the joint statement.

The North will separately send a 150-strong delegation to the Paralympics, Chun said.

Twenty nations meeting in the Canadian city of Vancouver agreed on Tuesday to consider tougher sanctions to press North Korea to give up its nuclear weapons and U.S. Secretary of State Rex Tillerson warned the North it could trigger a military response if it did not choose dialogue.

Japanese Foreign Minister Taro Kono said the world should not be naive about North Korea’s “charm offensive” over the Olympics.

“It is not the time to ease pressure, or to reward North Korea”, Kono said. “The fact that North Korea is engaging in dialogue could be interpreted as proof that the sanctions are working.”

North Korean leader Kim Jong Un has refused to give up development of nuclear missiles capable of hitting the United States in spite of increasingly severe U.N. sanctions, raising fears of a new war on the Korean peninsula. The North has fired test-fired missiles over Japan.

Earlier on Wednesday, state media warned the U.S. of “meddling” in inter-Korean issues at a time when it had to “mind its own destiny rushing headlong into self-destruction”.

“The U.S. is miscalculating,” the North’s Rodong Sinmun newspaper said in a commentary. “Although the U.S. makes desperate efforts to disturb peace while wielding a nuclear stick, it can not provoke us as long as we have the strong nuclear deterrent”.

Seoul has proposed a joint ice hockey team, which triggered an angry response from athletes in the South suddenly being told they may have to play alongside total strangers.

“I don’t know if it will happen, but a joint team will be a good opportunity for ice hockey to shed its sorrow as a less-preferred sport as many Koreans will take interest,” South Korean President Moon Jae-in told players during a visit to a training center.

The number of petitions to the presidential Blue House’s website opposing a unified team shot up to more than 100 this week, with the most popular one garnering more than 17,000 votes.

“This isn’t the same as gluing a broken plate together,” said one of the signers.

The prospect of a combined team had long been unsettling for the South Korean players. As in most other winter sports, the South is much stronger than the North.

“We can only take 23 players to the Olympics, and they thought these North Koreans are going to come in and take our spots”, Murray said.

Chun, the South’s lead delegate, said the decision on a united ice hockey team is not yet finalised, as it requires the consent of the IOC and related international body.

“We’re well aware of the people’s concerns and interests about this”, he told a news conference.

“But I would like you to see the other side that it could make a positive contribution to peace of the Korean Peninsula and improving inter-Korean relations”.

On Tuesday, the North said a 140-person orchestra would perform in South Korea during the Games. Pyongyang is also planning to send a large delegation in addition to the athletes and orchestra.

Paik Hak-soon, the director of the Center for North Korean studies at Sejong Institute in South Korea, said North Korea was using the cheering squad to draw attention to its apparent cooperative spirit.

“Seeing good results in competitions thanks to the cheering squad would enable the North Koreans to say they contributed to a successful Olympics and the South Korean government would likely agree,” said Paik.

“In the end, they are using this old tactic to get to Washington through Seoul.”

Reclusive North Korea and the rich, democratic South are technically still at war because their 1950-53 conflict ended in a truce, not a peace treaty. The North regularly threatens to destroy the South, Japan and their major ally, the United States.

China, which did not attend the Vancouver meeting, said on Wednesday the gathering showed a Cold War mentality and would only undermine a settlement of the North Korea problem.