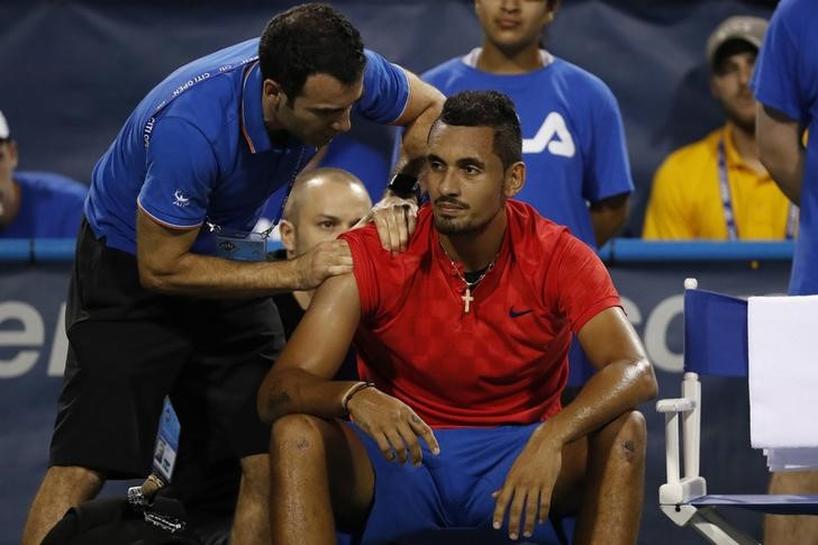 (Reuters) – Injuries continued to plague Australian Nick Kyrgios, who retired with a shoulder injury while losing 6-3 3-0 to American Tenny Sandgren at the Citi Open on Wednesday in Washington D.C. and left the court to a chorus of boos.

It marked the third successive tournament in which the 22-year-old retired during a match.

Kyrgios, playing his first tournament since he retired in the first round of Wimbledon due to a chronic hip injury, said mental problems and physical struggles had hurt his preparations.

He had called out the medical trainer for treatment on his shoulder before retiring and looked in obvious discomfort.

Kyrgios was playing in the second round after receiving an opening round bye and was seeded to play Germany’s Alexander Zverev in a keenly anticipated third-round match.

Earlier, 20-year-old Zverev needed three sets to overcome serve-and-volleyer Jordan Thompson 4-6 6-3 7-6(5) to advance as the Australian dropped the last three points of the decisive tiebreaker including his first double fault of the match.

“I’m just happy to get through that one,” said the fifth-seeded German, a three-time winner this year.

Also failing to advance was defending champion Gael Monfils, as the sixth-seeded Frenchman was upset by qualifier Yuki Bhambri of India 6-3 4-6 7-5.

Bhambri, 25, will move on to face Argentina’s Guido Pella in the round of 16.

Aug 2, 2017; Washington, DC, USA; Nick Kyrgios of Australia leaves the court after being forced to retire due to injury from his match against Tennys Sandgren of the United States (not pictured) on day three of the Citi Open at Fitzgerald Tennis Center. Sandgren won 6-3, 3-0 (Ret’d). Mandatory Credit: Geoff Burke-USA TODAY Sports

Canada’s big-serving Milos Raonic triumphed 7-6(2) 7-6(8) in a hard-fought match against France’s Nicolas Mahut and set a tournament record with a 151 miles per hour rocket among his 26 aces.

“It’s a big chance to turn things around,” he said.

On the women’s side, French second seed Kristina Mladenovic needed nearly two and a half hours in her first match, winning five of the last six games to beat Germany’s Tatjana Maria 7-5 3-6 6-3.