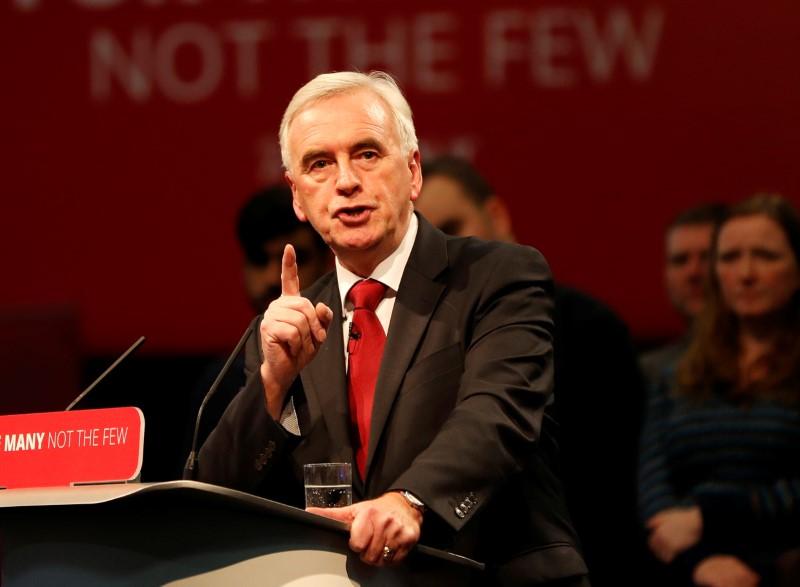 LONDON (Reuters) – The British opposition Labour Party’s finance chief John McDonnell will attend the World Economic Forum in Davos this month to set out his vision for an alternative to the current model of capitalism, his spokesman said on Wednesday.

Davos is a gathering of politicians, central bankers, business leaders and celebrities who debate the world’s problems at the annual meeting of the World Economic Forum in the Swiss Alps. Prime Minister Theresa May is also expected to attend the Jan. 23 to 26 meeting.

McDonnell, socialist Labour leader Jeremy Corbyn’s most senior ally, once listed “generally fomenting the overthrow of capitalism” among his interests in the Who’s Who directory of influential people.

“He will further explain Labour’s vision for an alternative economic approach to replace the current model of capitalism that has failed the many and led to an unsustainable concentration of wealth and power in the hands of a few,” McDonnell’s spokesman said in a statement.

Corbyn and McDonnell have promised a range of sweeping economic reforms if they wrest power from May’s Conservatives, including a debt-funded, 250-billion pound, 10-year investment plan and nationalisation of key industries.

After initially being written off as a misguided throwback to 1970s socialism by some in Britain, including senior members within Labour, Corbyn’s party beat expectations of a wipeout at a snap national election last year, gaining seats and helping to deprive May of an outright majority in parliament.

That has forced some, including major financial investors, to seriously consider the possibility of a Labour government taking control of the country even though the next election is not scheduled until 2022.