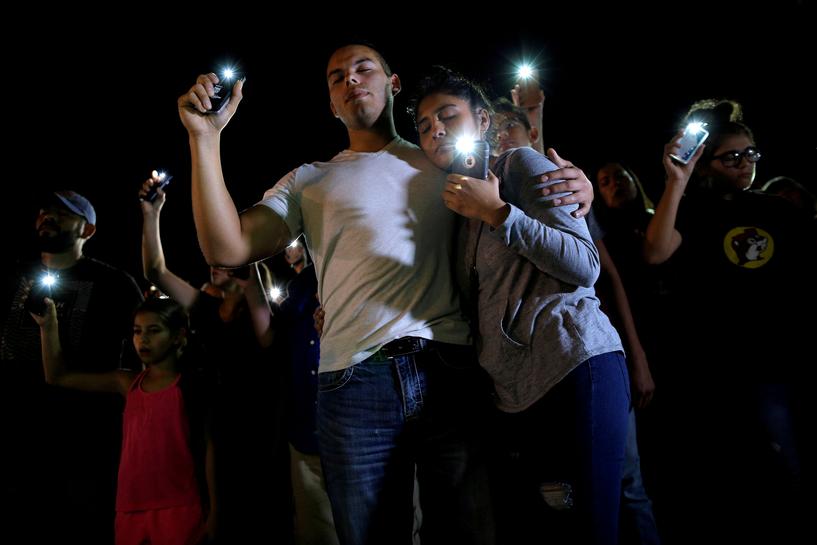 SUTHERLAND SPRINGS, Texas (Reuters) – The man who committed the deadliest mass shooting in Texas history was able to buy guns legally from a sporting goods store because a prior domestic violence conviction was never entered into an FBI database used in background checks, officials said.

Mourners gather at a vigil in memory of the victims killed in the shooting at the First Baptist Church of Sutherland, Texas, U.S., November 6, 2017. REUTERS/Jonathan Bachman

Devin Kelley, the gunman in Sunday’s massacre at a church in rural southeastern Texas, was found guilty by court-martial of assaulting his first wife and a stepson while assigned to a U.S. Air Force logistics readiness unit in 2012, the Pentagon disclosed on Monday.

Texas Department of Public Safety spokesman Freeman Martin put the number of victims killed in the attack at 26, including the unborn child of a pregnant woman who died. The dead otherwise ranged in age from 18 months to 77 years.

Twenty others were wounded, 10 of whom remained in critical condition late on Monday, officials said.

Two handguns were found in Kelley’s getaway vehicle, where he died of a self-inflicted gunshot wound to the head after a failed attempt to flee from the scene of Sunday’s shootings, Martin told a news conference on Monday night.

The Air Force opened an inquiry into how it handled the former airman’s criminal record, and the U.S. Defense Department has requested a review by its inspector general to ensure that other cases “have been reported correctly,” Pentagon officials said.

Firearms experts said the case involving Kelley, 26, who spent a year in military detention before his bad-conduct discharge from the Air Force in 2014, had exposed a previously unnoticed weak link in the system of background checks.

It is illegal under federal law to sell a gun to someone who has been convicted of a crime involving domestic violence against a spouse or child.

A sporting goods retail outlet said Kelley passed background checks when he bought a gun in 2016 and a second firearm this year.

Neither the NCIC nor two related databases contained any information that would have barred Kelley from legally buying any of three weapons police recovered from their investigation of the slayings, said Christopher Combs, special agent in charge of the Federal Bureau of Investigation office in San Antonio.

A Teddy bear lies under police tape at a makeshift memorial for those killed in the shooting at the First Baptist Church of Sutherland, Texas, U.S., November 6, 2017. REUTERS/Rick Wilking

Police said Kelley stormed into the First Baptist Church in Sutherland Springs, Texas, dressed in black and wearing a human-skull mask, and opened fire on worshippers with a Ruger AR-556 semi-automatic rifle.

Kelley was shot twice – in the leg and torso – by another man, Stephen Willeford, who lived nearby and confronted Kelley with his own rifle as the gunman emerged from the church.

Kelley managed to flee in a sport utility vehicle as Willeford waved down a passing motorist, Johnnie Langendorff. The two then gave chase in Langendorff’s pickup truck until Kelley’s vehicle crashed in a ditch.

Martin later hailed Willeford as “our Texas hero,” crediting him with preventing further carnage in Sunday’s rampage, which ranks as the deadliest mass shooting by a lone gunman in the state and one of the five most lethal in modern U.S. history.

Authorities also said Kelley had been involved in a domestic dispute of some kind with the parents of his second wife, whom he married in 2014, and had sent threatening text messages to his mother-in-law before the shooting.

Although his in-laws were known to occasionally attend services at the church Kelley attacked, Wilson County Sheriff Joe Tackitt said family members were not present on Sunday.

The attack stunned Sutherland Springs, a community of about 400 people. One family, the Holcombes, lost eight members from three generations in the attack, including Bryan Holcombe, an assistant pastor who was leading the service, a relative said.

The first shots came through the windows of the church, according to an account related to CNN by the son of one of the survivors, 73-year-old Farida Brown, who was shot in both legs. The assailant then stalked inside and sprayed the pews with gunfire, walking up and down the aisles targeting people even as they ran for cover or lay on the floor.

Farida Brown was in the last pew, beside a woman who was shot multiple times, her son, David Brown, said.

“She was pretty certain she was next, and her life was about to end. Then somebody with a gun showed up at the front of the church, caught the shooter’s attention. He left and that was the end of the ordeal,” David Brown told CNN.

Martin said investigators found hundreds of spent shell casings inside the church after the shooting, as well as 15 empty 30-round ammunition magazines.

Major shootings in the U.S. – tmsnrt.rs/2AgtU9E