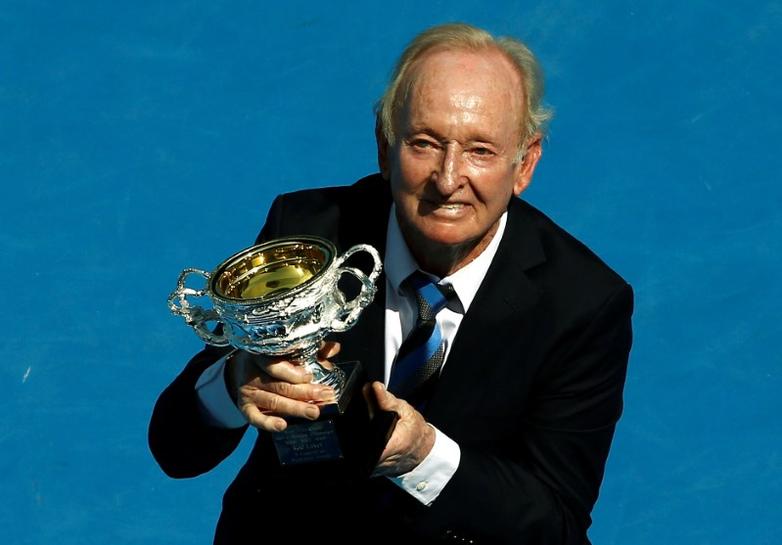 LONDON It cost him five years of grand slam silverware, but Australian great Rod Laver says the decision to turn professional made him twice the player he was as an amateur.

When Laver cleaned up all four grand slam titles in 1962 it seemed ludicrous to suggest he could get any better.

But the man nicknamed Rocket was in for a shock when he joined the professional ranks a year later — a move that put his grand slam collection on hold until 1968 when tennis entered a new Open era.

“When I look back, when I turned pro I was shellshocked,” Laver, who will celebrate the 50th anniversary of the groundbreaking 1967 Wimbledon Pro tournament at the All England Club next week, told Reuters.

“I played Ken Rosewall and Lew Hoad and all these guys and I realized that my game was so bad against the pros that I almost had to re-learn so much of the tennis.

“I could win in the amateurs and not really have to improve so much. When I turned pro I thought to myself I’m pretty good but I had a shock, I got beaten all the time.

“I played Lew Hoad 12 or 13 times when I first turned pro and couldn’t beat him once.”

Before 1968, tennis was split between amateurs, who were allowed to play in the grand slams, and professionals – like Rosewall, Pancho Gonzales, Hoad and Laver – who could not.

They played instead on a professional circuit that included the World Professional Championships at Wembley.

The 1967 Wimbledon Pro event, which took place a few weeks after the actual Championships that year, paved the way for the decision to allow professionals to play in the slams.

Laver, now 78, returned with a vengeance winning Wimbledon in 1968 before going on to win another calendar slam in 1969 — the only player to achieve the feat twice.

“I improved 100 percent as a professional while I was unable to play in the majors,” Laver said.

“I know that a lot of amateur officials and players thought that the pros couldn’t be very good because we just played against ourselves all the time… so I told them they shouldn’t believe that.

“The pros were tough and fast and you needed a big first serve and good second serve. You had to play more of a percentage game that we see today. As an amateur you didn’t need to do that and you would still win.

“We didn’t have to practise much either because we just played matches. I remember playing 28 days in a row in Europe.”

While Laver says the brave move of Wimbledon to invite professionals helped transform tennis into the success story it now is, he says it would be wrong to discount the amateur era as any less important.

“You can’t forget people like (Bill) Tilden, (Don) Budge and (Fred) Perry because they are the ones that made the game,” he said.

HSA warns against weight loss products found to contain banned subtance and laxative
Former Hong Kong chief does not rule out return to post
At least 4 dead as Myanmar police crack down on protests for the second day
Green Plan 2030 aims to use ‘government influence in a more concrete way’: Grace Fu
PUB to study ways to protect Singapore’s north-west coast