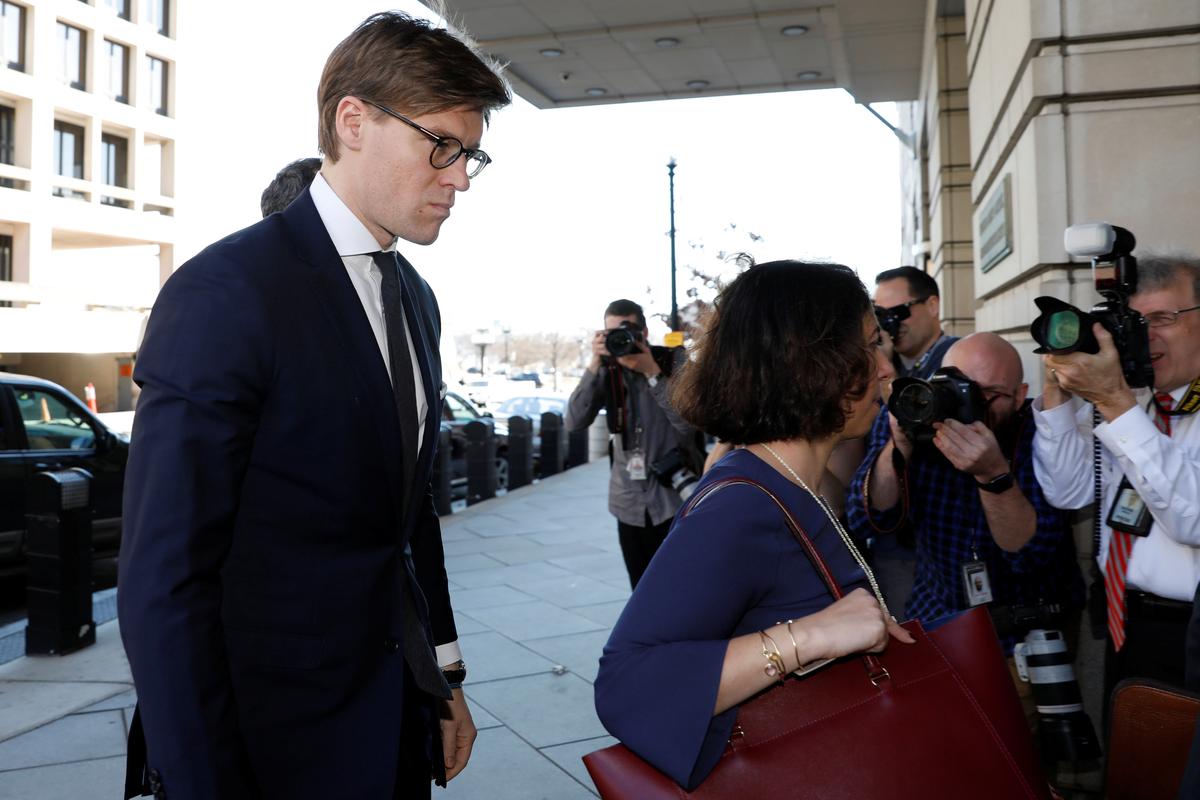 WASHINGTON (Reuters) – U.S. Special Counsel Robert Mueller on Tuesday stepped up pressure on two former Trump campaign aides to cooperate in his probe into possible collusion with Russia, unsealing criminal charges against a lawyer for allegedly lying to the FBI.

The attorney, Alex van der Zwaan, the son-in-law of one of Russia’s richest men, was scheduled to enter a plea to charges on Tuesday afternoon in U.S. District Court in Washington, D.C.

The two former aides have been charged with conspiracy to launder money and failure to register as foreign agents in connection with work for a pro-Russia Ukrainian party.

The charges against van der Zwaan make no reference to Trump’s campaign or the 2016 election.

But legal experts said the charges would put more pressure on the former Trump aides to cooperate with Mueller as he looks into whether Russia tried to influence the election in favor of Trump by hacking the emails of leading Democrats and distributing disinformation and propaganda online.

The case also appears to underscore the extent of Mueller’s probe and of his interpretation of how far and wide he can investigate.

On Friday, Mueller charged a Russian propaganda arm and 13 Russian nationals with crimes related to their alleged interference in the election.

Lawyer van der Zwaan’s father-in law is Russian billionaire German Khan, the founder of the privately-owned Alfa Bank. Khan was recently named on a list of Russian oligarchs close to the Kremlin that was released by the U.S. Treasury Department.

Even if van der Zwaan “is only cooperating against Paul Manafort, that could be very valuable in the big picture. Prosecutors typically very methodically start with low level offenders and try to work their way up the chain,” said Barbara McQuade, a former U.S. attorney for the Eastern District of Michigan. “My guess is he is cooperating.”

A one-time associate of Mueller described the former Federal Bureau of Investigation director as a “boa constrictor,” whose investigative strategy involves progressively increasing the pressure on his targets. The associate spoke on condition of anonymity.

A trial of Manafort and Gates is tentatively expected this fall, though recent media reports have said that Gates is expected to plead guilty in the near future. If Gates agrees to cooperate in the probe, that could put more pressure on Manafort and others who worked in the Trump campaign.

Trump has called Mueller’s probe “a witch hunt” and Putin denies that his government conducted an operation to influence the U.S. election.

Manafort and Gates worked as political consultants to Ukraine’s former pro-Russia president, Viktor Yanukovych, who was forced from office in 2014. Manafort was close to Ukrainian and Russian political and business figures with ties to Russian President Vladimir Putin.

Yanukovych’s government used the report to justify to the European Court of Human Rights the pre-trial detention by the Ukrainian government of former Prime Minister Yulia Tymoshenko, a Yanukovych rival, who was convicted in 2011 of embezzlement and corruption charges and sentenced to seven years in prison.

The charging document said that while answering FBI agents’ questions about his work on the report, van der Zwaan lied that he last communicated with Gates in mid-August and another unnamed person, only identified as “Person A,” in 2014.

He also told the agents that he did not know why an email between him and Person A was not produced to Mueller’s office.

In fact, the document said, Zwaan’s last spoke to Gates and Person A in September 2016 and secretly recorded both calls. Moreover, he “deleted and otherwise did not produce emails sought by Mueller’s office” and an unidentified law firm, the document continued.

”Mueller is sending a signal to witnesses in this investigation that he is going to charge false statements,“ said Renato Mariotti,” a former federal prosecutor who is running for Illinois attorney general as a Democrat.

The charge against Zwaan and reports that Gates may plead guilty suggest “that Mueller is putting even more pressure against Manafort, which is interesting because Manafort is already buried in an indictment with very serious charges,” Mariotti said.

In a statement on Tuesday, a spokeswoman for the firm said it had terminated van der Zwaan’s employment in 2017 and “has been cooperating with authorities in connection with this matter.”