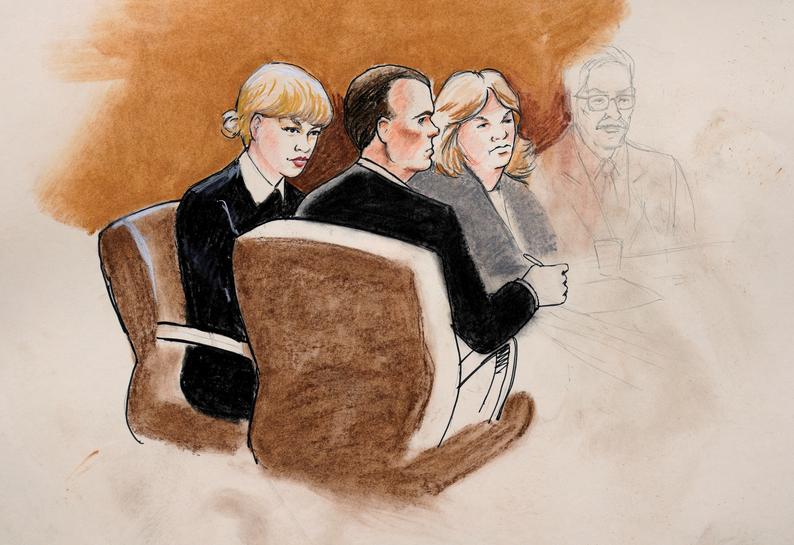 DENVER (Reuters) – Lawyers for U.S. pop star Taylor Swift and the Colorado DJ she accuses of groping her were due to deliver closing arguments on Monday before the federal court jury weighing her sexual assault claims against his assertion that he was wrongfully fired.

The trial stemming from Swift’s allegations against radio personality David Mueller headed into its final phase after the 27-year-old singer-songwriter won an important ruling on Friday, which dismissed the DJ’s accusation that she wrongfully got him to lose his job.

The ruling by U.S. District Judge William Martinez left standing Swift’s assault and battery countersuit against Mueller, who insisted during the trial that he was falsely accused.

The judge also left intact a single claim by Mueller accusing Swift’s mother and another member of her management circle of interfering with his contract, bringing about his ouster from his $150,000-a-year job at radio station KYGO-FM.

The judge previously tossed out Mueller’s defamation-of-character claim against Swift, ruling before the trial that the DJ had waiting too long to file a lawsuit on those grounds.

The weeklong trial stems from allegations by the Grammy-winning artist known for such hits as “Fearless” and “I Knew You Were Trouble,” that Mueller clutched her bare buttocks during a pre-concert fan reception while they posed together for pictures.

Mueller, 55, initiated the litigation, suing Swift, her mother and her radio station liaison Frank Bell for his termination.

The elder Swift said she wanted Mueller fired, and Bell reported the allegation to KYGO management, who sacked Mueller two days after the incident.

FILE PHOTO: A sketch of Taylor Swift and her attorneys in Denver Federal Court during the Swift groping trial in Denver U.S. August 8, 2017. Sketch from August 9, 2017.Jeff Kandyba/File Photo NO RESALES. NO ARCHIVE.

Swift then countersued, saying in her lawsuit that raising the issue of sexual assault “will serve as an example to other women who may resist publicly reliving similar outrageous and humiliating acts.”

During his trial testimony, Mueller denied having touched Swift inappropriately and said the false allegation cost him his career.

“It’s a humiliating experience to be accused of something that despicable,” he said.

When Swift took the stand, she testified that Mueller put his hand under her skirt and “latched onto my bare ass cheek,” causing her to lurch away from him.

A photograph of the incident, shown repeatedly during the trial, depicts Swift flanked by Mueller and his then-girlfriend Shannon Melcher. Mueller’s right hand is concealed behind Swift’s backside, and she appears to be leaning away.

Melcher testified that she did not see anything untoward during the encounter, but added, “I don’t have eyes in the back of my head.”

Swift is asking for a symbolic $1 in damages, but that does not limit what the eight-member jury could award her should she prevail.

“For this reason, any recovery obtained by Ms. Swift will be donated to charitable organizations dedicated to protecting women from similar acts of sexual assault and personal disregard,” the countersuit said.

If Mueller prevails on his claim against Andrea Swift and Bell, any damages would be limited to his two-year contract with the radio station, the judge has ruled.

Reporting by Keith Coffman in Denver; Editing by Nick Macfie