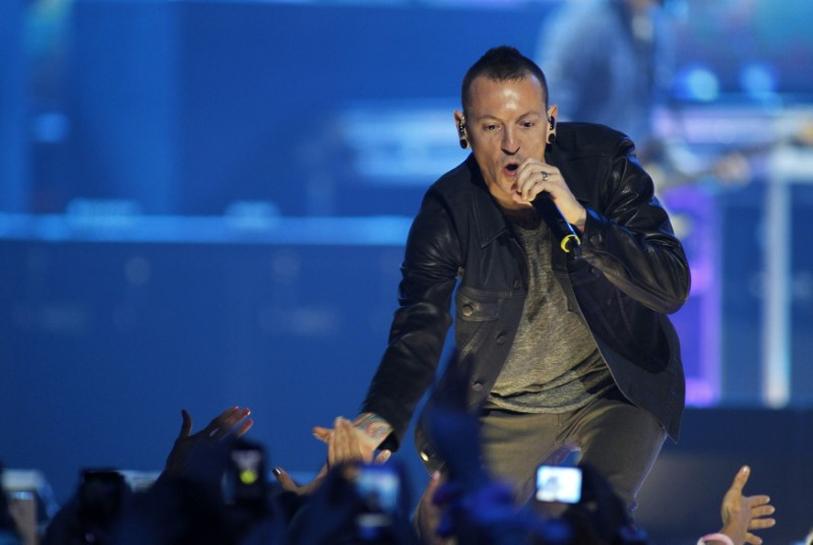 LOS ANGELES (Reuters) – Chester Bennington, the lead singer of Linkin Park, was found dead on Thursday of apparent suicide a week before the California alt-rock band was due to embark on a U.S. tour.

Spokesman Brian Elias said the death was being handled as an apparent suicide, and celebrity website TMZ, citing law enforcement sources, said Bennington had hung himself while alone at the house when his family was out of town.

“Shocked and heartbroken, but it’s true. An official statement will come out as soon as we have one,” tweeted Linkin Park vocalist Mike Shinoda.

Bennington had a history of alcohol and drug abuse. He spoke openly in the past about his struggles to overcome his demons when Linkin Park first found fame in 2000 with their best-selling debut album “Hybrid Theory” and went on to become one of the most popular alt-rock bands of their generation.

The band’s latest album, “One More Light,” was released in May, and Linkin Park had been touring South America and Europe until two weeks ago.

Bennington’s death came a week before the band was due to kick off the U.S. leg of the tour on July 27 in Mansfield, Massachusetts. It also came the same day as the release of Linkin Park’s music video “Talking to Myself.”

“This BREAKS OUR HEART. Suicide is the devil on earth walking amongst us,” tweeted U.S. band One Republic.

Punk rock singer Tyson Ritter, frontman of All-American Rejects, said on Twitter that Bennington was “another gifted voice silenced to the spirit in the sky-forever alive in song.”

Bennington, who was twice married and had six children, was a close friend of Soundgarden front man Chris Cornell, who committed suicide in Detroit in May.

Fans noted on Thursday that Bennington had apparently taken his own life on what would have been Cornell’s 53rd birthday.

“Just when I thought my heart couldn’t break any more,” Cornell’s wife Vicky tweeted on Thursday on hearing of Bennignton’s death.

Linkin Park’s debut album “Hybrid Theory” included hits such as “In the End,” “One Step Closer” and “Crawling,” which won a Grammy award in 2002 for best hard rock performance.

The band experimented with rock, metal and rap, most notably collaborating with Jay-Z in 2004 on the “Collision Course” album. The album, a mash-up of the rapper’s hits with Linkin Park songs, included “Numb/Encore,” which won a Grammy award in 2006 for best rap/sung collaboration.

The band has sold more than 70 million albums worldwide.