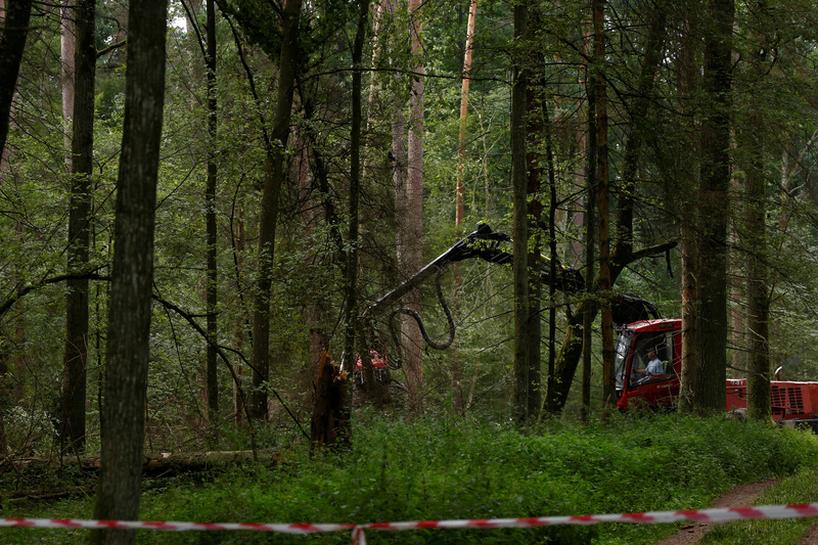 BRUSSELS (Reuters) – Logging in Poland’s Bialowieza primeval forest would add to arguments against Warsaw in the European Union’s investigation on whether Poland is observing the rule of law, the European Commission said on Wednesday.

The European Court of Justice (ECJ) issued an injunction last week with immediate effect ordering the Polish government to stop logging in the north-east Bialowieza forest which is protected under EU environmental laws.

But Poland’s environment minister said on Monday the logging in the UNESCO World Heritage site will continue, straining already tense relations with the EU. Warsaw says logging is needed to halt an outbreak of insect pests.

According to lawyers and non-government organizations, no EU state has previously ignored an injunction by the EU’s top court. Reuters’ witnesses saw that the logging continued on Tuesday and Wednesday.

Asked if defiance could accelerate the Commission’s decision to move to suspend Poland’s voting rights in the 28-nation EU, a Commission spokeswoman told a regular news briefing the EU executive was following the situation with great concern.

If logging is confirmed, “the issue will be taken up in the ongoing rule of law procedure with Poland,” she said.

“Complying with the decision of the court of justice of the EU is an integral part of EU law on which our very union is founded. Poland will have to explain its position in front of the court,” she added.

The Commission would seek confirmation of media reports from satellite images and other sources.

Warsaw and Brussels have been at loggerheads over Poland’s rule of law for months. In July, the Commission launched legal action against what it sees as attempts by the Polish government to undermine the independence of judges.

Poland’s Deputy Environment Minister Andrzej Konieczny told the pro-government news outlet wPolityce.pl that Warsaw will defend what he said was a right to continue a “sanitation harvest” in the forest.

He said the logging is aimed at protecting the Bialowieza forest, home to European bison and rare birds, under the EU’s Natura 2000 program and to ensure safety for the “hundreds of thousands of people” who visit every year.

“This is why our actions will be continued”, Konieczny said. Poland will present its comments regarding the interim injunction by the deadline on Aug. 4, he added.