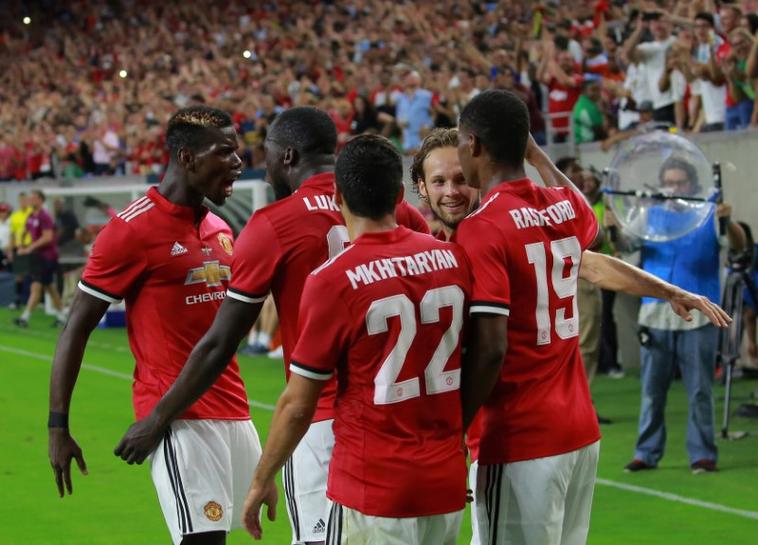 (Reuters) – Strikers Romelu Lukaku and Marcus Rashford delivered a devastating one-two punch just before half time to carry Manchester United to a 2-0 victory over Manchester City in a derby held 5,000 miles from home on Thursday.

Lukaku struck first in Houston in the 37th minute with his second goal for his new club after moving to Old Trafford from Everton last week in a deal reported in the British media to be worth nearly $100 million.

The Belgian found the net with a sensational finish on the half-volley from a narrow angle which exposed the positioning of goalkeeper Ederson, who recently joined City from Benfica for around $45 million.

Two minutes later, Rashford took Henrikh Mkhitaryan’s pass all alone to the right of the City penalty area and placed the ball beyond Ederson to ensure the red half of Manchester prevailed in the first derby played outside England.

The strike duo gave the United faithful hopes of a more explosive attack in the upcoming season by creating numerous chances against City, who were playing their first match of the pre-season in the International Champions Cup opener.

Lukaku missed two more tantalizing opportunities early in the second half, misdirecting a header off a corner from Rashford and then rattling the frame of the goal with a rocket off his left foot.

“I couldn’t be happier with what he’s doing, and I could not be happier we managed to sign him before the pre-season,” United manager Jose Mourinho said of Lukaku on MUTV.

“(He’s a) team player, who holds the ball, who waits for support, who allows the team to leave pressure zones. People look to goals and chances, I have a different perspective.”

The entertaining contest drew a crowd of more than 67,000 to NRG Stadium, home of the National Football League’s Houston Texans.

“It was our first game, a good training (run) against another team,” said City manager Pep Guardiola.