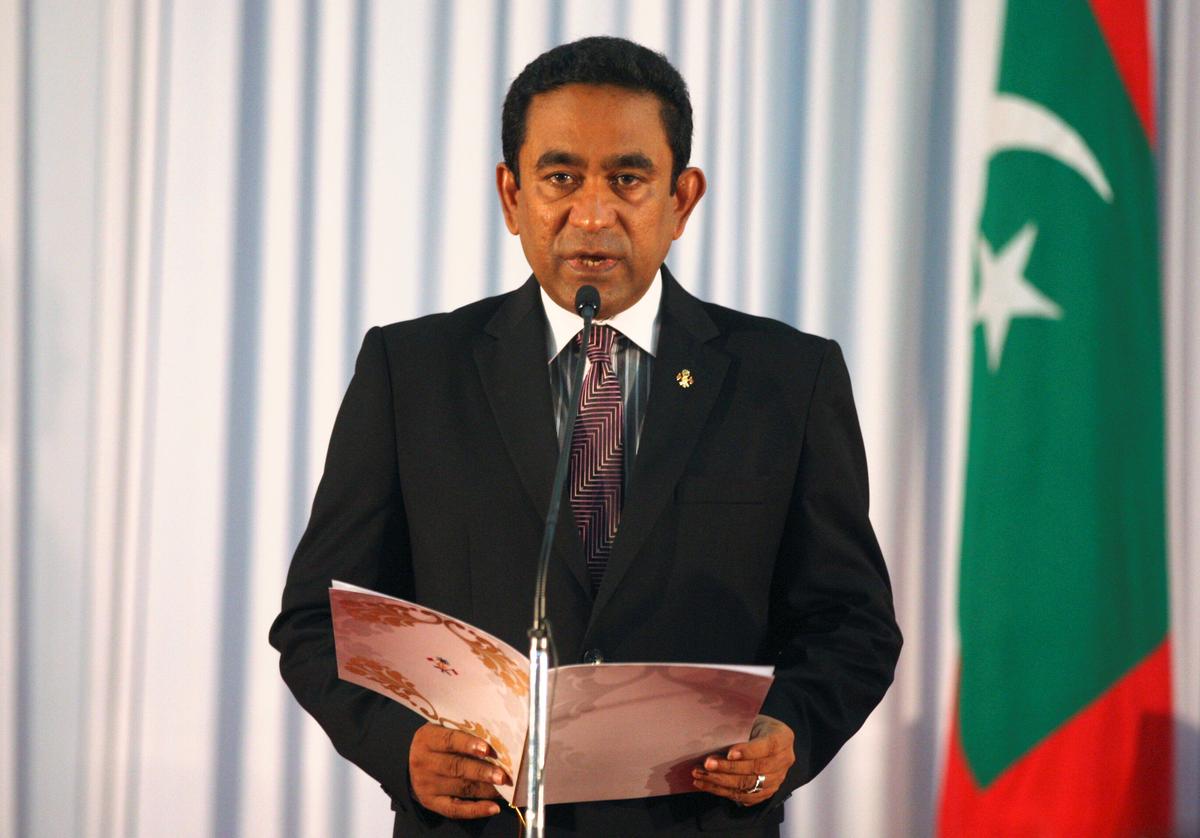 MALE (Reuters) – The embattled president of the Maldives has sent envoys to friendly nations such as China, Pakistan and Saudi Arabia to brief them on a political crisis in the Indian Ocean nation that spurred the imposition of a state of emergency, his office said.

Abdulla Yameen left out key regional power India, which had joined Britain, the United States and the United Nations in calling for the lifting of the emergency and the freeing of two Supreme Court judges whose ruling against Yameen sparked new instability.

The Maldives, best known for luxury tourist resorts, has become another arena of contest for India and China after it signed up to Beijing’s Belt and Road initiative to build trade and transport links across Asia and beyond.

India, which has had longstanding political and security ties to the islands about 400 km (250 miles) away, has sought to push back against China’s expanding presence in the country of 400,000 people, most of them Muslims. Maldivian opposition leaders have urged New Delhi to intervene in the crisis.

Yameen sent his economic development minister, Mohamed Saeed, to China, foreign minister Mohamed Asim to Pakistan and farming and fisheries minister Mohamed Shainee to Saudi Arabia, according to a post on his website late on Wednesday.

“Members of the cabinet, on the direction of President Abdulla Yameen Abdul Gayoom, will visit friendly nations of the Maldives and provide updates on the current situation,” it said.

The government wanted to send a special envoy to India as well but the dates were not suitable for the Indian foreign ministry, said Ahmed Mohamed, the Maldives’ ambassador to India.

The Maldives has been in crisis since last week, when the Supreme Court quashed convictions ranging from corruption to terrorism against nine opposition figures, including former president Mohamed Nasheed, its first democratically elected leader.

Tension came to a head when Yameen’s government rejected the ruling, imposed the emergency for 15 days on Monday and then arrested the chief justice and another judge of the court.

A delegation of diplomats from Britain, the European Union and Germany was denied a meeting with Yameen and his cabinet colleagues, the German embassy in Sri Lanka said.

“Our requests were unfortunately refused. That is surely not the way forward,” it said in a post on Twitter.

The military warned media outlets late on Thursday “to stop spreading information that negatively affect national security and safety and spread fear and discord among the people”.

Independent media outlet Raajje TV suspended its broadcast, saying that “law enforcement refused to adequately address credible threats, and due to the utter lack of an environment conducive to unbiased and independent journalism”.

Nasheed, in exile since he was allowed to go abroad for medical treatment in 2016, urged India to send an envoy “backed by the military” to the Maldives to free the detained judges and political prisoners.

India sent soldiers to foil a coup against the government in 1988 but has since refrained from getting directly involved in the country’s unstable politics.

Experts say it is more likely to put diplomatic or economic pressure on the Yameen government than send its military.

China has warned against outside powers meddling in the affairs of the tiny archipelago and rejected Nasheed’s criticism of its economic involvement on Thursday.

“You also certainly can’t talk about threatening the security of the Indian Ocean region,” he said in response to an article by Nasheed in an Indian newspaper that criticized China for a “land grab” of the islands and for threatening regional security.

Additional reporting by Shihar Aneez and Ranga Sirilal in COLOMBO and Ben Blanchard in BEIJING; Writing by Sanjeev Miglani; Editing by Clarence Fernandez and Paul Tait