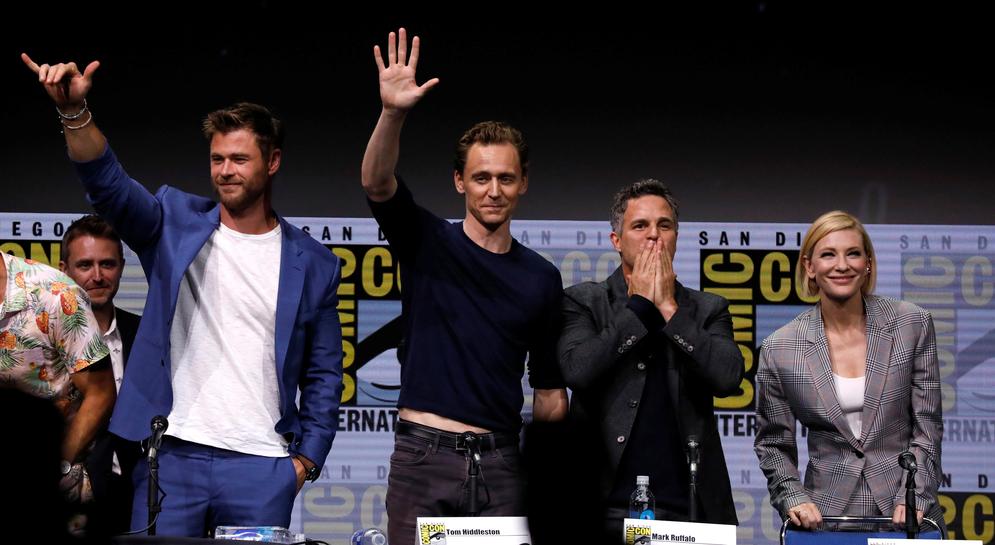 One of the most high-profile draws of the annual convention for pop and nerd culture fans, Marvel’s star-studded panel session on Saturday kicked off with “Thor: Ragnarok,” due in theaters in November.

Director Taika Waititi joined stars Chris Hemsworth, Mark Ruffalo, Tom Hiddleston and Cate Blanchett to discuss how the Norse god has evolved in the film, specifically as he has lost his power-wielding hammer, is trapped on a planet named Sakaar and has to fight in a gladiator contest with the Hulk.

“I’ve played this character five times now … I got a bit bored with myself and wanted to make something different,” Hemsworth said.

Comedy weaves through a trailer that shows Thor meeting the Hulk and filling him in on his status, saying “I’m doing my own thing now, I’m not really hanging out with the Avengers anymore, it all got very corporate.”

As supervillain Hela (Blanchett) takes over Thor’s home planet of Asgard, he must recruit the help of the superheroes, including his mischievous brother Loki, to stop Hela and prevent Ragnarok – the end of the world.

Avid fans, many of whom lined up overnight to get into the 6,500-seat Hall H, gave a rousing standing ovation for the first footage from 2018’s “Black Panther,” in which Chadwick Boseman plays T’Challa, the new king of fictional African nation Wakanda, who is also a deadly superhero.

“T’Challa is someone who got his power from the people around him and his history,” director Ryan Coogler said. “History is something very important to me, my family and African culture.”

Marvel announced that its upcoming female superhero standalone film “Captain Marvel” starring Brie Larson will take place in the 1990s, before the events of 2008’s “Iron Man” that set Marvel’s subsequent film franchise in motion. The villains will be the alien shapeshifters called the Skrulls.

It also revealed new additions to its 2018 “Ant-Man and the Wasp” film, including Michelle Pfeiffer as Janet Van Dyne and Laurence Fishburne as Dr. Bill Foster.