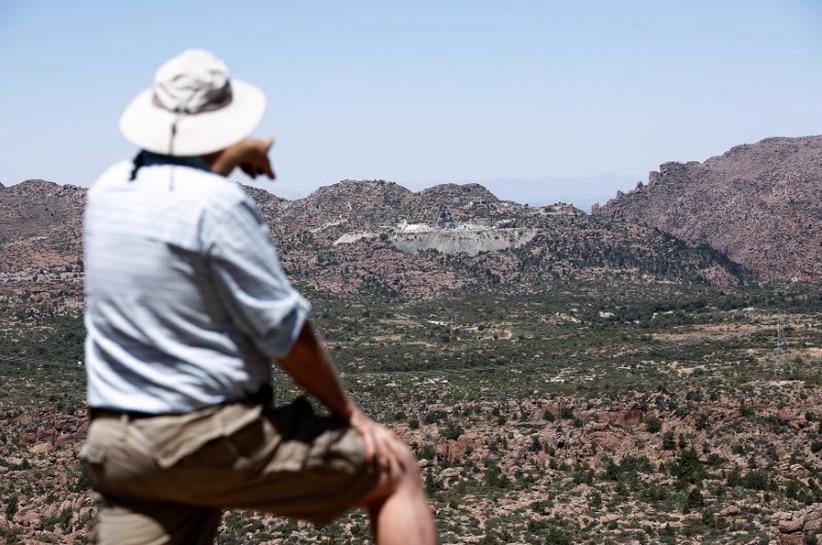 SUPERIOR, Arizona (Reuters) – Rio Tinto’s proposed Resolution Copper Mine in Arizona would tunnel 7,000 feet underground, where rocks radiate heat from the earth’s molten core. It would suck up enough water to supply a city and leave a crater a mile and a half wide and 1,000 feet deep.

Planned for more than a decade, the project would be a prototype for a looming era of more invasive U.S. mines as companies run out of easy-to-reach deposits, geologists say. It is also the project President Donald Trump’s Commerce Secretary, Wilbur Ross, had in mind as he began crafting a “hit list” of regulations that should be killed to speed industrial permitting.

“A company shouldn’t have to be hundreds of millions of dollars into risk money without knowing whether there is a real chance it is going to get approved,” Ross told Reuters in a May 9 interview, referring to the mine.

The massive project – which would be among the world’s largest copper mines – underscores the dangers of weakening America’s rigorous permitting process at a time mining endeavors are becoming increasingly complex and environmentally risky. And Ross’s citation of Resolution as a poster child for suffocating regulation reflects how far the Trump administration is willing to go to advance economic growth.

Sorting out the mine’s potentially negative impacts is anything but simple, and many local residents, along with Native American and environmental groups, say Resolution is exactly the kind of development that cries out for intense public scrutiny – no matter how long it takes.

“The companies have to mitigate their risks – mitigate what people are losing,” said Mila Besich-Lira, the mayor of Superior, the town closest to the project.

A federal government review of the project has drawn about 130,000 comments from concerned constituents – more than 10 times the number who gave input on the smaller Rosemont Copper Mine nearby.

The Resolution mine would also give the region a big economic boost, employing 1,400 people and injecting $20 billion into public coffers, Rio Tinto estimates. It could supply the United States with a quarter of its copper, putting this small town at the epicenter of the global metals market.

Trump has vowed sweep away regulations he says cost America trillions of dollars with no public benefit.

The regulatory review by Ross, due for release as soon as this month, is one of several parallel efforts to slash red tape. Trump has also started dismantling Obama-era climate change regulations through executive orders, for example, and directed agencies to kill two rules for every one they create.

In the meantime, Congress could set the tone. A Republican bill introduced early this year – and supported by Rio Tinto – would set a two-and-a-half-year deadline on mine permitting, a standard similar to that seen in Australia and Canada.

Rio Tinto – along with the Australian mining company BHP Billiton, which owns a 45 percent stake in Resolution – says it has spent 16 years and $1.3 billion on the project, including a decade acquiring acreage in the Tonto National Forest overlying the copper deposit.

It is now four years into the federal regulatory review to approve new mines, a process that can take seven to 10 years. Victoria Peacey, a senior manager for environmental permitting at Rio Tinto, said the mine up probably won’t begin operating for another decade.

Rio Tinto acknowledges the vast scope and sensitivity of its plans.

Resolution will take copper from a zone where temperatures run 180 degrees Fahrenheit. With help from remotely controlled machines, miners will set off explosions to shatter sections of the deposit.

The ore will be milled with a combination of sulfuric acid and as much as 6.5 billion gallons of water a year – enough to supply more than half the homes in the Phoenix suburb of Tempe.

It would eventually render more than 2,400 acres of what is now the Tonto National Forest off limits to visitors.

Roger Featherstone of the Arizona Mine Reform Coalition checks one of the organization’s wildlife cameras in the Oak Flat area near Superior, Arizona, June 13, 2017.Nancy Wiechec

Under the forest, in a process called “block cave mining,” Rio Tinto will excavate material from underground, making the material above sink and creating the expected one-and-a-half-mile-wide crater.

That area will include a site considered sacred to the San Carlos Apache Tribe, which has been holding annual protests against the project.

If Resolution’s copper deposit had been discovered under private land – and not a national forest – Rio Tinto might have been spared the federal review and faced only state regulators. Instead, the U.S. Forest Service is leading the study, which will consider jobs, recreation, public health and wildlife.

Despite its substantial economic benefits to the nearby town of Superior, where many homes and businesses are boarded up, residents still have their concerns.

“What am I going to tell my great-grandkids – how this place was totally destroyed?” said Anna Jeffries, a Superior resident, during an April 2016 public meeting with Forest Service officials at Superior High School.

Mining industry lobbyists counter that they are only seeking an efficient and reasonable approval process.

“We are not talking in any way, shape or form about any environmental rollbacks here,” said Katie Sweeney, general counsel for the National Mining Association, a trade group. “We’re talking about bureaucracy.”

The NMA wants to see deadlines for permitting, along with rules requiring agencies to conduct studies simultaneously rather than consecutively.

The NMA and Rio Tinto back the bill – introduced in January by Republican Congressman Mark Amodei of Nevada – that would give regulators the two-and-a-half year deadline to approve or reject mining projects.

Mining companies in Canada and Australia applaud similar time limits in those countries, but a May 2016 report by a government watchdog in the Canadian province of British Columbia found Canada’s mine regulation had “major gaps in resources, planning and tools” that led to “inadequate” inspections and “increasing environmental risks.”

Commerce Secretary Ross told Reuters in a June 23 phone message he believed the U.S. Forest Service was doing “a good job in terms of Rio Tinto.” But he added, “The rest of the process has been so abysmal that Rio Tinto actually testified before the U.S. Congress [about] how bad the process was.”

Ross and his spokesman did not respond to additional questions seeking examples of problems that occurred between Resolution and permit-issuing agencies.

But his office said he was referring to Congressional testimony given by Rio Tinto’s Managing Director for Copper and Diamonds, Nigel Steward, in March. Steward called the U.S. permitting process “inefficient” and said it “presents a major barrier to the domestic sector’s ability to perform to its full potential.”

Rio Tinto is advocating for more certainty in permitting timelines and improved coordination among agencies involved – along with more money for agencies “to ensure that experienced and highly skilled people are devoted to complex technical aspects of permitting,” said Todd Malan, Rio Tinto’s vice president for external affairs and communications for the Americas.

While the company supports permitting deadlines, at least one Rio Tinto official acknowledges that it would be hard to address the issues raised by the Resolution mine in less than years.

“I’m not necessarily saying time frames would not be helpful, but three years? … That’s a tight time frame,” said Peacey.

“Those are people’s rights,” she said.