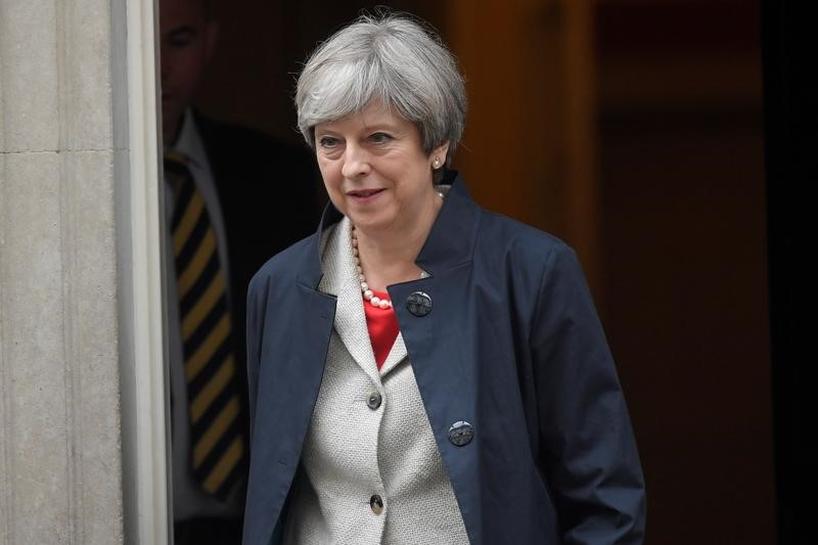 LONDON It’s lonely at the top for British Prime Minister Theresa May but she’s holding on — for now.

May faced calls to quit from inside and outside her ruling Conservative Party after losing its parliamentary majority in an ill-judged election that she did not need to call, plunging Britain into the worst political instability for decades.

She has struggled since then to unite her government on policy and to assemble a new team of aides — one Conservative lawmaker described it as “career suicide” to agree to serve a leader whose days in office may be numbered.

But party sources say moves to oust May are now on hold after senior figures agreed she should be the one to at least make a start on two years of Brexit talks that are likely to stretch her government and possibly the public’s patience, giving the world’s fifth biggest economy some breathing space.

If she fails to make headway or satisfy some of her more eurosceptic party members, then she can answer for it, the party sources said.

“She’ll stay for as long as we want her to,” one lawmaker told Reuters, on condition of anonymity. “Now is not that time.”

Concerns over the reaction of Britons if asked to vote for the fourth time in just over two years, over losing Conservative seats and of having someone else take over the lead in talks with the European Union have calmed calls to replace May.

Even the most embittered lawmakers say a new leadership vote would simply deepen divisions in the party over Brexit and its austerity agenda, blamed by opposition politicians for a devastating fire in west London that killed at least 80 people and for straining a police service battling militant attacks.

May, 60, has said she will carry on, despite her pride being “shattered” by the election, said one veteran Conservative Party member who spoke on condition of anonymity.

“But I suspect her sense of duty is bigger than (predecessor David) Cameron’s,” the source said. “No one actually wants the job, well they do want the job but not now.”

CLEARING UP THE “MESS”

May, Britain’s longest serving interior minister in over a century with a reputation as a tough and diligent politician, became the country’s second female premier after Margaret Thatcher when Cameron resigned after Britons voted for Brexit.

Her path then was cleared when two other hopefuls — her now foreign minister Boris Johnson and environment minister Michael Gove – all but killed off each others’ bids and she appealed to members with her straight-talking can-do attitude.

But her boast that she could never be found “drinking in parliament’s bars” may come to haunt her – having not been part of one of the Conservative cliques, she is very much alone as others in the party plot their routes to power.

The veteran source said her pledge to clear up “the mess” she created by staging the June 8 election had softened many Conservatives, who have traditionally punished leaders over any sign of weakness.

They are also driven by self-preservation. The election revealed the shortcomings of Conservative Campaign Headquarters and some Conservatives say it is time to take stock and restructure before the next election after Jeremy Corbyn’s opposition Labour Party leapt in opinion polls.

“We need to get campaigning again properly, get the message out,” the lawmaker said.

“We have spent years mopping up the mess left by Labour and now we are opening the door to Corbyn. The country will go bankrupt if he gets in and it’ll take us 20 years to get back.”

May has promised to promote reform in the party, but forced to accept the resignations of her two closest aides and a steady departure of senior members of her Downing Street office team, her control is draining away.

Appointed shortly after Britain voted to leave the European Union, May ran a tight ship for months – giving little away, she tried to limit leaks by keeping some of her more publicity hungry ministers in check and sticking to the party line.

Now, they have been let off the leash.

Differences over Brexit strategy and a pay cap on public sector workers are aired almost daily while the prime minister’s projects to bring in more selective schools and give lawmakers a vote on lifting a ban on fox hunting have been dropped.

May, it seems, has retreated.

“Before she could say you’re not going on TV … But now she can’t crack the whip like a prime minister normally does,” the veteran Conservative said.

She has reverted to type, the source said, of the “quiet girl in class who just got on with her homework”, allowing her ministers such as Chancellor Phillip Hammond to take some of the limelight and a more commanding role.

For now, despite differences, her team of senior ministers is at least pulling in the same broad direction, towards a clean break with the European Union that sees Britain out of the bloc’s single market to prioritise controlling immigration.

“It’s a bit like a rowing boat, where everyone is pulling at different speeds, but not hard enough to topple it over,” the veteran Conservative said.