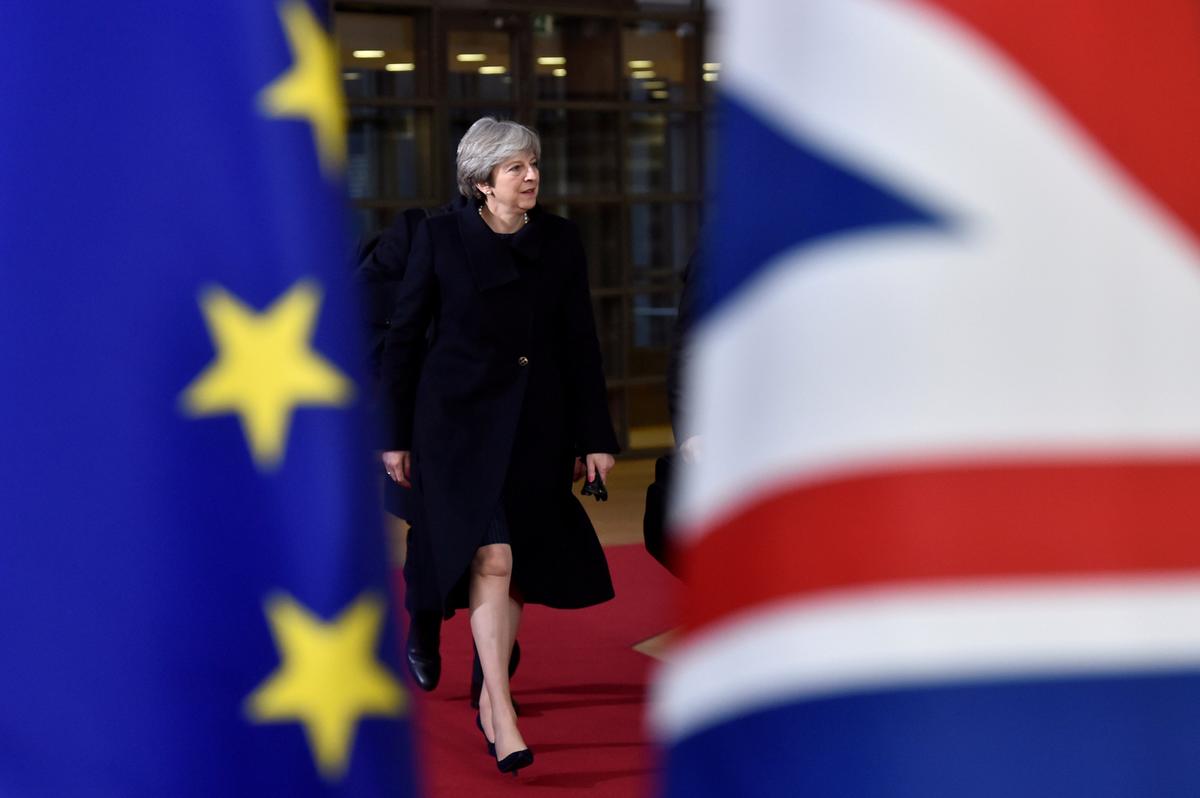 BRUSSELS (Reuters) – European leaders applauded British Prime Minister Theresa May for her work so far on Brexit, assuring her at a summit in Brussels that sufficient progress has been made to allow Britain to move on to the next stage of leaving the union.

A day after she suffered a defeat in parliament over her blueprint for quitting the EU, May told her peers that she was on course to deliver Brexit and urged them to speed up the talks to unravel more than 40 years of membership.

After updating her peers on progress, and telling them that Britain’s departure was “in the best interests of the UK and the European Union”, they offered her a brief round of applause.

“She is our colleague. Britain is a member state. We are not only trying to be, but we are polite and friendly people,” European Commission President Jean-Claude Juncker said.

As she left to return to London — she will not join the other 27 leaders for further discussions on Brexit and the euro zone — May said she was eager to move on, once her peers give the formal green light to trade talks on Friday.

“We’ve had very good discussions,” she said. “I‘m looking forward to the discussions coming out of tomorrow on the future trade relationship and security relationship.”

A British government official said the prime minister was approaching the next phase, which will discuss a transition period as well as the terms of the future trading relationship, “with ambition and creativity”.

German Chancellor Angela Merkel gave her stamp of approval, but cautioned time was running out.

“We made clear that Theresa May has made an offer that should allow us to say that we have seen sufficient progress,” she told reporters. “Nevertheless, there are still a lot of problems to solve. And time is of the essence.”

Summit chair Donald Tusk will call May on Friday to update her after leaders have discussed their next moves on Brexit.

May, weakened after losing her Conservative Party’s majority in a June election, has so far carried her divided government and party with her as she negotiated the first phase of talks on how much Britain should pay to leave the EU, the border with Ireland and the status of EU citizens in Britain.

But the next, more decisive phase of the negotiations will further test her authority by exposing the deep rifts among her top team of ministers over what Britain should become after Brexit.

Acknowledging the difficulties ahead, Tusk warned EU leaders that only the unity they had displayed so far would deliver a good deal on trade — an issue on which the member states have different interests: “I have no doubt that the real test of our unity will be the second phase of Brexit talks,” he said.

The EU is willing to start talks next month on a roughly two-year transition period to ease Britain out after March 2019, but has asked for more detail from London on what it wants before it will open trade negotiations from March of next year.

The deal almost fell apart last week, when May’s Northern Irish allies rejected an initial agreement for fear that a promise to protect a free border with EU member Ireland could separate their region from the rest of the UK.

After days of often fraught diplomacy, May rescued the deal to meet the EU’s requirements for “sufficient progress” but the last-minute wobble by the Democratic Unionist Party, which she depends on in parliament, and the defeat in parliament on Wednesday, underline the tightrope she is walking.

During Thursday’s discussions, she was again keen to show that Britain remains an active member of the bloc for now, committing to staying in the Erasmus university exchange programme until the end of 2020 and taking part in talks on the bloc’s plan for closer defence cooperation.

Over dinner, leaders also discussed responses to the migration crisis from Africa and the Middle East, and lingering deep divisions over how to share the load.

They confirmed a rollover of sanctions on Russia over the Ukraine crisis and reaffirmed their opposition to U.S. President Donald Trump’s move to recognise Jerusalem as the capital of Israel.

After taking on plastic, Bali sisters want bar raised on climate action
US tightens rules on more Chinese media outlets
US Secretary of State Mike Pompeo to visit India next week for strategic talks
Goldman Sachs Singapore to pay authorities S$165 million for role in 1MDB scandal
Commentary: Loan sharks – who’s still borrowing from them in this day and age?