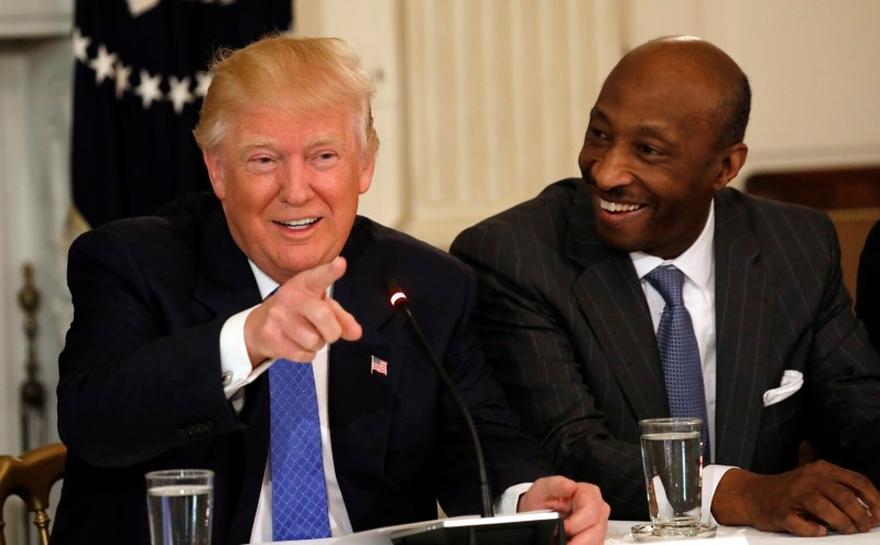 Trump denounced neo-Nazis and the Ku Klux Klan as criminals and thugs on Monday, bowing to mounting political pressure after initially saying many sides were to blame after a white-nationalist rally turned deadly in Virginia.

Frazier, who is African-American, is the only CEO so far to leave one of Trump’s advisory councils because of his reaction to the violence in Virginia. Prominent Democrats and Republicans criticized Trump’s response to the violence over the weekend.

The gathering of hundreds of white nationalists took a deadly turn on Saturday when a car plowed into a group of counter-protesters and killed at least one person.

Trump had said “many sides” were involved, drawing fire from across the political spectrum for not specifically denouncing the far right.

“America’s leaders must honor our fundamental views by clearly rejecting expressions of hatred, bigotry and group supremacy, which run counter to the American ideal that all people are created equal,” Frazier said in a statement announcing his resignation. (bit.ly/2fFnITM)

“As CEO of Merck and as a matter of personal conscience, I feel a responsibility to take a stand against intolerance and extremism,” he said.

Trump responded in a tweet, saying now that “Ken Frazier of Merck Pharma has resigned from President’s Manufacturing Council, he will have more time to LOWER RIPOFF DRUG PRICES!”

The son of a janitor, Frazier joined Merck as general counsel of one of the drugmaker’s subsidiaries in 1992, working his way up to CEO of the company in 2011.

He made his name as the company’s top lawyer, steering it through daunting litigation over Vioxx, its widely used painkiller that was withdrawn in 2004 after being linked to heart attacks.

Many observers thought Merck would eventually have to shell out $10 billion or more to thousands of plaintiffs over the drug’s withdrawal. But Frazier’s legal strategy led to a $4.85-billion settlement in 2007, allowing Merck to refocus on its pipeline of experimental medicines.

Merck shares rose 0.5 percent in afternoon trading on the New York Stock Exchange, roughly in line with the wider market.

Frazier frequently made political contributions during the 2016 election, donating to both Republican and Democratic members of Congress but no donations to a presidential candidate during the year.

The political PAC maintained by Merck and funded through donations from Merck employees made over $1.1 million in candidate contributions during the 2016 campaign – but did not contribute to Trump or his Democratic rival Hillary Clinton, according to documents filed with the Federal Elections Commission.

The Pharmaceutical Research and Manufacturers of America, which represents the pharmaceutical industry and lobbies on its behalf in Congress, declined to offer a statement of support for Frazier or to comment on Trump’s reaction.

The industry’s silence comes as Trump is finalizing an executive order on drug prices that would relax industry regulation and contains measures that, some say, would protect existing drug prices or even increase them.

Individually, at least one CEO, John Maraganore of Alnylam Pharmaceuticals, tweeted his support, saying he was “proud to stand with leaders like Ken Frazier.”

Other top business leaders also spoke out in response to the violence in Charlottesville.

“I support Ken Frazier’s decision. I’m thankful we have business leaders such as Ken to remind America of its better angels,” said Hewlett Packard Enterprises CEO Meg Whitman, who ran for governor of California as a Republican in 2010.

Goldman Sachs CEO Lloyd Blankfein tweeted: “Lincoln: ‘A house divided against itself cannot stand.’ Isolate those who try to separate us. No equivalence w/ those who bring us together.”

Several executives from top U.S. companies have previously stepped down from a number of presidential advisory councils in protest to Trump policies.

The White House said Sunday that Trump’s remarks condemning violence at a white nationalist rally were meant to include the Ku Klux Klan and neo-Nazi groups.

Democrats and Republicans criticized Trump for waiting too long to address the violence – his first major domestic crisis as president – and for failing when he did speak out to explicitly condemn white-supremacist marchers who ignited the melee.

Trump on Saturday initially denounced what he called “this egregious display of hatred, bigotry and violence on many sides.”

On Sunday, however, the White House added: “The president said very strongly in his statement yesterday that he condemns all forms of violence, bigotry, and hatred, and of course that includes white supremacists, KKK, neo-Nazi, and all extremist groups. He called for national unity and bringing all Americans together.”