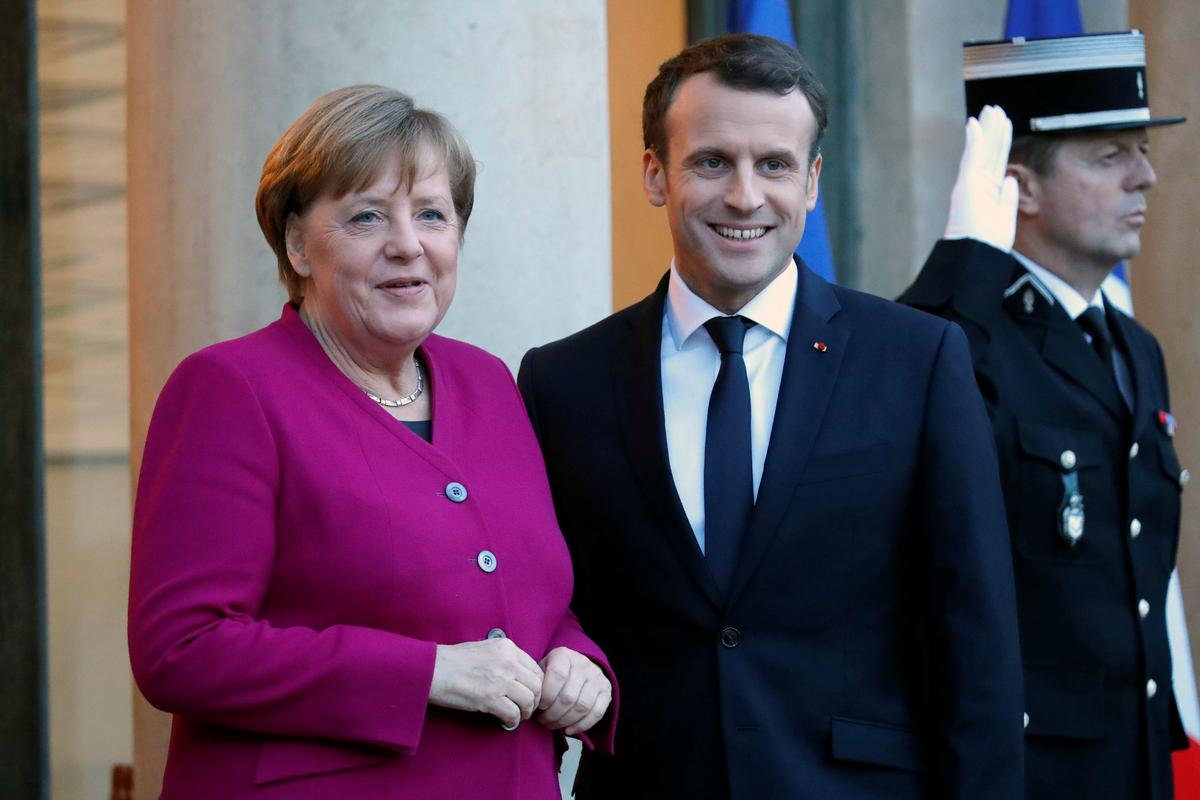 PARIS (Reuters) – German Chancellor Angela Merkel said on Friday she was optimistic that Social Democrats (SPD) would approve the start of formal coalition talks with her conservatives at a special party congress this weekend.

Delegates from the SPD vote on Sunday on whether their leaders should push ahead with negotiations on renewing an alliance with the conservatives that has ruled Germany since 2013 after striking a preliminary deal last week.

“I hope that after we had such intensive exploratory talks that the SPD party congress greenlights coalition talks,” said Merkel, speaking at news conference with French President Emmanuel Macron. “I am optimistic.”

A negative vote would prolong political deadlock in Europe’s largest economy, which has been without a government since a September election that weakened both political blocs.

It also has the potential to derail Macron’s ambitious reform agenda for the euro zone.

Macron and Italian Prime Minister Paolo Gentiloni on Friday both urged the SPD to approve further talks on a coalition government, underscoring growing anxiety about the impasse.

“This is the moment for progressive forces to affect the fate of Europe,” Gentiloni wrote in a column to be published Saturday by the German media group RND. “The contribution of socialist and democratic forces is essential to that.”

But former finance minister Wolfgang Schaeuble, a Merkel ally, ruled out a crisis if the chancellor failed to pull off a deal with the SPD.

“If it works, this is good,” Schaeuble, who gave up his finance portfolio to become president of the Bundestag lower house after an election last year, told Focus Magazine.

“If it doesn’t work, it is also no catastrophe. There are other ways it could work,” he added without specifying a way out of a deadlock ensuing from failure to seal a coalition deal.

SPD leader Martin Schulz and other top SPD members on Friday urged members to endorse coalition talks with Merkel or risk facing new elections that could further damage the party.

Opponents of the talks within the SPD, especially members of the party’s youth and left wings, are campaigning actively against further talks.

Getting their way could lead to new elections or a minority government for the first time in Germany’s post-war era.

Many experts fear that new elections could further strengthen the anti-immigrant, far-right Alternative for Germany (AfD), which entered parliament for the first time in September.

Rejection of the talks “would lead to new elections, and in pretty short order”, Schulz told weekly news magazine Der Spiegel. He said the SPD — which posted its worst result since 1933 in the election — was likely to see further losses.

“If the parties do not succeed in forming a government with the majorities in the Bundestag, then voters will punish them,” he told the magazine.

The leader of the SPD’s youth wing, Kevin Kuehnert, and other opponents of another coalition government, say a preliminary deal hammered out with conservatives falls too far short of SPD goals.

Schulz and his backers insist the blueprint will benefit German citizens, and dampened hopes that formal coalition talks would result in significantly different results for the SPD.

“The exploratory talks created a framework for what is possible and what isn‘t,” he said. “After all, we don’t want the other side to question things that we fought for and won.”

A new poll by broadcaster ZDF showed that 64 percent of Germans — and 75 percent of SPD members — expect SPD delegates to approve further talks with the conservatives.

The SPD has vowed to ballot all of its 443,000 members on any final coalition deal with Merkel’s Christian Democrats (CDU) and their Christian Social Union (CSU) Bavarian allies.

Conservatives would win 33 percent if the next election were held on Sunday, the poll showed, up one percentage point from a poll last week. The SPD would win just 20 percent of the vote, down three points from last week.