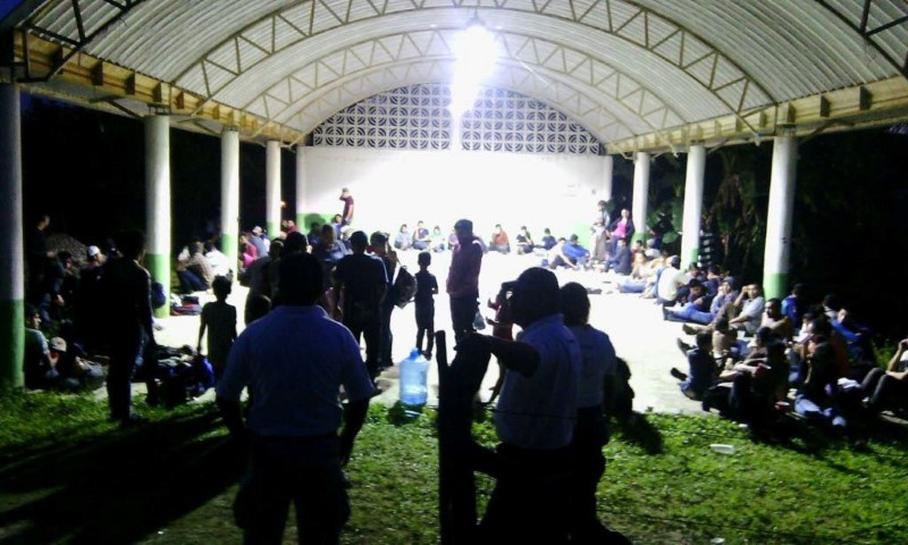 MEXICO CITY (Reuters) – Mexican authorities said on Sunday they rescued 147 Central Americans abandoned in the wilderness of Veracruz state after suspected human smugglers forced them out of the cramped tractor trailer they were traveling in on their way to the United States.

The migrants, 74 from Honduras, 59 from Guatemala, 13 from El Salvador and one from Nicaragua were in the back of the poorly ventilated vehicle as they traveled to the border state of Tamaulipas, where they would eventually be smuggled into the United States, Mexico’s national immigration institute said.

Among those rescued were 48 minors, including 14 traveling without an adult companion.

They were abandoned near a highway in the city of Ozuluama, Veracruz.

Central Americans are seen in the town of Tantima, Mexico, after Mexican authorities said that they rescued 147 Central Americans abandoned in the wilderness of Veracruz state after alleged human smugglers forced them off the cramped tractor trailer they were traveling in on their way to the United States, in this handout photograph released by Mexican National Institute of Migration on July 30, 2017. National Institute of Migration/Handout via REUTERS.

Earlier this month, 10 people died and 29 were hospitalized after more than 100 illegal immigrants were packed into a stifling tractor trailer for a 150-mile (240-km) drive from the U.S.-Mexico border to San Antonio, where survivors spilled out into a Walmart parking lot in the Texas city.

“According to the testimony of migrants, the alleged traffickers, who used the Veracruz-Tampico route, in order to reach the United States, abandoned the migrants in the wilderness, where they were forced to hide in the bushes” without food or water, the immigration institute said.

Personnel from the immigration institute gave medical attention, food and water to the rescued Central Americans and contacted their respective embassies.

Plagued by gang violence and poverty, the trio of Central American nations, Guatemala, Honduras and El Salvador, together send the bulk of migrants entering the United States illegally.

Turf wars between gangs have sparked a surge in violence in Mexico in the past 18 months, also raising the incentive for some young Mexicans to risk the crossing.