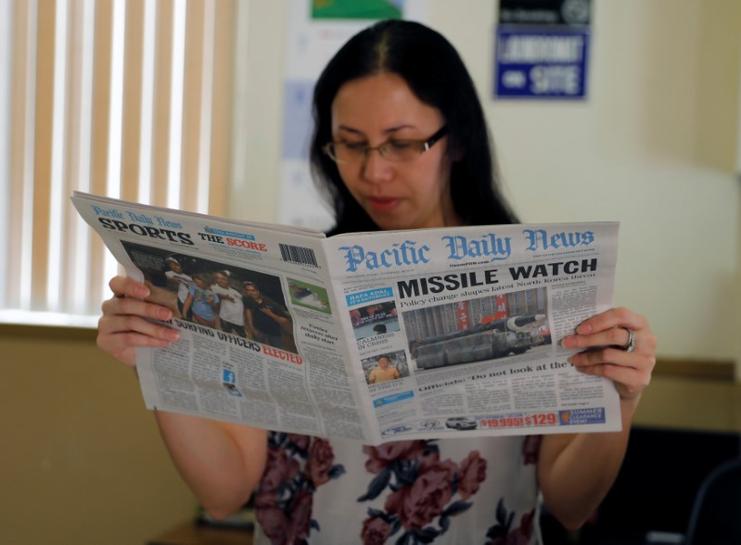 GUAM (Reuters) – Fourteen minutes is not long to prepare for a potential catastrophe. That’s the estimated time taken from a launch of a mid-range ballistic missile in North Korea until impact on Guam, where residents seem resigned to the belief that their fate is out of their control.

The local government of this tiny U.S. Pacific island issued preparation guidance to its 163,000 people on Friday on how best to hide and deal with radiation after threats by Pyongyang to strike Guam, or test its missiles in its surrounding waters.

But islanders don’t seem in a hurry to get ready.

Mike Benavente, 37, who maintains air conditioners, said he saw the advisory on Facebook, but preferred family time at a beach barbecue to stocking up on supplies and thinking about suitable shelter options.

“Preparation for attack? I’m doing it!” he said, pointing to a grill he was readying for burgers and hot dogs. “If we have a big missile coming here, everyone’s gonna die. How can I prepare for a missile?”

In a guidance note titled “Preparing for an Imminent Missile Threat”, Guam Homeland Security advised seeking out in advance windowless shelters in homes, schools and offices, with concrete “dense enough to absorb radiation”.

It said if an attack warning came, residents should seek shelter and stay there for at least 24 hours. Those caught outside should lay down, cover their heads and “not look at the flash or fireball” to avoid going blind.

Plush hotels along Guam’s Tumon beach didn’t seem in a rush to prepare either. Staff at several hotels and resorts said they knew guidelines had been issued but already had procedures in place for emergencies.

“We have an evacuation plan for typhoon, tsunami, terrorism, but we don’t have anything for a North Korean missile attack,” said a supervisor at one resort, who asked that neither he nor his hotel be identified because he wasn’t authorized to speak to the media.

A manager at a hotel nearby had a printed copy of the guidelines, but said there was no instruction yet to distribute it to guests.

A local resident working as a lifeguard on a beach poses in the Tumon tourist district on the island of Guam, a U.S. Pacific Territory, August 12, 2017.Erik De Castro

North Korea on Thursday said plans would be completed by mid-August to fire four intermediate-range missiles to land near Guam, some 3,500 kilometers (2,175 miles) away, after U.S. President Donald Trump said any threat would be “met with fire and fury like the world has never seen.”

Guam, an island half the size of Hong Kong and some 7,000 km from the U.S. mainland, is a target because of its naval base and air force base, from which two B-1B supersonic bombers were deployed close to the Korean peninsula on Tuesday.

It is also a permanent home to a Terminal High Altitude Area Defense (THAAD) interceptor.

Local authorities have been reassuring residents and tourists that a “strategic defense umbrella” across the Western Pacific can counter any missile attacks, and the chance of a successful North Korean strike on Guam was minimal.

“The threat level has not changed. It’s business as usual.”

That was the case on Saturday in Guam’s malls and along its pristine beaches, where children played in the turquoise sea as parents drank beer and prepared picnics.

“I haven’t really thought about preparation. We really don’t know what to do if there’s a missile attack,” said Marlene, 37, an accountant.

“We get just 14 minutes. The military says they’ll be ready, so we’re banking on them.”

“By the time we hear about it, it’ll be too late and there’s no room for us ordinary Joes in the bomb shelters. We’re dead meat,” he said.