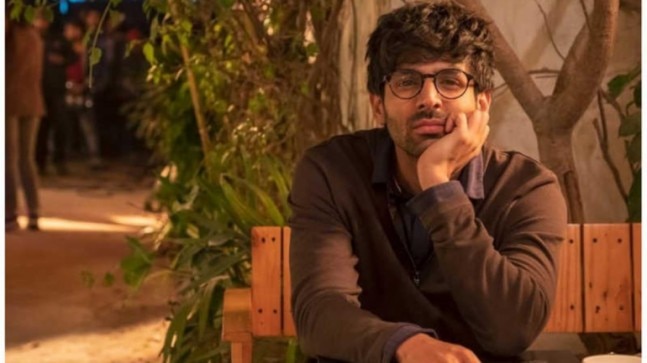 Think Kartik Aaryan and you will think of films like Sonu Ke Titu Ki Sweety, Luka Chuppi or Pati Patni Aur Woh. Of course, that’s keeping the Punchnamas aside. And then there’s the most recent, the Imtiaz Ali-directed, Love Aaj Kal. Think deeply and you will spot a pattern in all his films, the lack of which may result in a flop, too. (Ahem, Love Aaj Kal.) Now, not that you will find all three in one, but a combination of at least two will certainly be found.

In this week’s Monday Masala, we help you spot a Kartik Aaryan film from a mile away, thus offering you a chance to escape it. Here goes nothing:

In 2015, Kartik Aaryan received the Best Actor in a Comic Role award for Pyaar Ka Punchnama 2, awarded by one of the biggest film magazines of India (no, not that one, the other one). The one thing that qualified him for the award was his monologue. Now, he had one in the first Pyaar Ka Punchnama (2011) too, but it was the 2015 one that got him more attention. Kartik, of course, has an aversion to this word. So, even if we don’t call it a monologue and reduce it to a rant, let’s not deny that he has one, or multiple short ones in (almost) all his films. Like the rape rant in Pati Patni Aur Woh that was supposed to be censored but received an apology of an alteration.

A monologue is a literary device, a combination of two Greek words, ‘solitary’ and ‘speech’, that has one actor deliver a solo speech, expressing his feelings. Except, in Kartik’s case, the feelings are utterly misogynistic. And that brings us to our second point.

The sneaky thing about misogyny is that the ones propagating it never see it. Which is why Katrik was thankful in a 2015-interview that “people haven’t yet called Pyaar Ka Punchnama 2 misogynistic.“

Wait, what? This, despite Twitter going crazy over all the women-hating dialogues in both the Punchnamas, that eventually peaked in Sonu Ke Titu… (the unofficial Punchnama 3). But, as Kartik said in the same interview, “Hazaar logon mein se sab ko aap khush nahi kar sakte ho.”

Kartik Tiwari aka Kartik Aaryan has epitomised the boy-next-door trope. Almost all his characters are creepy stalker-like persons you will find in most Indian neighbourhoods (PS. Perhaps far too many if you’re in Noida). His against-the-gravity hairstyle adds little to make his personality pleasing. Almost a decade in the industry; Kartik has never experimented with his looks as an actor save for donning a moustache in a one-off film. And Kartik has the perfect explanation for that too, when he says in an older interview, “I’d want to cater more to what people expect from me. Why would I want to spoil my career by doing something the audience won’t accept me as?”

Now, you may look at it as a smart move by a self-aware man in the business of cinema, or as feeding a stereotype he sticks to like a comfort zone, but also questions as and when required for headline-making purposes, only to coil back into it.

So with all fluff and no substance, what makes Kartik Aaryan tick?

His insane social media followership, falling in the Gen Z age-group, who regularly park themselves outside his Bandra home, proclaiming their love and proposing marriage to him.

Why did they fall for him so hopelessly? Because of what Sara Ali Khan said on that now-viral episode of Koffee With Karan, “I quite like him.”

A generation decided that if Sara, that smart, funny, quirky firebrand of a woman likes him, he must be good. Sara created a narrative about Kartik, and (most of) the rest of the country believed it like blind bats, no questions asked.

When Imtiaz Ali said he was making a film about love aaj-kal, as in love in 2020, we hoped it would have something about this kind of blind followership that makes heartthrobs out of the Kartiks of your neighbourhood, your class. But, he too fed us the narrative. Alas.

ALSO READ | Kartik Aaryan’s fan goes down on one knee. Has Sara Ali Khan seen it?