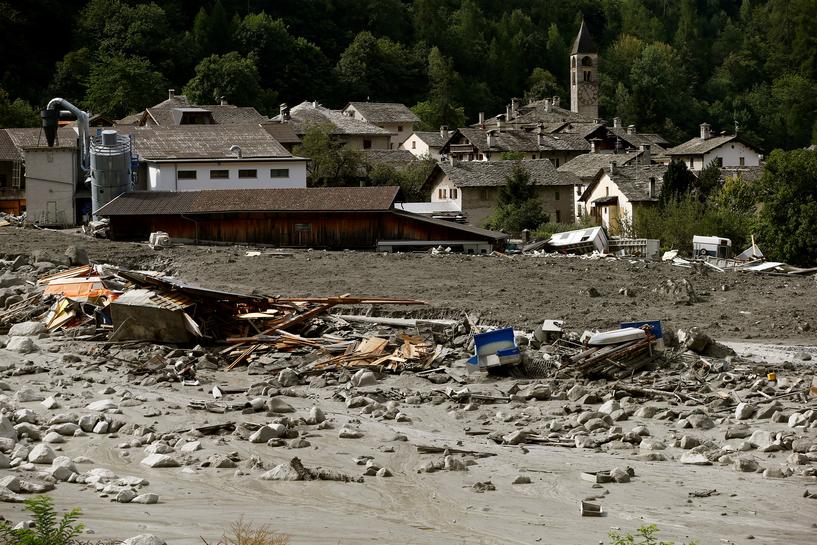 ZURICH (Reuters) – Swiss police said on Saturday they were expecting more landslides in the remote valley near the Italian border where eight people went missing in a massive rock fall this week.

Rescuers suspended a search for the missing hikers from Germany, Austria and Switzerland on Friday as second landslide sent a wall of mud through the village of Bondo.

The tiny settlement was already partially destroyed after the side of a mountain collapsed on Wednesday, dumping rock, rubble and mud metres high.

A geologist flew over the site in a helicopter early on Saturday to inspect the 3,369-meter (11,053 ft) Piz Cengalo mountain in the canton of Grisons to assess whether another slide is imminent.

“We are expecting more rock slides and mud slides in the affected area,” Grisons police said.

Evidence that the hikers had been in the valley at the time of the slide was growing “more concrete” the force added.

Experts have said melting permafrost due to high temperatures was likely only a minor factor behind the disaster, with longer-term changes in Piz Cengalo’s structure, water content and pressure over the last thousand years playing a larger role.

“The number (of landslides in Switzerland) have stayed roughly the same in the past few years because we’ve had several years of very hot periods in the summer,” Michelle Phillips, group leader for snow and permafrost at the Swiss Federal Institute for Forest, Snow and Landscape Research (WSL).

“These tend to trigger smaller events, less than 100,000 cubic metres.”

Larger events – like this week’s cataclysmic slide that sent more than 4 million cubic meters (141 million cubic feet) of boulders and mud crashing into the valley – are not likely to increase significantly, she said on Friday.

Reporting by John Miller in Zurich and Arnd Wiegmann in Bondo; Editing by Andrew Heavens