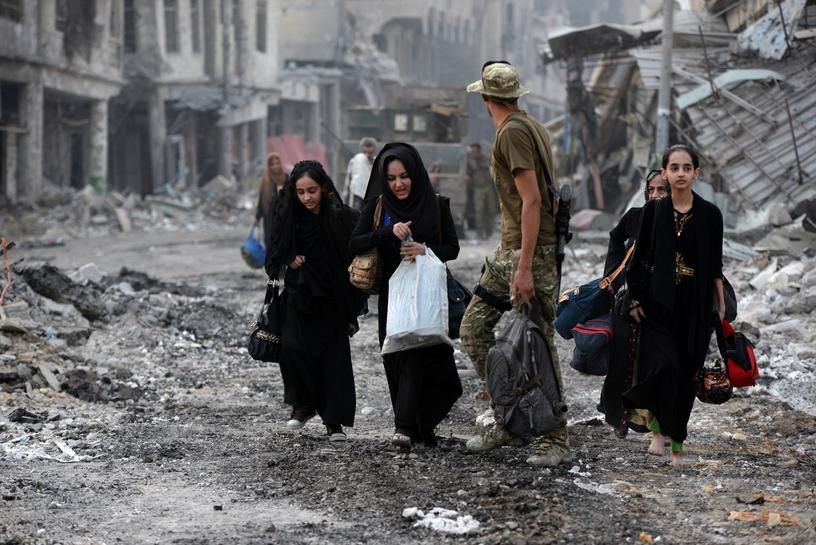 GENEVA The population of Mosul has endured huge suffering in the war to take the northern Iraqi city back from Islamic State and trauma cases among civilians are sharply rising in the last stages of battle, Doctors without Borders (MSF) said on Wednesday.

Tens of thousands of civilians remain trapped among the shattered buildings and infrastructure in Islamic State’s redoubt in the Old City by the western bank of the Tigris river, the aid organization said.

Civilians who have managed to get medical treatment are suffering from burns, and shrapnel and blast injuries, while many women and children are in need of critical care and are under-nourished, a MSF officials said.

But there was concern that only a small proportion of the civilian population were managing to get the medical attention they required.

“Really, (there is) a huge level of human suffering,” Jonathan Henry, MSF emergency coordinator in West Mosul, told a news briefing in Geneva after spending six weeks in Iraq.

“This is a massive population that has been traumatized from a very brutal and horrific conflict,” he said.

Iraqi commanders have predicted final victory in Mosul this week after a grinding eight-month assault on the once two-million-strong city which has pushed Islamic State into a rectangle no more than 300 by 500 meters beside the Tigris.

The militants’ brutality and the U.S.-backed war to end their three-year rule has created an “extremely traumatic environment for people to flee from and to return to,” affecting their mental health on a large scale, Henry said.

“The west (of the city) has been heavily destroyed. It’s really mass destruction … similar to the blitz of the Second World War, hospitals have been destroyed, neighborhoods are in ruins.”

The battles in the Old City’s maze of narrow alleyways is fought house-by-house in streets packed with civilians and planted with multiple explosive devices by the militants, who are also using drones and suicide bombings.

Schrapnel and blast injuries, broken bones from collapsed buildings and burns are the main type of wounds seen by the MSF team of surgeons in west Mosul, said Henry.

“One of our major concerns is we feel only a small percentage of the patients are reaching medical facilities,” he said.

Half of the 100 war-wounded over the past two weeks at the MSF 25-bed hospital were women and children in need of critical care and many were malnourished, he said.

“But the most urgent patients we feel are not able to leave the conflict area.”

About 900,000 people, nearly half the pre-war population of Mosul, have been displaced by the fighting, taking shelter in camps or with relatives and friends, according the aid group.

Chinese Political Prisoner Dies Amid Suspicion of Torture, Mistreatment
Vietnamese Police Release Ethnic Cham After Four-Day Interrogation
Commentary: How China will try to subdue Taiwan – without firing a bullet
Taliban not ready to meet Afghan government in Turkey as US wants
Beijing’s top official in Hong Kong warns foreign powers not to interfere