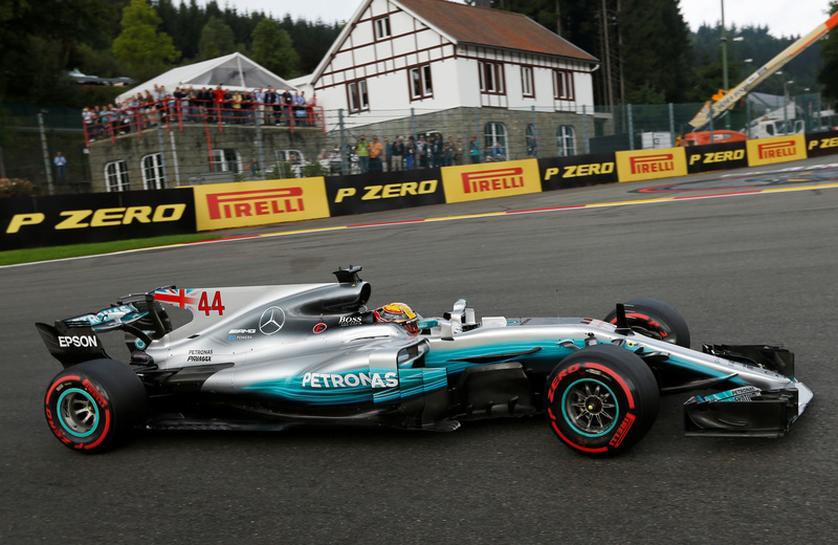 The Mercedes driver, who will be starting his 200th race on Sunday, was fastest in every phase of the hour-long session to take pole with a time of one minute 42.553 seconds, a track record.

Ferrari’s championship leader Sebastian Vettel, who is 14 points ahead of the Briton with nine races remaining, joined his title rival on the front row after pulling out a late flying lap of 1:42.795.

Finland’s Valtteri Bottas qualified third for Mercedes with Ferrari’s Kimi Raikkonen, a four-times winner in Belgium who helped Vettel by giving him an aerodynamic ‘tow’ when it mattered, taking the fourth slot.

Schumacher, whose 91 race wins and seven championships will still take some beating, set his pole record at Magny-Cours in France in July 2006.

The German has not been seen in public since he suffered severe head injuries in a skiing accident in France in 2013 but a message from the family was delivered to Hamilton by former Ferrari technical head Ross Brawn.

“They want to congratulate you on equaling Michael’s record and, as Michael always said, records are there to be beaten,” said Brawn, former Mercedes principal and now a managing director for Formula One.

Hamilton was clearly moved by both his achievement and the message.

“I think and pray for Michael all the time. I’ve had the privilege of racing with him and always admired him and still do,” he told the crowd.

“I’m just honored to be up there with him now in the poles but he will still be one of the greatest of all time.”

Hamilton took over from Schumacher, who had retired from Ferrari in 2006 but returned with Mercedes in 2010, after joining from McLaren in 2013.

“To be up here ahead of the Ferrari is an amazing feeling. This is one of my favorite circuits so to come here and put a lap together like that is a dream,” he said.

Dutch 19-year-old Max Verstappen, who started on the front row last season, will start fifth for Red Bull in front of an army of orange-shirted fans making the short trip across the border.

His Australian team mate Daniel Ricciardo was sixth, ahead of Renault’s Nico Hulkenberg whose team mate Jolyon Palmer was faster until a gearbox problem sidelined him in the final session.

Belgian driver Stoffel Vandoorne will start his first home grand prix in last place after qualifying 15th for McLaren but with a 65-place grid penalty.