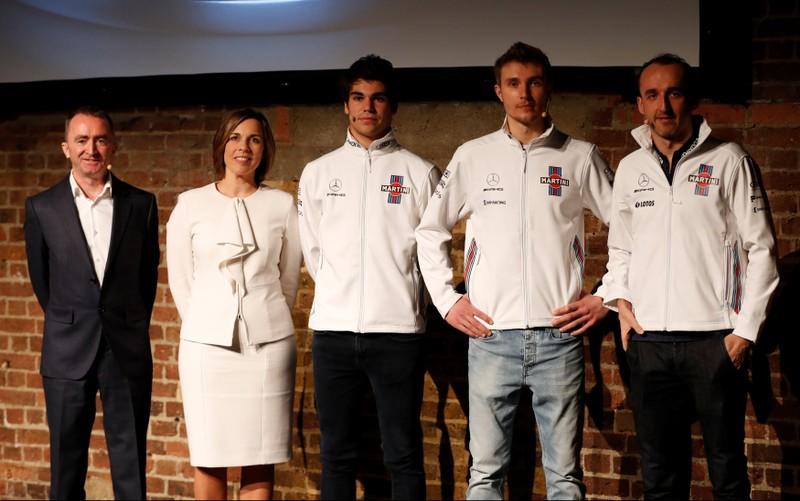 LONDON (Reuters) – Williams showed off their 2018 Formula One car on Thursday, with technical head Paddy Lowe signaling a change of direction as the former world champions seek to get back among the frontrunners.

Images of the Mercedes-powered FW41 were shown on a big screen at a launch in London, without the car being physically present. Those who had hoped to see it in the flesh will have to wait until testing in Barcelona on Feb. 26.

The car is the first under Lowe’s guidance, with the Briton joining from dominant Mercedes last March with plenty of expectation.

The British-based team have also recruited former Ferrari chief aerodynamicist Dirk de Beer, who started at much the same time as Lowe.

“The car has many new features, most of which are not all that obvious, but externally the team has pursued a very different aerodynamic concept which has allowed us some significant progress in aerodynamic performance,” said Lowe.

“All Formula One cars are an evolution of what has gone before to some extent, but the FW41 does involve a number of departures from the directions that have been pursued in the past.”

Lowe said there had also been some “radical changes” to the car’s packaging to incorporate developments from Mercedes.

Williams, fifth for the past two seasons after finishing third in 2015, could have a tough year ahead with the youngest lineup on the starting grid in Canadian teenager Lance Stroll and Russian Sergey Sirotkin.

The gulf between Williams and fourth-placed Force India, who have the same Mercedes engines and operate on a similar budget, ballooned to 104 points least year from 35 a season earlier.

McLaren, now with Renault engines after ditching Honda following three dismal seasons together, and Renault’s own works team are also expected to be breathing down their necks.

Williams were, however, the only team outside Mercedes, Ferrari and Red Bull to finish on the podium last season thanks to Stroll’s third place in Azerbaijan.

The Canadian, now 19, was the youngest rookie podium finisher in the sport’s history and also the youngest front row starter.

“I am a different person to where I was last year,” said Stroll. “I learned from the tough times… and I enjoyed the good times.”

Poland’s Robert Kubica, who had been hoping to return to the starting grid for the first time since a 2011 rally accident partly severed his right arm, will be the team’s reserve and development driver.

The season starts in Australia on March 25.