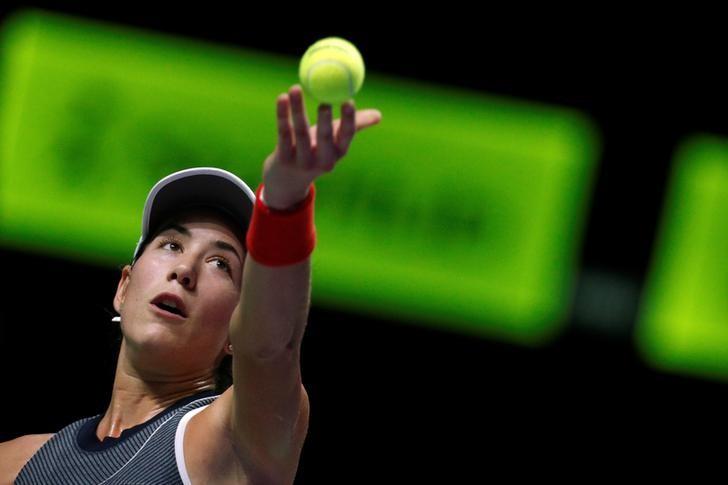 (Reuters) – World number two Garbine Muguruza’s wretched run of injury retirements at the Brisbane International extended to a fourth consecutive year on Tuesday when the Spaniard succumbed to leg cramps in the third set of her opening match.

The top seed started well in her second round encounter against unseeded Serbian Aleksandra Krunic, converting her seventh set point in a marathon 12th game to claim the opener before roaring to a 5-2 lead in the second.

The reigning Wimbledon champion was coasting but the 53rd-ranked Krunic mounted a stirring fight back and reeled off four of the next five games to force a tiebreak, which she claimed by a 7-3 margin to send the contest into a deciding set.

However, Mugurza broke the Serb in the first game of the third and was serving at 2-1 up before she collapsed on the baseline and retired immediately when she was helped off the court to receive treatment for cramping in both legs.

The early exit cost Muguruza a chance to replace Romania’s Simona Halep at the top of the world rankings ahead of the Australian Open later this month but the Spaniard’s immediate concern will be to get fit for the first grand slam of the year.

Muguruza’s run of injury woes in the tournament dates back to 2015 when she withdrew on the eve of the event with an ankle problem, before a left foot injury ended her 2016 campaign and a right thigh problem led to her semi-final retirement last year.

“I‘m not happy with what happened today and I want to wish Garbine a fast recovery. I hope she gets better for the slam,” Krunic, who advanced to the quarter-finals, said in a courtside interview.

Writing by John O’Brien in Singapore; Editing by Greg Stutchbury