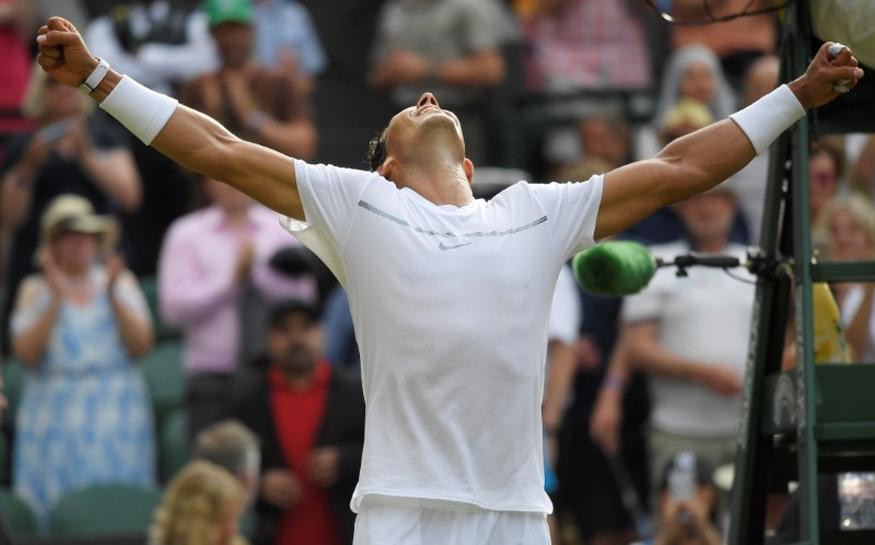 LONDON A ominous-looking Rafa Nadal kept up his bid for a third Wimbledon and French Open double in style on Friday, serving notice he is not be to messed with in his 6-1 6-4 7-6(3) defeat of big-serving Karen Khachanov to reach the last 16.

The Spanish fourth seed scorched his way through the first set, threatening to sizzle the parched Centre Court grass with the pace of some of his shots.

He committed only four unforced errors in that set and visibly berated himself when he dropped even a point.

The 30th-seeded Russian regrouped in the second set and even had a set point in the third but, under pressure from a barnstorming Nadal, he racked up a total of 35 unforced errors as he overcooked some of his points.

“I think for a while, I played fantastic. The first set and a half I think was a great, great level. I am very happy with the way I played,” Nadal said as he came off court.

Nadal, 31, won this year’s French Open, his 10th title there, without dropping a set and has kept up the pace at Wimbledon as he aims to covert that red-hot clay form to claim his first grasscourt slam title since 2010.

With Friday’s win, he has now bagged 28 consecutive sets at the grand slams this year — laying down a marker to his rivals in his quest for a 16th major title.

He faces a grasscourt specialist in Luxembourg’s Gilles Muller, seeded 16, in the fourth round.

“I need to be very aggressive and very fast with my legs. And very focused all the time,” said Nadal as he looked ahead to his next match.

Hong Kong fines Goldman Sachs record US$350 million over 1MDB failings
Student group calls on NUS to show ‘transparency and accountability’ in handling case of professor sacked for inappropriate behaviour
Commentary: My walk around Singapore was a step outside my comfort zone – and I’m all the better for it
Electronics sector continues to grow despite COVID-19, offered more than 2,800 opportunities since April: MOM
Commentary: Bollywood actor Sushant Singh’s death has gripped India and its politics