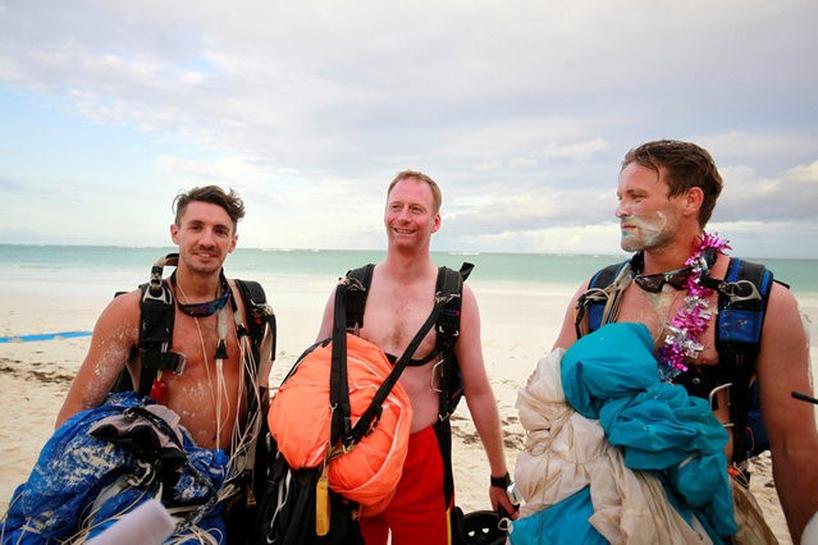 NAIROBI As gloomy headlines multiplied in the wake of last year’s Brexit vote, four Britons decided to cheer up their divided country by setting a new world record for skydiving. Naked.

Pete Sharwood-Smith, Gary Lincoln-Hope, Pete Cheek and Olly Aylott jumped from a plane 22,400 feet above a Kenyan beach on Thursday, aiming for the world record for the highest naked jump and appealing for unity after the bruising referendum campaign.

“We’re not allied to any political party, we just want to reinforce the positive aspects of being British and British people are known for doing silly things, especially after the pub,” said 43-year-old Sharwood-Smith, a red-haired Scot.

Britons voted to leave the European Union on June 23, 2016. Planning for the jump began about six months ago.

The Guinness Book of World Records said naked skydiving was not a category it monitored, but Jeff Dawson, who founded the U.S.-based Society for the Advancement of Naked Skydiving, said the highest naked jump he knew of was 18,000 feet.

Cheek, a 39-year-old web designer and photographer from London, said he also jumped to celebrate his father Pat Cheek, who often did gardening or construction work naked before he died of cancer 10 years ago.

“He always said, ‘do dangerous things carefully,'” said Cheek. “Kenya is a beautiful country and I thought some high-speed nudity would only add to the experience.”

Lincoln-Hope, who served in the elite British Parachute Regiment, is the only member of the team to have jumped naked before, hoping then to break the record for the largest number of people parachuting without clothes. At 16, they fell short, and he broke his foot.

“The jump was colder than I was hoping. Everything was very numb,” he said. Air temperature was around -18 degrees Celsius (-4°F) with 125 mile per hour wind chill factor.

After removing oxygen masks and jumping from the plane, the four had five minutes to get to 15,000 feet, where normal oxygen levels resumed, or their ability to think clearly would be affected, Lincoln-Hope said.

Maths teacher Olly Aylott, 33, joined the record attempt at the last minute after meeting the other three on the beach by chance on Wednesday.

“British people are known for being quite prudish but we’re not really,” he said.

A crew met the four on the beach with wraps.