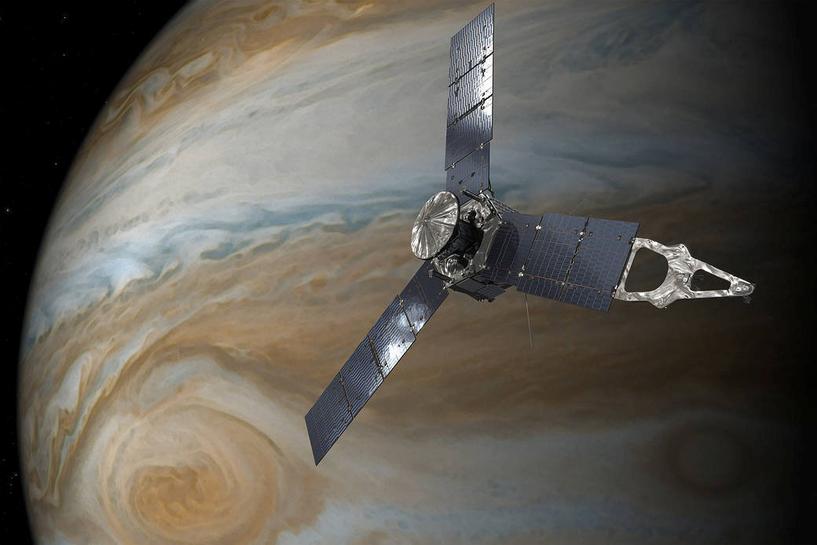 LOS ANGELES (Reuters) – A NASA spacecraft in orbit around Jupiter began transmitting data and images on Tuesday from humanity’s closest brush with the Great Red Spot, a flyby of the colossal, crimson storm that has fascinated Earthbound observers for hundreds of years.

The Juno probe logged its close encounter with Jupiter’s most distinctive feature on Monday evening Pacific time as it passed about 5,600 miles (9,000 kilometers) above the clouds of the mammoth cyclone.

But it will take days for readings captured by Juno’s array of cameras and other instruments to be delivered to scientists at the Jet Propulsion Laboratory (JPL) in Pasadena, California, and much longer still for the data to be analyzed.

Scientists hope the exercise will help unlock such mysteries as what forces are driving the storm, how long it has existed, how deeply it penetrates the planet’s lower atmosphere and why it appears to be gradually dissipating.

Astronomers also believe a greater understanding of the Great Red Spot may yield clues to the structure, mechanics and formation of Jupiter as a whole.

“This is a storm bigger than the entire Earth. It’s been there for hundreds of years. We want to know what makes it tick,” said Steve Levin, the lead project scientist for the Juno mission at JPL.

Levin said the storm is believed to be powered by energy oozing from Jupiter’s interior combined with rotation of the planet, but the precise inner workings are unknown.

Some of the most valuable data from Monday’s flyby is expected to come from an instrument designed to peer into the red spot at six different depths, Levin said.

The churning cyclone ranks as the largest known storm in the solar system, measuring about 10,000 miles (16,000 km) in diameter with winds clocked at hundreds of miles (km) an hour around its outer edges. It appears as a deep, red orb surrounded by layers of pale yellow, orange and white.

The red spot has been continuously monitored from Earth since about 1830, though observations believed to have been of the same feature date back more than 350 years.

Once wide enough to swallow three Earth-sized planets, the famed Jovian weather system has been shrinking for the past 100 years and may eventually disappear altogether.

Still, the spot remains the most prominent characteristic of the solar system’s largest planet, a gargantuan ball of gas — mostly hydrogen and helium — 11 times the diameter of Earth with more than twice as much mass as all the other planets combined.

Monday’s encounter with the Great Red Spot was the latest of 12 flyby missions currently scheduled by NASA for Juno, which is to make its next close approach to Jupiter’s cloud tops on Sept. 1.