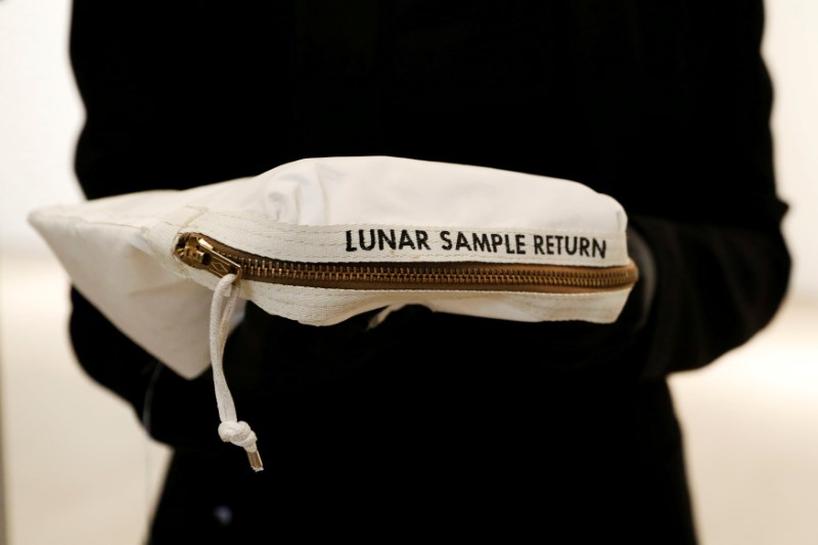 NEW YORK (Reuters) – A bag used by U.S. astronaut Neil Armstrong to bring the first samples of moon dust back to Earth was sold to an anonymous bidder for $1.8 million at an auction in New York on Thursday marking the 48th anniversary of the first moon landing.

The bag, which for years sat unidentified in a box at the Johnson Space Center in Houston, was bought by a person who bid by telephone and did not wish to be named publicly, auctioneer Sotheby’s said.

Auctioneers had expected the bag to fetch between $2 million and $4 million.

It was the highest-value item at an auction of moon memorabilia that included the Apollo 13 flight plan annotated by its crew, which sold for $275,000; a spacesuit worn by U.S. astronaut Gus Grissom, which sold for $43,750, and a famous image of Buzz Aldrin of Apollo 11 on the moon taken by Neil Armstrong, which went for $35,000.

After Armstrong and his Apollo 11 crew came come in July of 1969, the fate of the 12-inch by 8.5-inch (30-cm by 22-cm) bag labeled “Lunar Sample Return, was unknown for decades. After disappearing from the Johnson center, it surfaced in the garage of the manager of a Kansas museum, Max Ary, who was convicted of its theft in 2014, according to court records.

The bag was seized by the U.S. Marshals Service which put it up for auction three times, drawing no bids, until it was bought in 2015 for $995 by a Chicago-area attorney, Nancy Lee Carlson.

She sent the bag to NASA for authentication, and when tests revealed it was used by Armstrong and still had moon dust traces inside, the U.S. space agency decided to keep it.

Carlson successfully sued NASA to get the bag back, and the attention created by her legal challenge prompted many inquiries from potential buyers, according to Sotheby’s. That led Carlson to decide to auction it again.

One group criticized the decision to sell a piece of space history.

“The bag belongs in a museum, so the entire world can share in and celebrate the universal human achievement it represents,” said Michelle Hanlon cofounder of For All Moonkind, a non-profit formed to persuade the United Nations to adopt measures to preserve and protect the six Apollo lunar landing sites.