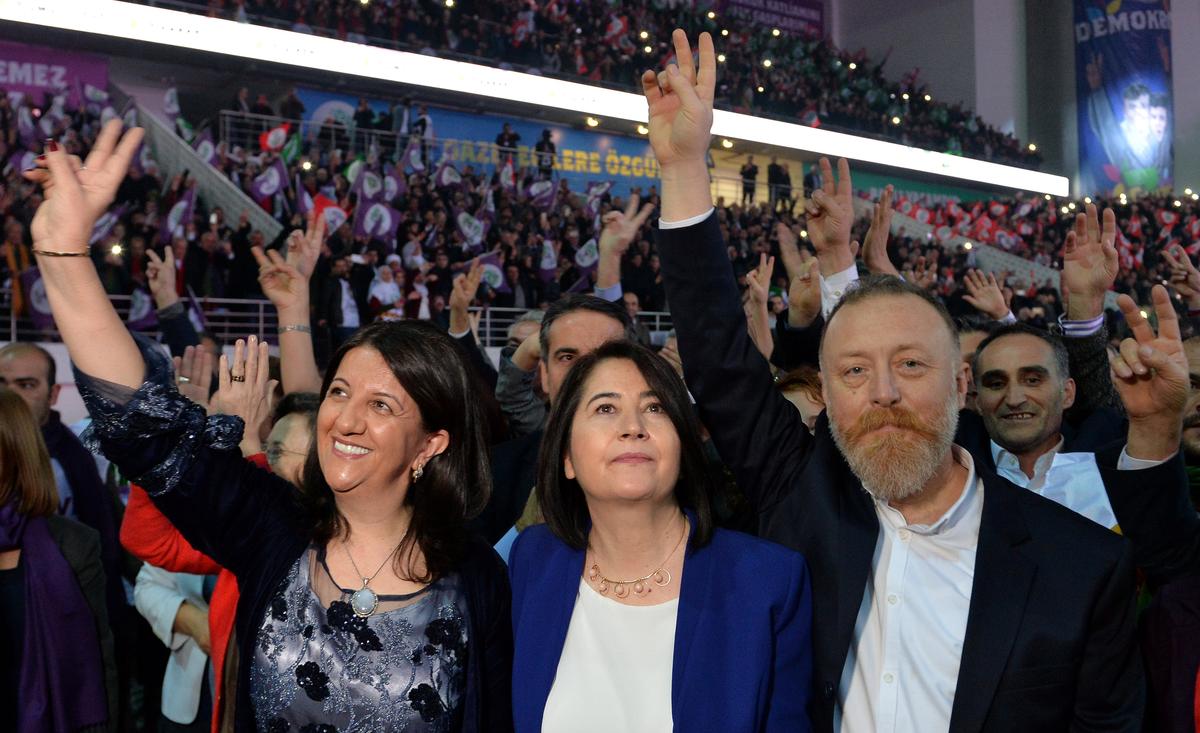 ANKARA (Reuters) – Turkey should accept the territorial gains of Syrian Kurdish forces at its southern border, end its military operation against them and instead resolve problems through dialogue, the new leader of Turkey’s main pro-Kurdish party said.

Buldan, elected on Sunday as the new co-leader of the Peoples’ Democratic Party (HDP), is already being investigated for terrorism for making critical remarks of the Syria incursion. Since the operation began, authorities have detained more than 600 people for protesting or criticizing it on social media.

Critics say the moves are emblematic of a wider crackdown launched after a 2016 failed putsch against Erdogan’s government. More than 50,000 people have been detained, including the previous leaders of the HDP.

“The reasonable thing to do is to find a solution through dialogue, and the only possible solution is through agreement. Turkey needs to tolerate the achievements of Kurds in Syria,” she told Reuters in an interview late on Tuesday.

Since the onset of Syria’s civil war in 2011, the YPG and its allies have seized swathes of land and set up autonomous cantons in northern Syria, including Afrin.

Ankara considers the YPG a terrorist group and an extension of the outlawed Kurdistan Workers Party (PKK). Erdogan has been infuriated by U.S. support for the YPG against Islamic State.

Ankara also accuses Buldan’s party of links to the PKK, which has waged a deadly insurgency in Turkey’s largely Kurdish southeast for three decades. The HDP, parliament’s second-largest opposition party, denies this.

The investigation against Buldan was launched a day after she was elected, with a prosecutor citing her comments against the offensive in Syria, which she has described as an attack on civilian Kurds.

Ankara says it is not targeting Kurdish civilians in its ground and air operation. In the three weeks since it was launched, there have been conflicting reports of its course, including the number of casualties suffered from both sides.

Buldan stood by her allegation that the operation was targeting Kurdish civilians.

“The government is acting against Kurds, not only in Turkey but wherever they are. Turkey’s intervention against Kurds living in peace (in Syria) with other ethnic groups is unacceptable,” Buldan said.

Buldan said she wants to revive a peace process that collapsed three years ago, what she calls “a turning point for Turkey”.

Erdogan’s government had launched talks with militant leader Abdullah Ocalan, who remains in jail on an island near Istanbul, in 2012. The peace talks broke off in 2015, when a ceasefire between the militants and the government also broke down.

“During three years of negotiations, the country lived in peace and hope. The achievements of the peace process had given Turkey hope, and we need to show that promise again. Our sole aim will be to stop the deaths,” she said.

But a return to peace negotiations seems unlikely now, given that Erdogan has promised to crush the PKK and the YPG in Syria. He has also adopted a much more nationalist tone since the peace process collapsed, winning support from the nationalist opposition, which is opposed to any settlement with Kurds.

Buldan’s husband was murdered in 1994, after the government said it had a list of businesspeople who were funding the PKK. The killer was never identified. She campaigned against extrajudicial killings for years and entered into politics from the Kurdish movement in 1999.

“My political identity aside, I have personally fought for the killings and pain to stop. No mother should be given their sons or husbands in a coffin. This is equally important for both sides and there’s no difference between the coffins from Turkey’s southeast or west for us,” she said.