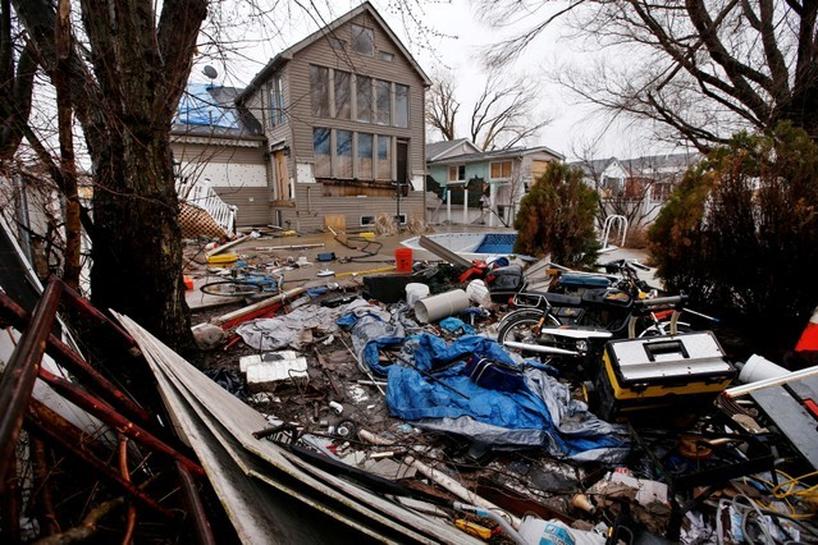 NEW YORK (Reuters) – Every now and then, Frank and Mary Lettieri come back to visit what used to be their tightly packed Staten Island neighborhood before Superstorm Sandy prompted New York state to let it go back to nature.

The deadly storm, which swamped the New York metropolitan area five years ago and revealed its vulnerability, convinced state officials to offer to buy out homeowners in flood-prone areas, including the Lettieris’ Oakwood Beach neighborhood.

At first, the Lettieris resisted. They had owned their nearly paid-off home since 1987, raised five children in it and spent $138,000 to rebuild after the storm sent a surge over the nearby beach that filled their first floor with seawater.

But eventually, like nearly 80 percent of their fellow Staten Island residents who were offered the same opportunity, they took the deal, part of a New York state program to convert the most vulnerable neighborhoods into uninhabited buffer zones.

“I wish we could have stayed, but we couldn‘t,” said Frank, remembering a 1992 storm that also flooded them out. “The writing was on the wall. We had to go.”

Sandy, a late-season hurricane, killed at least 159 people in New York, New Jersey and other parts of the East Coast on Oct. 29, 2012, including a father and son who drowned in the basement of their home next door to the Lettieris. It damaged or destroyed more than 650,000 homes.

Much of the impetus for the home buyout program was an expectation that storms like Sandy will become more common, according to Lisa Bova-Hiatt, executive director of the Governor’s Office of Storm Recovery.

“To say that extreme weather is not our new normal would just be incredibly short-sighted,” she said.

Rising sea levels will increase the average number of storms that flood New York City with surges of at least 7.4 feet (2.3 m) to once every five years by 2030 from once every 500 years before 1800, according to a Rutgers University study published on Tuesday.

Using money from the U.S. Department of Housing and Urban Development, New York has spent $255 million to buy 654 properties, mostly in Staten Island, with 83 more in the pipeline, the Office of Storm Recovery said.

“The program is voluntary,” said Bova-Hiatt. “However, at some point it would be fantastic to have the entire area as a buffer zone.”

Bova-Hiatt, herself a Staten Island resident, said the state will never use its power of eminent domain to force out the Staten Islanders who declined buyout offers for 142 properties and can no longer accept them because the program has ended.

Once nestled in a tightly packed row of homes, a house on Fox Beach Avenue now stands alone in Oakwood Beach neighborhood in Staten Island, New York October 23, 2017. Since Superstorm Sandy swamped the New York metropolitan area five years ago, nearly 80 percent of the neighborhood’s residents have sold their homes to New York state under a program aimed at converting the area into an uninhabited buffer zone to protect against future storms. Picture taken October 23, 2017. REUTERS/Peter Szekely

But she declined to predict whether New York City would seize property for a planned seawall to protect 5.5 miles (8.9 km) of Staten Island’s east coast.

New Jersey also has a buyout program, having spent $110 million from the federal government to buy 520 properties in areas that were hit by Sandy-related flooding, according to the State Department of Environmental Protection.

Two residents of Staten Island’s Oakwood Beach section who declined to sell are Gregory and Olga Epshteyn. Their two-story home is among 88 that the state failed to acquire out of the 402 in the neighborhood that were eligible.

“This is the best place on Staten Island to live,” said Gregory, adding that the city still diligently provides services, such as garbage pickup and street lights.

“We love it here, but we miss our neighbors,” Olga added.

The Epshteyns’ home now has plenty of open space around it as Oakwood Beach and two other storm-ravaged sections of Staten Island return to their natural states.

Most of the bungalows, townhouses and other modest homes that lined the neighborhood’s narrow streets have been torn down and covered over with grass that the state maintains.

On a recent visit, the Lettieris, both retired, said they missed Oakwood Beach, but did not regret their decision to take the state’s offer and move to higher ground about a mile (1.6 km) away.

Former residents often come back on the anniversary of Sandy and many are expected to visit on this Sunday’s five-year mark.

Yuriy Domashov recently moved to the edge of Oakwood Beach after taking the state buyout for his oceanfront townhouse in another flood-prone area a few miles up the beach.

“For all my life I was connected to the water,” said Domashov, a veteran of the Soviet navy, as he walked his dog near the beach.

Having survived the 1986 Chernobyl nuclear disaster and an ordeal aboard his submarine, Domashov said he does not worry about another storm of the century.