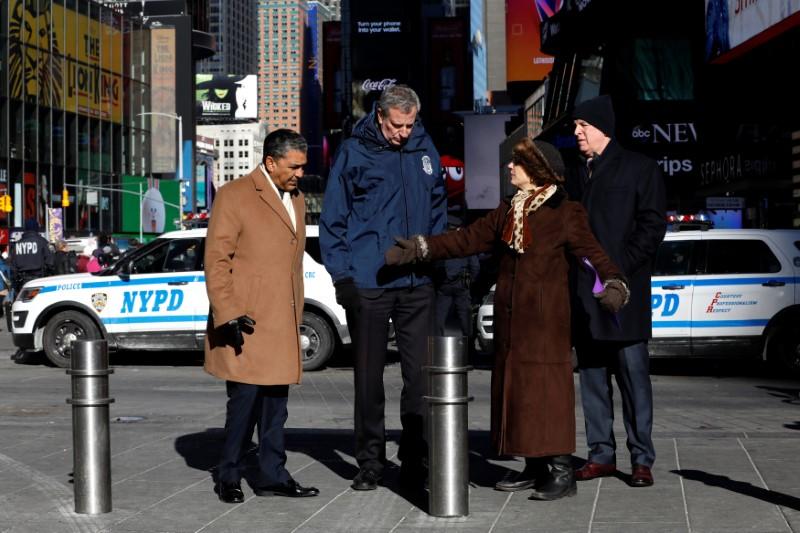 The thin, cylindrical, waist-height metal bollards are intended to be a more attractive alternative to the hulking concrete blocks the New York Police Department had deposited in busier areas around the city following the vehicle attacks, de Blasio said.

“We understand what’s happening around the world and we even saw some tragedies here,” the mayor said at a Times Square announcement in front of a line of the posts. Similar bollards were installed in Times Square in 2016.

There has been a spate of attacks on pedestrians in European and U.S. cities by people using cars or trucks, a tactic that the Islamic State militant group encourages its supporters to use. In July 2016, a driver used a truck to kill 86 people celebrating Bastille Day in Nice. Similar carnage unfolded at a Christmas market in Berlin a few months later.

De Blasio spoke within sight of the place where an intoxicated man in May steered a car along sidewalks for three city blocks, killing a young woman and injuring at least 22 people.

Last November, a man was charged with murder and providing support to Islamic State after he plowed down people on a Manhattan bike lane the previous month, killing eight.

“We know we have to do even more to keep people safe,” de Blasio said on Tuesday. The city will spend an additional $50 million on installing the new bollards in busy, high-profile areas and other efforts to protect public spaces, the mayor said.