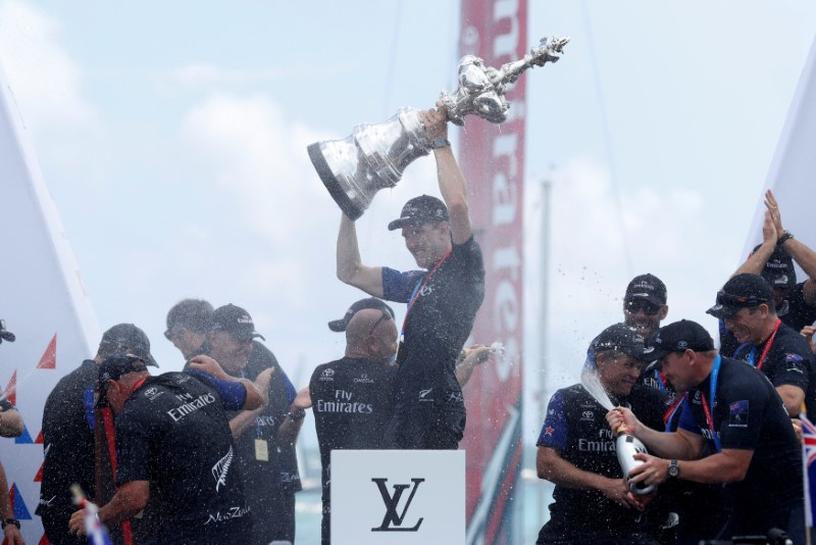 In doing so, Burling usurped New Zealand’s nemesis, Oracle Team USA skipper Jimmy Spithill, who won the cup in 2010 aged 30 and was hoping for a third successive victory.

Larry Ellison, the billionaire Oracle founder, dressed in Oracle Team USA kit, came ashore from his boat to greet both teams after a fascinating battle of wills and technology.

But the focus was on Olympic champion Burling, who showered his jubilant team mates and support crew with champagne after their sleek black, red and white catamaran crossed the line.

“We’re all ecstatic about what we have managed to achieve and we are on top of the world, it’s going to be a good night,” Burling said after coolly steering his space-age 50-foot (15 meter) foiling catamaran to yet another win over Spithill.

“They really were a class above in this America’s Cup… They outsailed us and had a better boat… really well done,” Spithill said, later adding that there were many things his team would have done differently.

Spithill, one of the world’s most successful sailors, said it was too soon to say what he or the U.S. team would do next.

The America’s Cup, named after the schooner “America” which won it off the south coast of England in 1851, has only been held by teams from the United States, Australia, New Zealand and Switzerland.

New Zealand won the right to take on the U.S. by beating four other “challengers” from Britain, France, Japan and Sweden, using cycling sailors dubbed “cyclors” to provide pedal power to control their catamaran’s vast “wing” sail and hydrofoils.

The Kiwis will now decide where, when and in what type of boat the next America’s Cup will be held and there have been questions over whether they will opt for high-octane catamarans, or revert to the monohulls used in previous cups.

CEO Grant Dalton did not detail his plans, but told a media briefing they would “play out in the next couple of weeks”.

One certainty for the other teams thinking of the next campaign is that Italy’s Luna Rossa, which is backed by the Italian luxury goods group Prada, has been chosen as the Challenger of Record for the 36th America’s Cup. [L8N1JM0HZ]

The New Zealand crew had been on a mission to wipe out the hurt inflicted when an 8-1 lead was overhauled by the U.S. team.

New Zealand skipper Glenn Ashby, who has a low-key but critical role “trimming” the giant wing with a games console-type device, was the only member of the crew defeated in 2013 in this year’s winning combination.

“Relief to right the wrongs of the last campaign,” Ashby said when asked how he felt.

Burling, who won Olympic gold last year in the 49er skiff class with fellow crew member Blair Tuke, has exuded a disarming calm and has now won a place in yachting history.

He has also brought a youthful confidence to New Zealand’s rejuvenated campaign to regain the “Auld Mug”, which Ashby called “this bloody trophy” in his victory speech.

Many have put New Zealand’s triumph down to the revolutionary “cycling” system developed to power the hydraulics needed to control the catamaran’s foils, which lift it out of the water, and the vast “wing” sail which drives it along.

Their “cyclors”, including an Olympic cycling medalist, have kept their heads down throughout the contest, pedaling furiously to provide enough oil in the system to allow the boat to perform almost balletic pirouette maneuvers on the water.

The sight of the boats skimming over the crystal clear waters of the natural sailing “arena” has drawn new audiences for sailing both in Bermuda and on television.

New Zealanders, in their uniform of black shirts and red socks, feted the victors with flags and cheers as Burling, Ashby and the team lifted the ornate silver trophy, which they later paraded triumphantly back to their base.