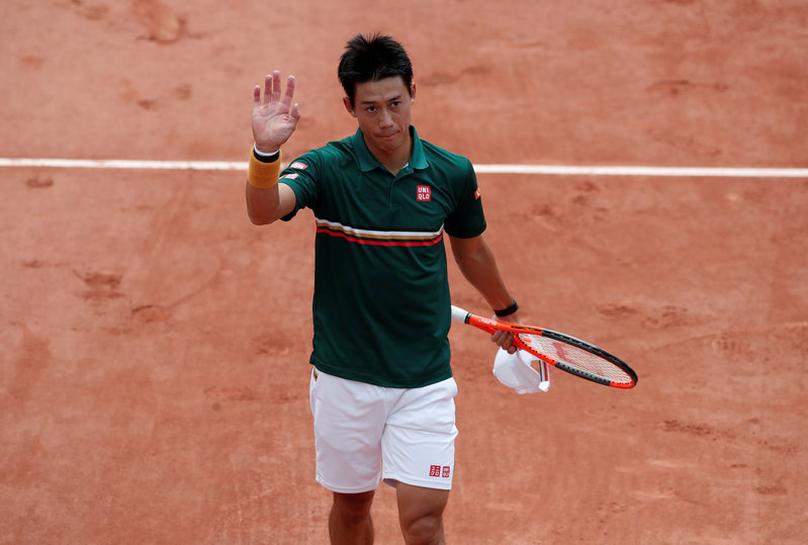 PARIS Kei Nishikori survived a two-set blackout to beat Chung Hyeon 7-5 6-4 6-7(4) 0-6 6-4 in their rain-delayed French Open third-round tie on Sunday, winning the first ever all-Asian battle at this stage of the tournament.

Japanese eighth seed Nishikori looked to be cruising into the fourth round on Saturday after grabbing the opening two sets against the in-form 21-year-old South Korean, who is ranked 67th in the world.

The bespectacled Chung battled back to force a tiebreak in the third, which he won, and then raced to a 3-0 lead before rain saved the day for Nishikori, who slammed his racket on the ground in frustration just before the rain interruption.

“I think the rain helped me a lot because I was really down in the fourth set and mentally I wasn’t ready,” Nishikori told reporters. “I knew I had to change something to beat him today, so I think I made some adjustments to make it a little better than yesterday.”

“Mentally I was a little more fresh, and physically, too, little more energy on my legs. That helped me a lot.”

On a sun-kissed Court One on Sunday, Chung, Asia’s rising tennis star, picked up where he had left off on Saturday to hand Nishikori his first grand-slam bagel in six years.

The experienced 27-year-old, in his 100th Tour-level claycourt match, recovered his composure in time though, taking more risks and playing the angles to stretch Chung.

He earned a break to go 4-1 up and won the three-hour, 51-minute marathon when Chung double-faulted on matchpoint.

“I am feeling pretty good tennis-wise and I try to be more positive and hopefully I can play another good one tomorrow,” the Japanese player said.

He will be facing well-rested Spanish claycourt specialist Fernando Verdasco, who eased past Pablo Cuevas in straight sets on Saturday, in the round of 16.