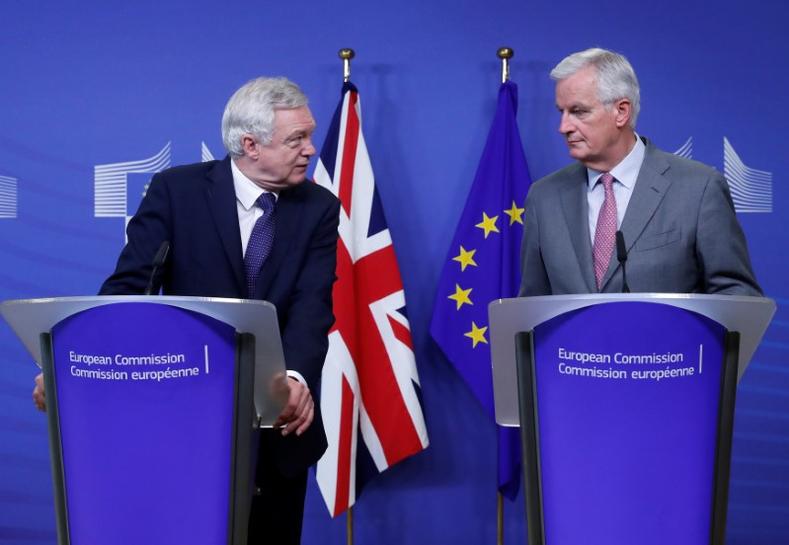 BRUSSELS (Reuters) – British and EU negotiators will not announce major breakthroughs on Thursday in their public account of this week’s first round of Brexit talks in Brussels, officials said on Wednesday.

“Constructive”, “polite” and “a good start” were typical comments from some of those involved since Monday in detailed discussions on a range of topics; there were also frustrations on both sides and continued profound disagreement on issues such as British payments and the role of EU courts after Brexit.

David Davis, the British Brexit minister, was returning to Brussels for talks early on Thursday with his opposite number, the European Commission’s chief negotiator Michel Barnier. They should give a political endorsement to the efforts of scores of civil servants and give a joint news conference on the results.

The talks involved a 98-strong visiting team from London, backed up by Brussels-based British diplomats, and Barnier’s 40-strong Brexit task force, backed up by other EU officials. Participants said both sides had achieved a better understanding of the other’s arguments, even if they do not agree on them.

Three more such weeks are planned by October with the aim of persuading leaders of the other 27 EU states that “sufficient progress” has been made on resolving key elements of a divorce package for Britain that they will open broader negotiations on a future free trading relationship between Britain and the EU.

On EU demands that Britain commit to paying a share of financial commitments that the Commission has estimated in the tens of billions of euros, British officials pressed for more detail on how Brussels was making its case but, for the time being, have not set out counter-arguments or other proposals.

Prime Minister Theresa May’s government said last week that both sides would have financial obligations to the other after Britain’s departure in March 2019. That was after some ministers had aggressively dismissed Brussels’ demands and said it might be the EU that will owe Britain.

It was still unclear, however, whether Davis will expressly agree with the assumption in Brussels that, however the calculation is worked out, the result will be that Britain pays the EU and not the other way around. EU officials said there was also discussion of how Britain’s long-standing rebate on EU budget payments should be treated in the calculations.

Neither side expects to come close to agreeing a figure by October but they are aiming to agree broad principles of how the figure will be calculated.

On the issue of the rights of expatriate citizens on either side of the new EU-UK border, there are areas of agreement in giving the 4.5 million people currently in that situation similar rights to today on either side. However, the talks also threw up new issues for both sides to discuss in detail.

And the EU’s demand that those rights for the 3 million EU citizens in Britain, as well as for the withdrawal treaty as a whole, to be overseen by the European Court of Justice remains a “red line” for British negotiators.

British officials believe they have shown EU counterparts that they were not ill-prepared, contrary to jibes in Brussels and at home from Brexit opponents. However, some EU officials voiced continued concern that the British were short on detail.

Participants spoke of greater harmony in talks on the future of Northern Ireland. Both sides stated commitments to prevent a new EU-UK border across the island from disrupting peace in the British province and discussed in detail how a pre-EU Common Travel Area between Britain and EU member Ireland works.

Concrete solutions to managing the border are not expected by October, as these will depend to a great extent on what new UK-EU trade agreements are reached. Both sides are also anxious not to upset efforts to establish a new devolved government in Belfast following a breakdown of the previous coalition.