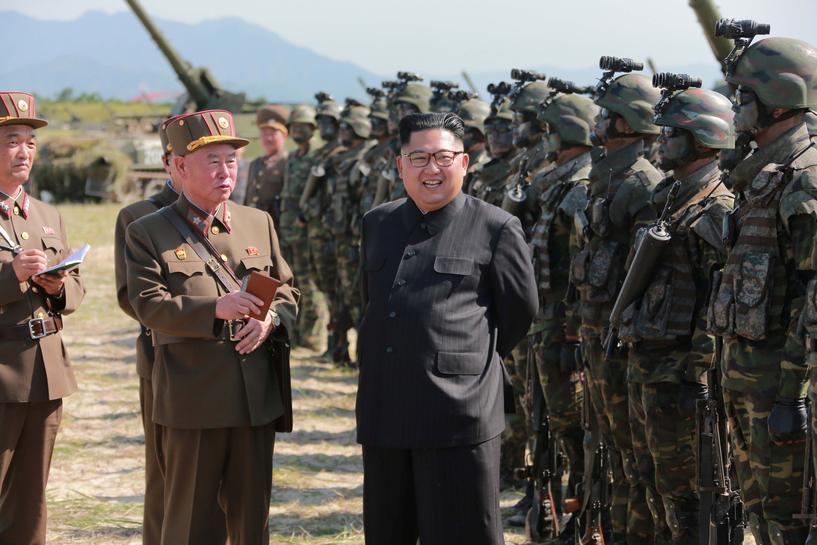 The South Korean Office of the Joint Chiefs of Staff said the projectiles flew in a northeasterly direction for about 250 kilometers (155 miles) into the sea.

Earlier, South Korea’s Yonhap news agency said a ballistic missile may have been fired, without citing a source.

Japan’s NHK broadcast said the projectiles did not appear to be objects that could threaten Japan’s safety.

The launch is the first by the North since it test-fired a missile on July 28 that could have been designed to reach 10,000 km (6,200 miles), putting parts of the U.S. mainland within reach.

North Korean leader Kim Jong Un guides a target-striking contest of the special operation forces of the Korean People’s Army (KPA) to occupy islands in this undated picture provided by KCNA in Pyongyang on August 25, 2017. KCNA via Reuters

The launch comes amid an easing of tension after weeks of harsh exchange of threats between North Korea and the United States after the North’s leader Kim Jong Un threatened to fire missiles into the sea near the U.S. Pacific territory of Guam.

On Wednesday, Kim ordered the production of more rocket engines and missile warheads during a visit to a chemical institute of the Academy of Defense Science, an agency that he fostered to develop its ballistic missile program.

Diagrams and what appeared to be missile parts shown in photographs published in the North’s state media suggested Pyongyang was pressing ahead with building a longer-range ballistic missile that could potentially reach any part of the U.S. mainland.

It is also believed to be developing a solid-fuel missile that could be used for submarine launches.

North Korea’s state media reported on Saturday that Kim had guided a contest of amphibious landing and aerial strike by its army against targets modeled after South Korean islands near the sea border on the west coast.

‘I Will Treat The Chinese Consulate as My Husband’s Cemetery’
Woman admits placing raw beef on neighbour’s doorstep because she thought he molested her
1 dormitory resident among 14 new COVID-19 cases in Singapore
Singapore tightens COVID-19 rules for travellers from India, eases measures for those travelling from Hong Kong
India COVID-19 surge hits new record as oxygen runs short