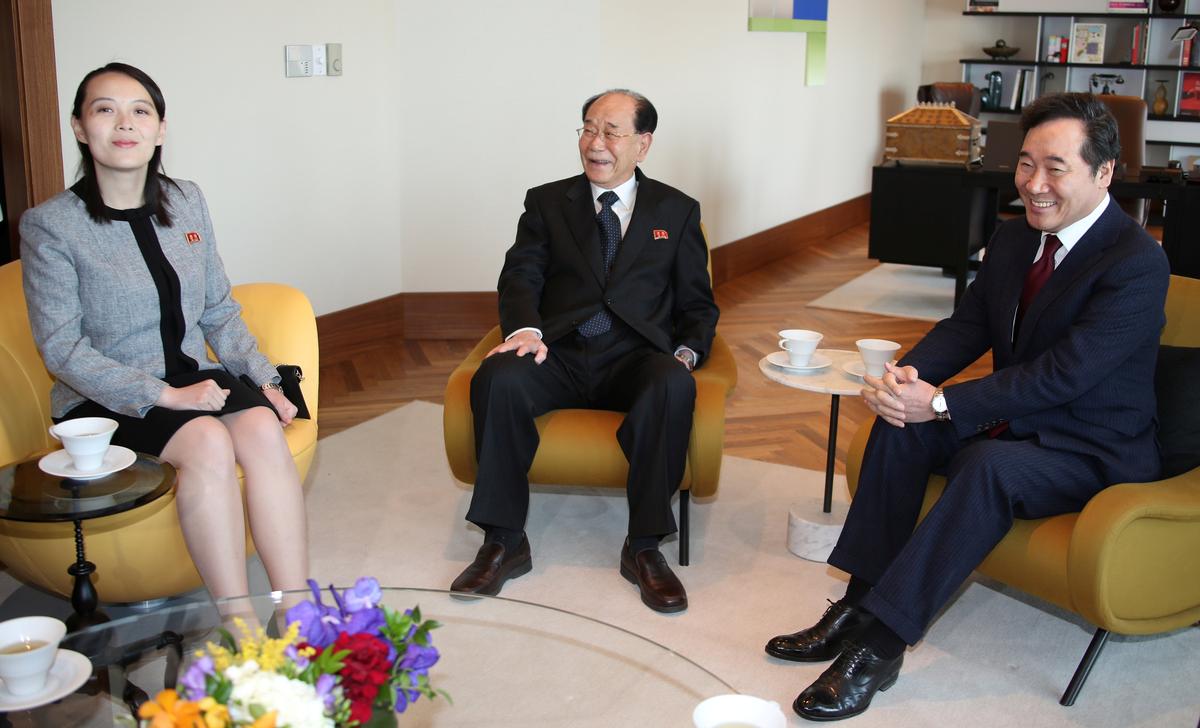 PYEONGCHANG, South Korea (Reuters) – North Korea has emerged as the early favorite to grab one of the Winter Olympics’ most important medals: the diplomatic gold.

That is the assessment of a former South Korean government minister and political experts who say the North has used the Games to drive a wedge between South Korea and its U.S. ally and to potentially ease pressure on its sanctions-crippled state.

In barely a month since North Korean leader Kim Jong Un surprised the world and said his nation was ready to join the Games, South Korean President Moon Jae-in has delayed military exercises, feted Kim’s sister at the Pyeongchang Olympics and given conditional consent to a bilateral summit in the North.

“North Korea clearly appears to be winning the gold,” said Kim Sung-han, who served as Korea’s vice foreign minister in 2012-2013 and who now teaches at Seoul’s Korea University.

“Its delegation and athletes are getting all the spotlight, and Kim Jong Un’s sister is showing elegant smiles before the South Korean public and the world. Even for a moment, it appears to be a normal state.”

U.S. Vice President Mike Pence, who attended Friday’s opening ceremony along with the North Koreans, said “no daylight” existed between the United States, South Korea and Japan on the need to isolate North Korea.

He said the North was using the Games for crude propaganda.

But it was Pence who cast one of the loneliest figures at the event. He remained seated when the joint Korean team entered the stadium, in contrast to Moon who stood along with Kim Jong Un’s younger sister, Kim Yo Jong, to applaud.

The warm North-South body language not only fanned talk of a split between Seoul and Washington, it contrasted with a cold encounter between South Korea and Japan, an ally in U.S.-led efforts to pressure North Korea to end its nuclear program.

Japanese Prime Minister Shinzo Abe, who looked uncomfortable at times during the opening ceremony, irritated his hosts by telling the South Korean leader that joint South Korea-U.S. military drills should be promptly resumed after the Games.

To pave the way for the North’s participation at Pyeongchang, South Korea had delayed the annual exercises with U.S. forces, which usually take place between February and March, until after the Olympics.

“Now is not the time to postpone U.S.-South Korea military exercises. It is important to move forward with the drills as planned,” Abe said, according to South’s presidential Blue House. Moon replied that it was not appropriate for Abe to have raised the issue, which he described as an internal affair.

Japan does not participate in the military exercises, but it is within reach of North Korean missiles and relies heavily on U.S. forces and their readiness to deal with that threat.

“This development could have been anticipated, but for Japan it’s a nightmare scenario,” said Takashi Kawakami, a professor of international politics at Takushoku University in Tokyo.

“North Korea is skilfully driving a wedge between the U.S., Japan and South Korea.”

A senior Japanese defense official said North Korea’s Games charm offensive could “simply be a way to gain time” until it completed its nuclear and ballistic missile development.

North Korea is under a heavy U.N. sanctions regime which was originally targeted at stopping the proliferation of arms and nuclear and missile technologies, but has become more all-encompassing after its accelerated missile testing.

After years of ineffective implementation, those sanctions may have begun to finally bite, which, according to a Japanese government official and experts, helps explain why Kim Jong Un agreed to send a national team and his sister to the Olympics.

A foreign resident living in the North Korean capital, Pyongyang, told Reuters he had seen fewer people in restaurants and luxury goods in shops in recent months.

Fuel prices have risen and more wood-fired Soviet-era trucks have been seen on the outskirts of the capital, said the resident, speaking on condition of anonymity. Seafood, once a major North Korean export, was now more widely available at home after U.N. sanctions banned these exports in August.

When a ferry carrying North Koreans to the Games docked in South Korea last week, the North asked its hosts for the fuel needed to get it home, Seoul’s Unification Ministry said. The North then withdrew its request after it asked for more fuel than Seoul was willing to provide, a Seoul official added.

In Pyeongchang, though, the two Koreas avoided talk of sanctions and basked instead in Olympic goodwill, which was nowhere more evident than on Saturday night when a joint Korean women’s ice hockey team took to the ice.

It inspired an American member of the International Olympic Committee to call for the team, which included 12 North Korean players, to be nominated for the Nobel Peace Prize.

In Pyongyang, North Korea’s official Rodong Sinmun newspaper also reported on the Games bonhomie, publishing photos of its ceremonial head of state clinking glasses with Moon and of the South’s leader also shaking hands with a telegenic Kim Yo Jong.

“The people I spoke to in Pyongyang were really excited about the joint team,” said Michael Spavor of the Paektu Cultural Exchange, an organization which took a group of tourists to Pyongyang last week.

“They felt it had made this tense situation on the peninsula calm down a bit.”

Singapore in ‘close contact’ with Hong Kong over ‘severe’ COVID-19 situation there ahead of air travel bubble launch
PM Suga says Japan to lead international efforts on climate change
Commentary: How COVID-19 has forced employers to be more human – and rewards them in the process
Commentary: China’s the only major economy growing this year. That’s not enough
Tesla plans to produce electric car chargers in China