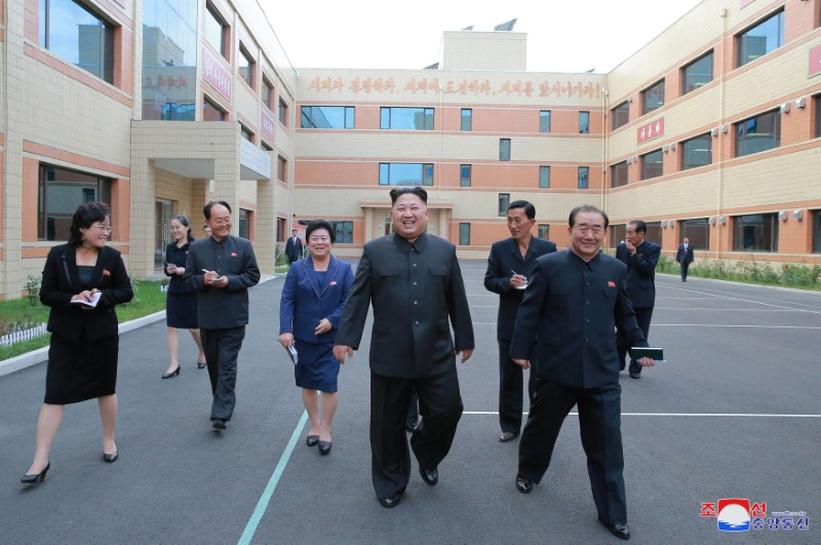 Tensions between North Korea and the United States have been building after a series of weapons tests by Pyongyang and bellicose verbal exchanges between U.S. President Donald Trump and North Korean leader Kim Jong Un, stoking fears any miscalculation could lead to an armed confrontation.

The South Korean fishing boat was seized on Oct. 21 and investigation by the North had proved the boat and crew had entered North Korean waters for fishing, the KCNA report said.

North Korea decided to release the boat after “taking into account the fact that all the crewmen honestly admitted their offence, repeatedly apologizing and asking for leniency,” the report said in English.

The vessel and its crew would be released in waters at the military boundary between the two Koreas, which are still technically at war after their 1950-53 conflict ended in a truce not a peace treaty.

North Korean fishing boats have been found drifting south of the maritime border between the two Koreas at times, often having run out of fuel or broken down. Most North Korean crew are released to the North after interrogations by intelligence officials if they wish to return. It is more unusual for South Korean fishing vessels to be found under similar circumstances.

A South Korean Unification Ministry official said it was aware the fishing boat had gone missing earlier in the week. The crew of 10, including seven South Koreans and three Vietnamese, would be questioned by officials on their return, he added.

The last time North Korea released a South Korean ship was in September 2010 roughly a month after a fishing vessel had accidentally drifted north of the maritime border following engine malfunctions.

The proposed return of the crew would avoid a potential flashpoint to the months-long standoff between Pyongyang and South Korea and its U.S. ally.

Ahead of a visit by Trump to Asia starting next week, Mattis has emphasized diplomatic efforts to find a peaceful solution to the current crisis during his week-long trip to the region.

“I carried the message that the more we do together today the greater the chance for enduring peace in the future,” Mattis said earlier this week following three days of meetings with Asian defense chiefs in the Philippines.

“That’s really what it was all about – to keep the (North Korea) effort firmly in the diplomatic lane for resolution.”

Even before landing in Seoul, Mattis held a meeting in the Philippines on Monday with his South Korea and Japanese counterparts, where they agreed to keep bolstering intelligence sharing about North Korea and enhance exercises.

Japanese Defence Minister Itsunori Onodera warned the threat from North Korea has grown to a “critical and imminent level”.

CIA chief Mike Pompeo said last week North Korea could be only months away from developing the ability to hit the United States with nuclear weapons, a scenario Trump has vowed to prevent.

U.S. intelligence experts say Pyongyang believes it needs the weapons to ensure its survival and have been skeptical about diplomatic efforts, focusing on sanctions, to get Pyongyang to denuclearize.

The United States on Thursday imposed sanctions on seven North Korean individuals and three entities for “flagrant” human rights abuses, including killings, torture, forced labor and the hunting down of asylum seekers abroad.

Trump, in a speech last month at the United Nations, threatened to destroy North Korea if necessary to defend itself and allies. Kim has blasted Trump as “mentally deranged.”

Despite the rhetoric, White House officials say Trump is looking for a peaceful resolution of the standoff. But all options, including military ones, are on the table.

“Do we have military options in defense for attack, if our allies are attacked? Of course we do. But everyone is out for a peaceful resolution,” Mattis told reporters traveling with him earlier this week.

“No one’s rushing for war.”

PM Lee Hsien Loong and other ministers speak out against racism after alleged attack
Chinese Rights Lawyer Calls For End to Travel Ban, Daughter in ICU
Khaw Boon Wan to be chairman of entity managing SPH’s media business
Malaysia to be placed under another nationwide MCO from May 12: PM Muhyiddin
Commentary: Booster shot for COVID-19: Not everyone needs it