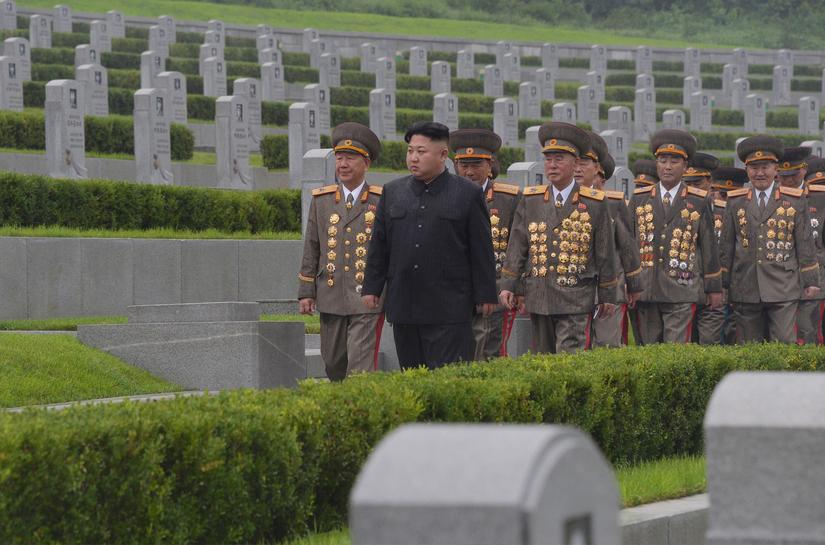 SEOUL/TOKYO/WASHINGTON (Reuters) – North Korea fired a missile on Friday that experts said was capable of striking Los Angeles and other U.S. cities and the United States and South Korea responded by staging a joint missile exercise, the South Korean news agency Yonhap said.

The Trump administration, which has branded North Korea the “most urgent and dangerous threat to peace,” condemned the launch as reckless.

“By threatening the world, these weapons and tests further isolate North Korea, weaken its economy, and deprive its people,” President Donald Trump said in a statement. “The United States will take all necessary steps to ensure the security of the American homeland and protect our allies in the region.”

“As a result of their launches of ICBM-level missiles, this clearly shows the threat to our nation’s safety is severe and real,” said Japanese Prime Minister Shinzo Abe, who planned to call a meeting of his National Security Council.

The Trump administration has said that all options are on the table, including military ones, however it has also made clear that diplomacy and sanctions are its preferred course.

Later the United States and South Korea conducted a live-fire ballistic missile exercise in a display of firepower that South Korea’s joint chiefs said showed their capabilities for a “precise strike on the enemy’s leadership,” Yonhap reported.

The two allies had staged a similar exercise after the North Korean test earlier in the month.

The launch from North Korea’s northern Jangang province took place at 11:41 p.m. (1441 GMT), an official at South Korea’s Office of the Joint Chiefs of Staff said.

The South Korean military said the missile was believed to be an ICBM-class, flying more than 1,000 km (620 miles) and reaching an altitude of 3,700 km (2,300 miles). In Washington, the Pentagon also said it had assessed that the missile was an ICBM.

U.S. officials said the Defense Intelligence Agency (DIA), the Pentagon spy agency, has determined that North Korea will be able to field a reliable nuclear-capable ICBM by next year, earlier than previously thought.

Jeffrey Lewis of the California-based Middlebury Institute of International Studies said the launch showed Los Angeles was within range of a North Korean missile, with Chicago, New York and Washington, just out of reach.

“They may not have demonstrated the full range. The computer models suggest it can hit all of those targets,” he said.

The U.S.-based Union of Concerned Scientists said its calculations showed the missile could have been capable of going as far into the United States as Denver and Chicago.

Michael Elleman of the International Institute for Strategic Studies said the window for a diplomatic solution with North Korea “is closing rapidly.”

“The key here is that North Korea has a second successful test in less than one month,” he said. “If this trend holds, they could establish an acceptably reliable ICBM before year’s end.”

Los Angeles would be protected by the U.S. missile defense network, which includes four ground-based interceptors at Vandenberg Air Force base, 150 miles north of the city, and a second battery of 32 missiles in Alaska.

During a test on May 31 the missile defense system shot down an incoming ICBM missile aimed at the U.S. mainland and a Pentagon spokesman said the military had “confidence in our ability to defend against the limited threat.”

Other authorities say the United States may not be able to seal itself off entirely from a North Korean ICBM attack.

A Day After Sanctions

Trump spoke with Abe and Chinese President Xi Jinping about North Korea’s nuclear arsenal this month and has become frustrated that China has not reined in its ally Pyongyang.

Pentagon spokesman Captain Jeff Davis said Friday’s launch had been expected and took place from Mupyong-ni, an arms plant in northern North Korea. It came a day after the U.S. Senate approved a package of sanctions on North Korea, Russia and Iran.

The European Union called it “an outright violation” of international obligations and a serious threat to international peace and security, and urged North Korea to engage in dialogue to pursue denuclearization of the Korean peninsula.

EU foreign policy chief Federica Mogherini would discuss the matter with the foreign ministers of South Korea and other partners at the ASEAN ministerial meeting in Manila on Aug. 6-7.

The data on the trajectory indicate the missile was fired at a sharply lofted angle but packed more power than the missile launched on July 4 that U.S and South Korean officials said was an ICBM, potentially capable of hitting the U.S. mainland.

U.S. intelligence officials say that even if North Korea develops a reliable, nuclear-capable ICBM, which some say it remains several steps short of doing, the weapon would be almost useless except to deter the conventional attacks that Kim fears.

“Kim is determined to secure international recognition of the North as a nuclear armed state, for the purposes of security, prestige, and political legitimacy,” the National Intelligence Council’s January Global Trends report said.

Reporting by Jack Kim in Seoul, Elaine Lies and William Mallard in Tokyo, Idrees Ali and David Brunnstrom in Washington and Philip Blenkinsop in Brussels; Writing by Philip Blenkinsop and Bill Trott; Editing by John Stonestreet and James Dalgleish