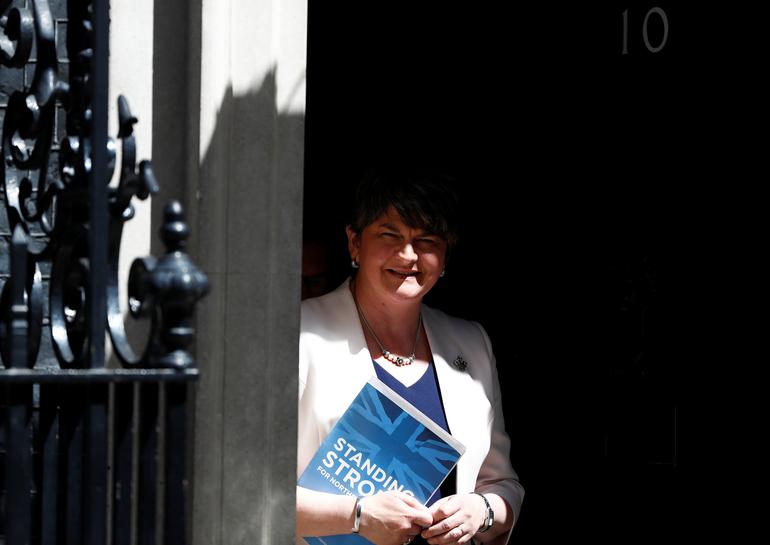 BELFAST/LONDON The leaders of Northern Ireland’s two main political parties said on Tuesday talks on a new power-sharing executive in the British province had broken down and no agreement was expected in the near future.

Northern Ireland’s political scene has been in crisis since the collapse in January of the coalition mandated under a 1998 peace deal that ended three decades of sectarian Protestant-Catholic violence in which 3,600 died.

The Irish Catholic nationalist Sinn Fein and the Protestant pro-British Democratic Unionist Party (DUP) have been in talks since a March election to form a new power-sharing government. Each has blamed the other for missing repeated deadlines – most recently last Thursday.

The British government, which is jointly overseeing the talks alongside Ireland’s government, warned on Monday that it would have to step in to manage public spending in the province, and might call new elections unless a deal was reached soon.

Both parties said on Tuesday that no deal had been agreed and that progress was not expected in the near future. A source in Sinn Fein said a deal was unlikely before September.

“Obviously we are disappointed that we don’t have an agreement this afternoon and indeed we’ve been disappointed for quite some time that we haven’t been able to reach an agreement,” DUP leader Arlene Foster told reporters.

“However we are going to keep working at it over the summer and hopefully we can come to an agreement later on in the year.”

Sinn Fein blamed the impasse on British Prime Minister Theresa May, who struck a separate deal last week with the DUP to support her minority government in the British parliament – something they say has compromised the government’s neutrality.

“What this constitutes is a monumental failure on behalf of Theresa May. She has set back decades of work that has been done here throughout the years,” said Sinn Fein’s Northern Ireland leader, Michelle O’Neill.

Commentators see little prospect of agreement during the July marching season, when pro-British unionists celebrate the 1690 victory by Protestant King William of Orange over his Catholic rival at the Battle of the Boyne.

Britain’s Northern Ireland minister, James Brokenshire, signalled he would be prepared to wait for a deal. He said the government wanted to remain engaged in the talks, and that the overriding priority was to reach an agreement on restoring the executive.

The DUP and Sinn Fein alike have been buoyed by historic electoral breakthroughs in recent months – Sinn Fein in regional elections in March and the DUP in Britain’s general election last month – and both are reluctant to be seen to give ground to their rivals.

“The Sinn Fein electorate will not consent to be governed by DUP on DUP terms,” Sinn Fein leader Gerry Adams said.

The Irish and British governments have warned that failing to forge a deal would have “profound and serious” implications and limit Northern Ireland’s influence in Britain’s negotiations to leave the European Union, although no one is forecasting a return to serious violence.

(Reporting by Michael Holden in London and Conor Humphries; writing by William James; editing by Andy Bruce and Mark Heinrich)